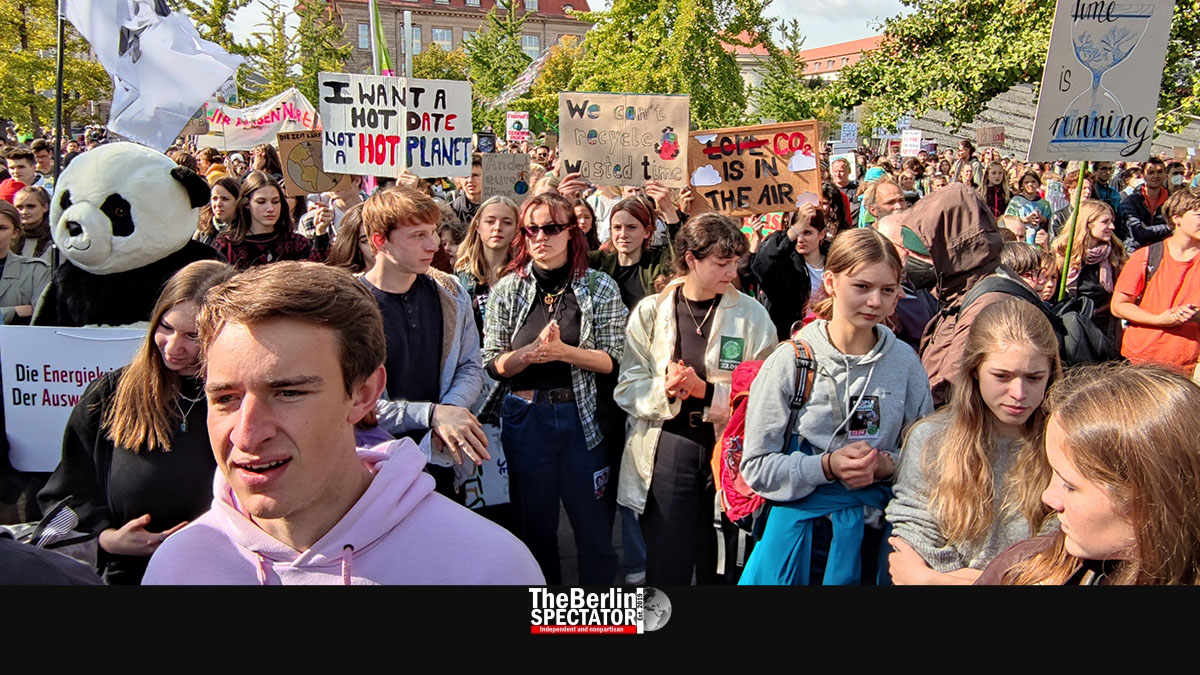 German school kids and their supporters joined rallies for a more radical climate policy in several cities today. In Berlin, thousands of students gathered at Invalidenpark to demand more action for the climate.

Berlin, September 23rd, 2022 (The Berlin Spectator) — When the protest commenced at noon, Berlin’s Invalidenpark filled up quickly. Mostly kids from secondary schools appeared to show the Fridays for Future movement (F4F) is still here, and to pressure the government into doing more. “The crises are serious, but we will get together and be loud!”, the Berlin chapter of F4F said.

Billions for the Climate

Before the protest started moving through the Mitte borough, speakers talked to the crowd, a poetry slammer by the name of Veronika Rieger and the band Von Wegen Lisbeth performed. Chancellor Olaf Scholz was accused of not doing enough. F4F want his government to allocate 100 billion Euro (97.5 billion U.S. Dollars or 88.3 billion Pounds Sterling) for the fight against climate change. Earlier this year, Scholz had announced the same amount would be invested into the Bundeswehr, Germany’s armed forces.

“I want a hot date, not a hot planet”, a sign brought by one of the protesters read. Another one said “We can’t recycle wasted time”. Immediate action and a sharp reduction of CO2 emmissions were some of the demands expressed on other signs, and verbally. Yet another banner held by a girl said “Save the bees, clean the seas, plant more trees”. Several other organizations supported today’s protest, including Greenpeace.

This time, younger kids who came with their teachers or parents had their own block in the protest. On the street next to the park, the Berlin Police Department protected the rally and the thousands of additional participants who kept on coming. At some point, when it got too crowded, Invalidenstrasse was blocked to motorized traffic. Officers tried to get trams through the masses of people because they could not bypass the location.

Today’s ‘Climate strike’ was supposed to be global. In Germany alone, protests in 270 cities and towns were going to take place, with hundreds of thousands of participants in total. They included Hamburg, Munich, Frankfurt and Cologne, just to name a few.

F4F wants the government to invest into sustainable energy sources more. At this stage, the share of green energy in Germany’s mix is at about 50 percent, and therefore very high, in comparison to many other countries. The Federal Republic’s largest source is wind energy. It alone has a share of 38.2 percent.