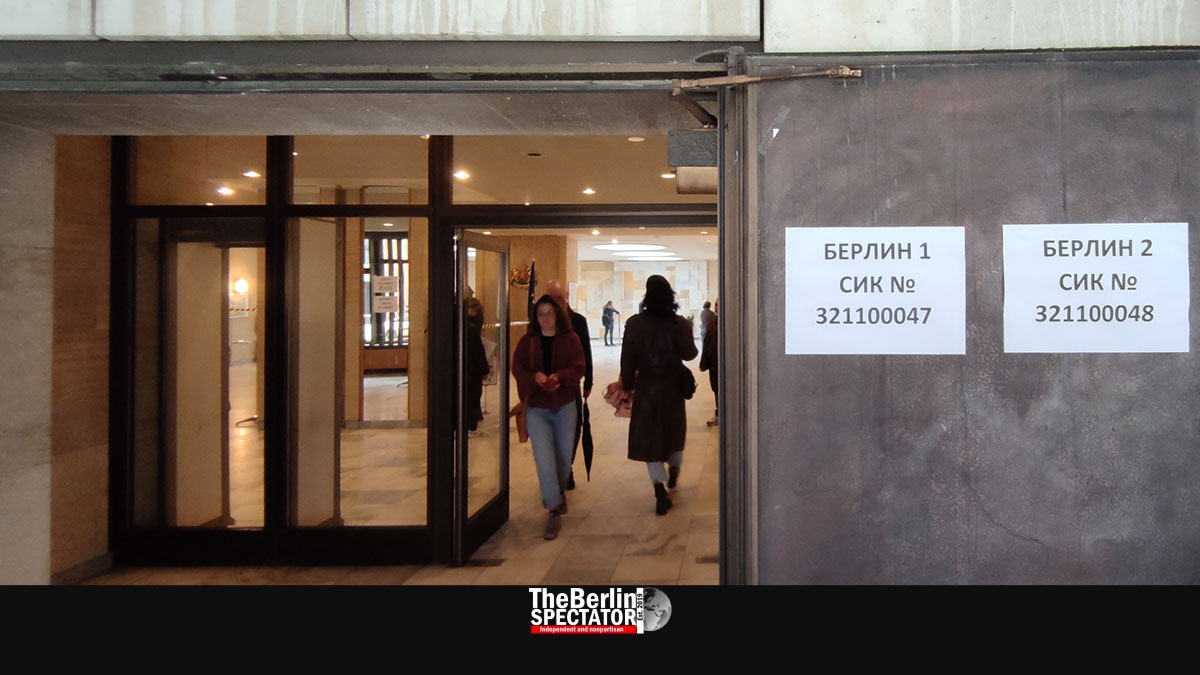 Thousands of Bulgarian citizens who live in Berlin went to their Embassy today in order to take part in the Bulgarian parliamentary elections. It is the fourth time they voted within one and a half years.

Berlin, October 2nd, 2022 (The Berlin Spectator) — Berlin has a very Bulgarian area. The country’s Embassy is located at the intersection of Leipziger Strasse and Mauerstrasse. Across the street, Bulgaria Air’s office and the Bulgarian Cultural Institute can be found. A Saturday school around the corner offers Bulgarian language and history classes for Bulgarian kids who grow up in the German capital.

More than a quarter million Bulgarians live in Germany. They are all over the place, but many of them live in Berlin. Some went to the Embassy today, to cast their votes in their country’s fourth election in eighteen months. In April of 2021, elections took place in Bulgaria, the European Union’s poorest country located on the Balkan peninsula. Since no government coalition could be formed, another round of elections became necessary in July of 2021.

Again, there was no new government coalition, which is why yet another election day was scheduled for November of last year. When it was over, Bulgaria got the most progressive Prime Minister it ever had. Kyril Petkov, a pro-Western former business man, managed to form a coalition consisting of four parties, but it was shaky. Recently, the new head of government did not survive a vote of no confidence and was replaced by an interim government chosen by President Rumen Radev who was supported by the Socialists when he took office.

Today, the fourth election since April of last year took place, both in Bulgaria itself and at many of the state’s Embassies and Consulates, mainly those in Europe and North America. Some Bulgarians seem to be tired of voting, in spite of the fact that this election is very important because it is about big questions, including this one: What kind of relations should Sofia have with Moscow during Russia’s war of aggression against Ukraine?

Besides, Bulgaria has countless severe problems that have not been resolved since the country joined the E.U. on January 1st, 2007. They include poverty, corruption on all levels, racism and discrimination, especially against the members of its large Roma minority, but also towards the LGBTI community, and severe environmental issues. Boiko Borrisov, the founder and leader of the GERB party who governed Bulgaria from 2009 to 2021 most of the time, and who might get most votes again today, never resolved those problems.

Before Petkov was Prime Minister for a few months, Borissov, who used to be a bodyguard for communist dictators and a firefighter some decades ago, ran a coalition he formed with the ‘United Patriots’, a group of extremist right-wing parties. It is unclear whether he, or whoever heads the strongest party, will be able to form a government coalition this time. If not, another round of elections might become necessary.

At the Bulgarian Embassy in Berlin, four voters told The Berlin Spectator they neither wanted Borissov, nor right-wing extremists or pro-Russian politicians to head the next government in Sofia. After casting their votes, groups of Bulgarian expatriates gathered outside the Embassy to exchange their opinions and do some small talk, on a rainy day in Berlin.