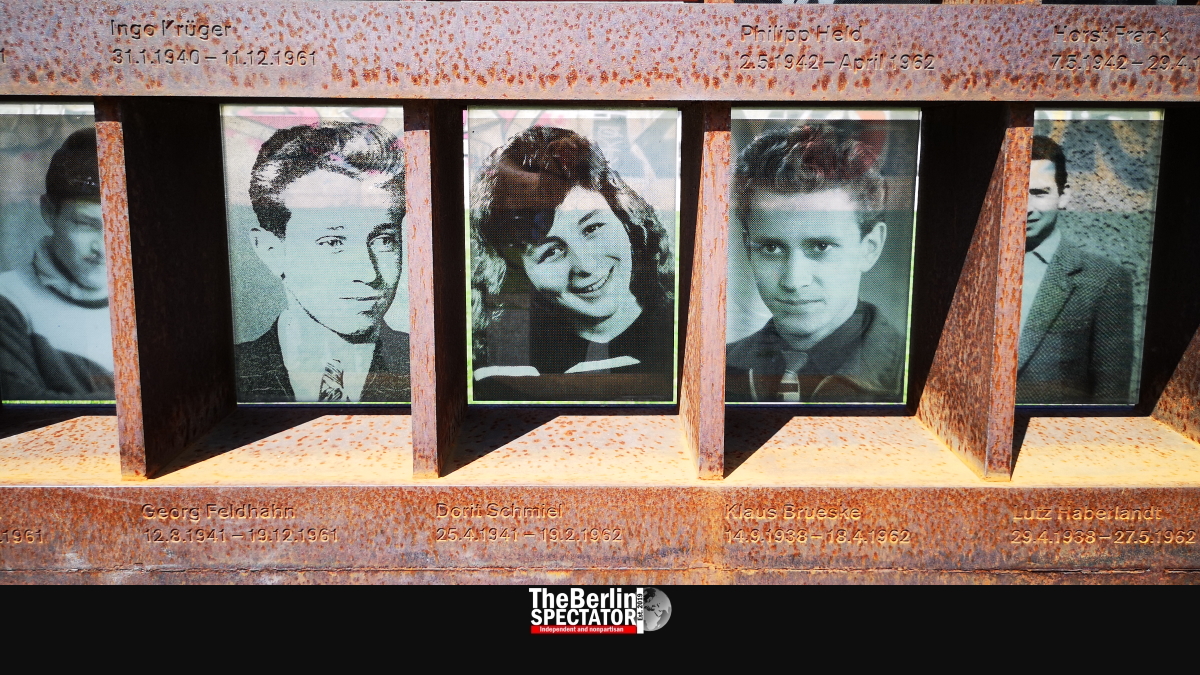 Thirty-three years after the fall of the Berlin Wall, some small parts of it are still standing. Here, the remainder is a reminder of the fact that freedom does not come for free. The Berlin Wall Path is a good route to follow.

Berlin, November 1st, 2019. Update: October 3rd, 2022 (The Berlin Spectator) — West Berlin was a democratic, free enclave. It was surrounded by the communist GDR, which was a member of the Warsaw Pact. In its capital, East Berlin, dictator Walter Ulbricht assured the world on June 15th, 1961, that “nobody has the intention of building a wall.” Only a few weeks later, the Berlin Wall was built anyway.

The Wall stood for 28 years. In 2019, the 30th anniversary of its fall was celebrated. Parts of the Wall are still standing in today’s Berlin, as reminders for the fact that freedom and democracy need to be won and defended, even today. One excellent way of looking into Germany’s recent history is to follow the Berlin Wall Path.

On the Path, we learn that the Wall between East Berlin and West Berlin was 43.1 kilometers (26.8 miles) long, while the part separating West Berlin from the GDR, outside the city, had a length of 111.9 kilometers (69.5 miles). The construction was 3.6 meters (11 feet) high. There was an inner and an outer part, and a border strip in between.

Along the path, signs inform visitors about the Cold War, the divided city during that period, the Wall itself and its victims. Photos show what the area they are located in looked like when the Wall was still standing. Tracking the Berlin Wall Path online, on smart phones, makes sense also because some signs are missing.

The closer we get to the city center, the more information signs pop up on the sidewalks. Some of them commemorate GDR citizens who were murdered by GDR border guards during their attempts to climb or overcome the Wall otherwise. In Bernauer Strasse, the impressive Berlin Wall Memorial appears.

At the Memorial, visitors can directly compare, by looking at huge photographs taken before 1989 and today, at the same spots. Pieces of the Berlin Wall and other items can be seen, touched and felt.

At least 140 people were murdered during their escape attempts from East to West Berlin. Their photographs are part of the Berlin Wall Memorial (see main photo at top of page). All these people wanted was freedom. They died for it. Georg Feldhahn, Dorit Schmiel and Klaus Brueske were among the first to be killed for trying to leave East Germany. It would take decades until those murders had legal consequences.

There are more memorials all over Berlin. Before Corona hit, American, British, French and Spanish tourist groups on bikes were being rushed from one sightseeing spot to the next, along the Berlin Wall Path, on a daily basis. Many of these visitors were not even conceived when the Wall fell in 1989.

Between the bridges ‘Oberbaumbrücke’ and ‘Schillingbrücke’, and between ‘Marshall-Brücke’, named after former U.S. Secretary of State George Marshall, and ‘Hugo Preuss-Brücke’, the Spree river used to be the border between East and West Berlin. Many refugees who tried to swim across, to the West, were shot by the GDR regime’s henchmen.

Close to the Wall Path, the ‘Bush Kohl Gorbachev Monument’ honors three politicians who contributed a lot to making the reunification of Germany possible after the fall of the Wall.

The Berlin Wall can also be seen and shot on a million selfies at ‘Potsdamer Platz’, one of the most frequented sightseeing spots in Berlin. Tourists used to come here 365 days per year, all day long, before Corona. Not quite as many tourists were counted in the summer of 2022, but their number was increasing again.

The Berlin Wall symbolized the Cold War. And it still does. Had any escalation lead to an all-out thermonuclear war, both East and West Germany would have been flattened within minutes. So many missiles with nuclear warheads were pointed at both countries.

The most crowded spot of them all is Checkpoint Charlie. Here, hundreds of tourists on bikes and e-scooters used to meet entire bus loads of fellow vacationers from all over the globe. Sightseeing buses and the usual traffic tried to squeeze through the crowd. This place used to be a mess, and has become one again. A few years ago, fake soldiers who charged a lot of money for photos were banned from the site.

Between ‘Kreuzberg’ and ‘Treptow’, part of Landwehr Canal was the border. More towards ‘Neukölln’, the Wall separated streets, including ‘Bouchéstrasse’. One side was the GDR, the other was the Federal Republic (FRG). When they looked out their windows, residents saw a giant Wall.

In parts of Berlin, a double line of cobble stones marks the Wall’s pathway. The line runs along streets, through parks and construction sites. Some residents are unaware of what those cobble stones mean, others have been living there for a long time and know exactly where they are.

Some of the GDR’s watch towers still exist. They are being seen as small memorials too. But Berlin just cannot do it all at once. Some towers will have to wait before they are being restored to the way they looked during the Cold War.

In Berlin’s ‘Plänterwald’ borough, on ‘Kiefholzstrasse’, yet another memorial can be found. It is one of the most impressive ones. This one commemorates the children who were murdered at the Berlin Wall. Jörg Hartmann was 10 years old when he was shot at this location, Lothar Schleusener was 13.

In south-eastern Berlin, the Wall Path runs through the beautiful ‘Heidekampgraben’ park. It is just the right place for nice bicycle rides or walks. Exploring the Berlin Wall Path is a good experience. Doing it by bike, and taking several days to follow it, makes sense.

A map that shows the Berlin Wall Path’s route can be found here.