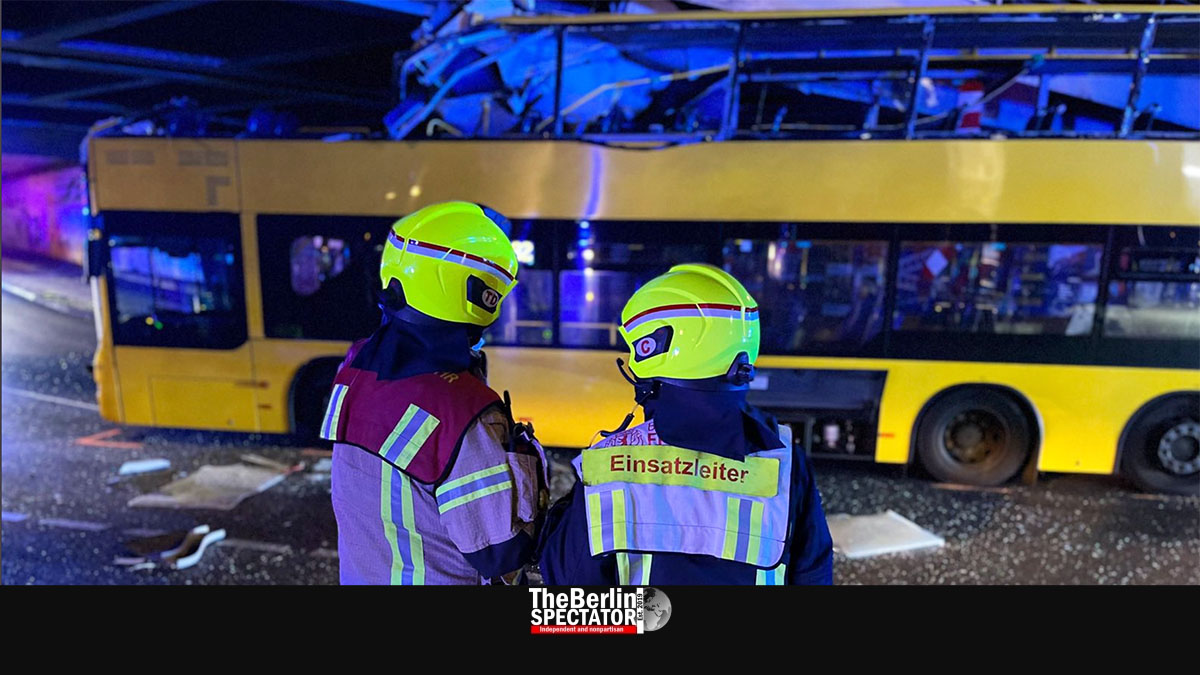 A series of accidents in Berlin has led to loss of life and partially severe injuries. A woman was killed when she was hit by a train. Earlier, a cyclist collided with a car and died as well. On Thursday, a double decker bus got stuck under a bridge.

Berlin, October 7th, 2022 (The Berlin Spectator) — In the past days, two deadly accidents happened in Berlin. On Thursday in the late evening, a double-decker bus owned by the public transport provider BVG got stuck under a bridge on Bergstrasse in the German capital’s Steglitz borough. According to the Berlin Fire Department, five persons got hurt. Two of them sustained severe injuries.

As a photo shot by the Fire Department (see top of page) shows, the front part of the vehicle’s upper floor was destroyed completely. Obviously, the bus was not on its regular route. It is unclear how the extremely high vehicle could end up under a rather low bridge. The investigation is ongoing. Because of the accident, the bridge will have to be checked as well.

An even more serious accident occurred yesterday in Hellersdorf in Berlin’s east. At a stop located at the intersection of Zossener Strasse and Kastanienallee, a woman was hit by a tram. The victim died right there. Medics tried to revive her, but were not successful. In this case as well, the investigation is ongoing. At this point, the police do not know how exactly it happened.

In the past days, there were two accidents that involved children. On Tuesday, a 32-year-old mother and her 2-year-old daughter were moving along Strasse der Pariser Kommune in the Friedrichshain borough. A motorist who was moving in the opposite direction took a left turn. For some reason, the driver did not see the bicycle and collided with it. The little girl had to be taken to a hospital with severe head injuries.

Yesterday, another mother wanted to cross Prinzenallee, a major street in the Gesundbrunnen area, with her 5-year-old son. A 41-year-old woman who illegally drove on a bike lane, did not see and hit them, according to a police report. This boy suffered a head injury as well. The police is conducting yet another investigation here.

On Monday, a cyclist was killed at Ermslebener Weg in Wilmersdorf. He was hit by a car whose driver tried to make a turn. The 74-year-old cyclist died of his injuries on the scene of the accident. In this case, the motorist seemed to have the right of way. This victim was the seventh cyclist to die on the streets of Berlin since this year commenced.

Germany: Number of COVID-19 Patients in Intensive Care on the Rise