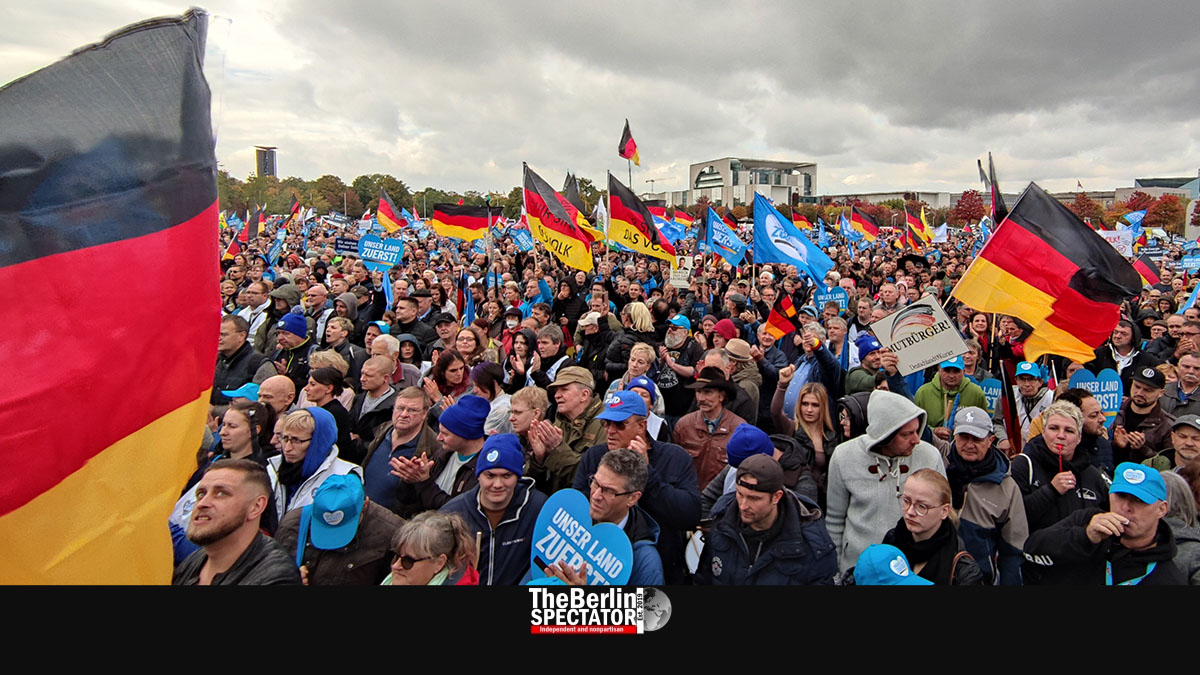 In Berlin, thousands of supporters of the radical right-wing ‘Alternative for Germany’ (AfD) gathered in front of the Reichstag building on Saturday. Prominent members slammed the government for its climate and foreign policy. The police were very busy.

Berlin, October 8th, 2022. Update: October 9th. 2022 7:12 p.m. CEDT (The Berlin Spectator) — In Berlin, the extremist AfD tried to launch a series of protests against the government. It is supposed to continue throughout the cold season. The far-right party is hoping the energy crisis caused by Moscow will increase the number of followers it has. Recent polls suggest that the plan might work, at least in part.

Under a cloudy sky, some 3,000 people assembled on the big lawn in front of the Reichstag building which accommodates the Bundestag. Later, the crowd gew to more than 10,000 participants. Stephan Brandner, one of the AfD’s co-leaders, accused Germany’s government of having brought the country to the brink of war. In parliament, he had to look into the faces of “failed existences” every day, Brandner told the protesters. “But here, I see happy faces.”

Tino Chrupalla, the AfD’s chairman, said Germany’s public service broadcasters were spreading propaganda and turning countries against each other. Their goal was to pull the Federal Republic into the war, he actually stated. Berlin’s AfD boss Kristin Brinker said only her party had the courage to speak the truth.

Some of the protesters carried signs. “In the name of the people and the economy, we demand the resignation of the government”, one of them read. “We are the consequence of your incompetence”, another sign said. The AfD itself hung up signs that said “Our country first!”. Obviously, they borrowed it from former U.S. President Donald Trump’s “America first” slogan, which his predecessor Woodrow Wilson, but also the Klu Klux Klan, used before him. On yet another sign, the democratically elected Chancellor Olaf Scholz, Interior Minister Nancy Faeser and Commerce Minister Robert Habeck were called “enemies of the state”. Thirty-one participants were arrested.

Several counter demonstrations took place as well. One was organized by the group ‘Grandmothers Against Right-Wing Extremism’ (‘Omas gegen Rechts’), another by the far-left Antifa. Shortly after the AfD rally commenced, there was an incident. Some twelve Antifa members managed to sneak into the area the police reserved for the AfD demonstration. At this moment, a brawl commenced. Thanks to the quick reaction of some police officers, an escalation was prevented. The counter protesters were taken back to their area.

A total of 1,900 police officers dealt with today’s demonstrations. Since the Berlin Police Department could not cope on its own, colleagues from several other federal states, including Brandenburg, Schleswig-Holstein and Saxony-Anhalt, were in Berlin to help. Berlin’s government quarter was off limits to motorized traffic. One of the biggest challenges for the police was to keep the AfD rally and the counter demonstrations away from each other. But chants by the AfD’s opponents, such as “Say no to Nazis!”, were heard near the Reichstag as well.

Long-Distance Trains in Northern Germany Out of Service