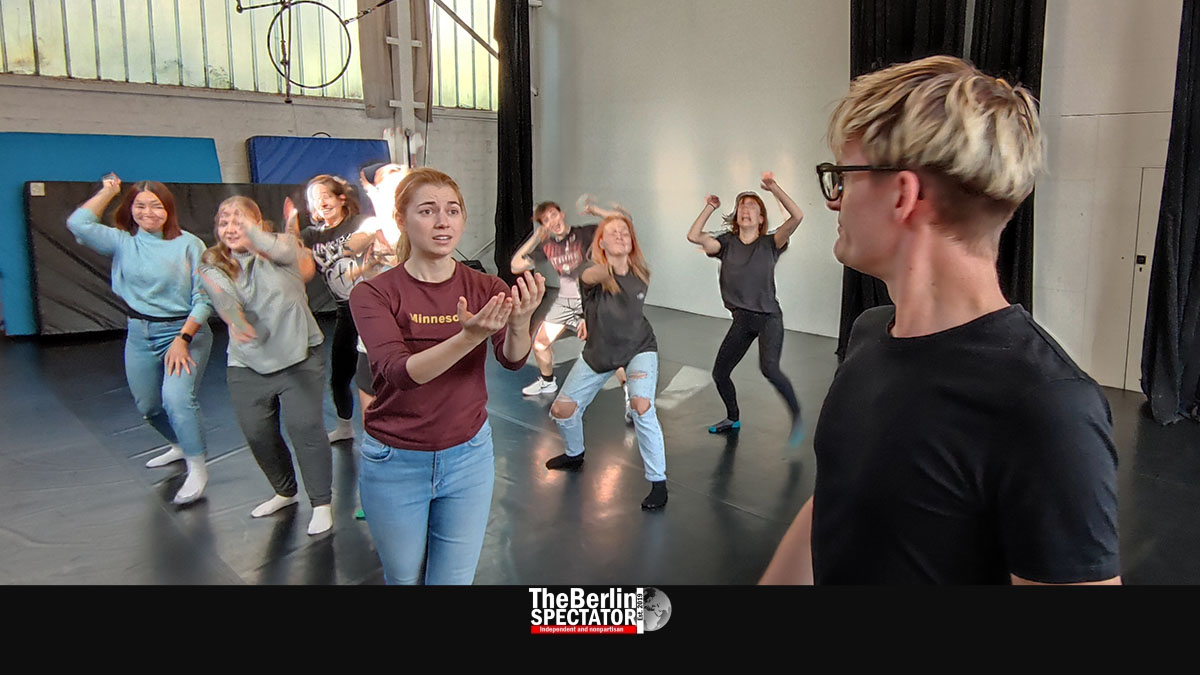 “Legally Blonde” is about to be shown in Berlin. The actresses and actors involved are expats from six countries and Germans. A total of five performances are scheduled to take place at Theater 28. Some tickets are still available.

Berlin, October 11th, 2022 (The Berlin Spectator) — In the summer of 2001, “Legally Blonde”, a Hollywood film, hit theaters in the United States and the rest of the world. This comedy became a cult movie. None other than Reese Witherspoon was convincing as Elle, the main character, in a story that entertained and inspired millions. It made made them laugh too.

The plot? Elle and her boyfriend Warner go to an elegant restaurant. She expects him to propose, but he breaks up with her because he does not believe she is the right companion or partner for the kind of lawyer he wants to be. So, he goes to study at Harvard Law School without her. But Elle does not give up. She shows up in Harvard as well, with an excellent admission test, to impress him.

Obviously, the movie was not forgotten. In 2007, it was turned into a musical that premiered on Broadway. For three years, it was also performed in London. Now, finally, “Legally Blonde” is coming to Berlin. Founded by Lauren Stephens three years ago, the Musical Theater Society Berlin will be presenting it with a very international cast. Twenty-five people from a total of seven countries will be on stage. They include Germans, Britons and Americans, as well as one expat performer each from the Philippines, Russia, Singapore and Slovenia.

Lauren Stephens is the director. At age 5, she hit a stage for the first time. An overdose of rhythmic gymnastics, dance and singing classes did the rest. She also took part in a million musical theater rehearsals. When she moved to Berlin, giving up the dancing, singing and performing was not an option. So, she joined an orchestra and directed a choir for disabled persons. In 2019, she founded the Musical Theater Society Berlin.

In the fall of 2019, just before the Coronavirus killed culture for quite a while, the group did “A Walk Down Broadway”. Later, they performed “Little Shop of Horrors” and “Rent”. In some cases, they did so online. Now, the time for the next show has arrived. The members of the cast for “Legally Blonde” are between 18 and 40 years old. At a rehearsal in Pankow The Berlin Spectator was allowed to visit earlier this week, it was obvious they were having a lot of fun performing together. Izzy Rousmaniere does an excellent job playing Elle. All of her colleagues are great too.

“Legally Blonde” will be on stage at Theater 28 in Berlin’s at Prinzenallee 33. Five shows were scheduled. The first one will take place on Friday, October 28th, 2022, at 7:30 p.m. CEDT, but it already is sold out. On both Saturday and Sunday, October 29th and 30th, the expat performers will be on stage twice, at 2:30 p.m. and 7:30 p.m.. For those of us who want to see an international bunch of enthusiastic performers present “Legally Blonde” with its intriguing and funny story as well as all the music, this is the show to go to. Tickets are available here.