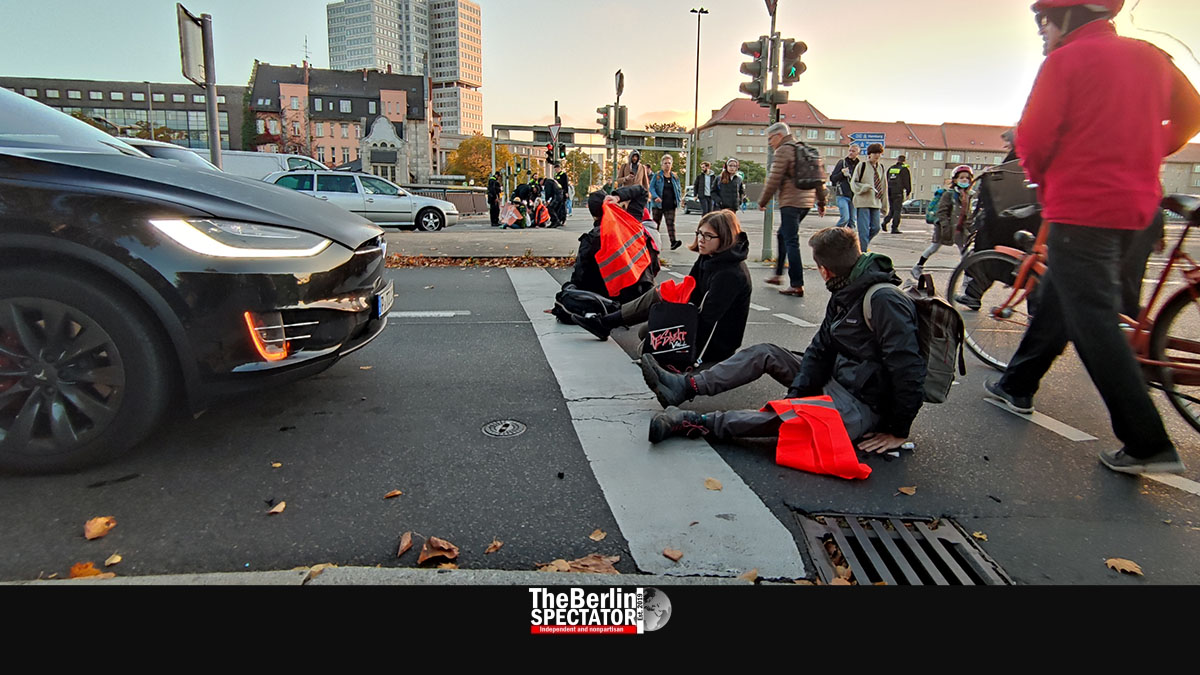 Radical environmentalists are back on the streets of Berlin. Today, they blocked four Autobahn exists in the Wilmersdorf borough. Some pedestrians expressed understanding for the protest. Most affected motorists did not.

Berlin, October 11th, 2022 (The Berlin Spectator) — Last Generation is active again these days. On Monday, the radical environmentalists managed to trigger a fire alarm at the Bundestag, and they blocked freeway exists. Early this morning, they did so again. This time, they concentrated on Wilmersdorf. Last Generation claims the German government was not doing enough against climate change. They say the world was running out of time, and therefore blocking the traffic was justified. Critics, on the other hand, are annoyed. Many motorists were furious this morning.

Note: This time, our reporter wrote a feature on this subject for our affiliate Exberliner. You can find it here. Over here, on The Berlin Spectator, we decided to publish a timeline of the events in Wilmersdorf this morning:

It is still pretty cold in Berlin. But the sun is visible. So is the increasing traffic on the A100, one of Berlin’s city freeways. Trucks are on the move for deliveries. People do not use their cars for joyrides this early, but to go to work, to return home from night shifts, to take kids to kindergartens and schools. At the intersection of the A100 and Hohenzollerndamm, eight cops in a police van are on the lookout for more Autobahn blockades which had been announced by Last Generation.

A few police officers warm up by drinking coffee behind their van, located on the bridge that crosses the freeway. While they are talking, they miss the beginning of the next blockade across the street. Activists sit down on the street. Two Autobahn exists are now blocked. Once they finally notice, the cops react by crossing the street and confronting Last Generation.

Judith, one of the activists who is glued to the asphalt, defends Last Generation’s approach by telling The Berlin Spectator the government was not doing enough. Therefore, it was necessary to trigger a debate in Germany’s society. She and her colleagues are holding signs on which they demand a 100 km/h speed limit on the Autobahn and a successor for the 9 Euro Ticket.

By now, the police have closed the exists the environmentalists are blocking, meaning they managed to keep the traffic flowing on the A100 freeway itself. But hundreds are stuck in the traffic jam caused by the protesters.

An angry motorist walks up to the activists, six of whom are still glued to the asphalt. He says the demonstration was “shit”.

An Italian expatriate who is on his way to bring his daughter to the kindergarten says he does understand why there are protests for more action against climate change. But, to him, blocking everyone is “disrespectful and arrogant”.

For quite a while, one of the dozens of cops on site has been working on detaching Judith’s right hand from the asphalt. The Berlin police Department now is experienced with glue. They use salad oil and little paint brushes to dissolve it. It takes ages.

There is a gathering of about 12 motorists who are stuck in traffic, thanks to Last Generation, at the intersection the activists are blocking. Some of them discuss the situation, but one of them keeps on walking up to the protesters. He tells them they had “no clue”. Some protesters try to get into a proper discussion with him, but fail.

Almost an hour after this blockade commenced, part of the Autobahn exit on Hohenzollerndamm is being opened. But, at first, only one lane can be used. It was easier to clear it because two of the protesters were not glued to the street. Their intention was to have an emergency lane for ambulances. It is now being used to clear this morning’s mess, bit by bit.

Our reporter’s full feature on this morning’s protest can be found on our affiliate Exberliner’s website. Note: Our dear friends over there ‘Britishized’ the piece.