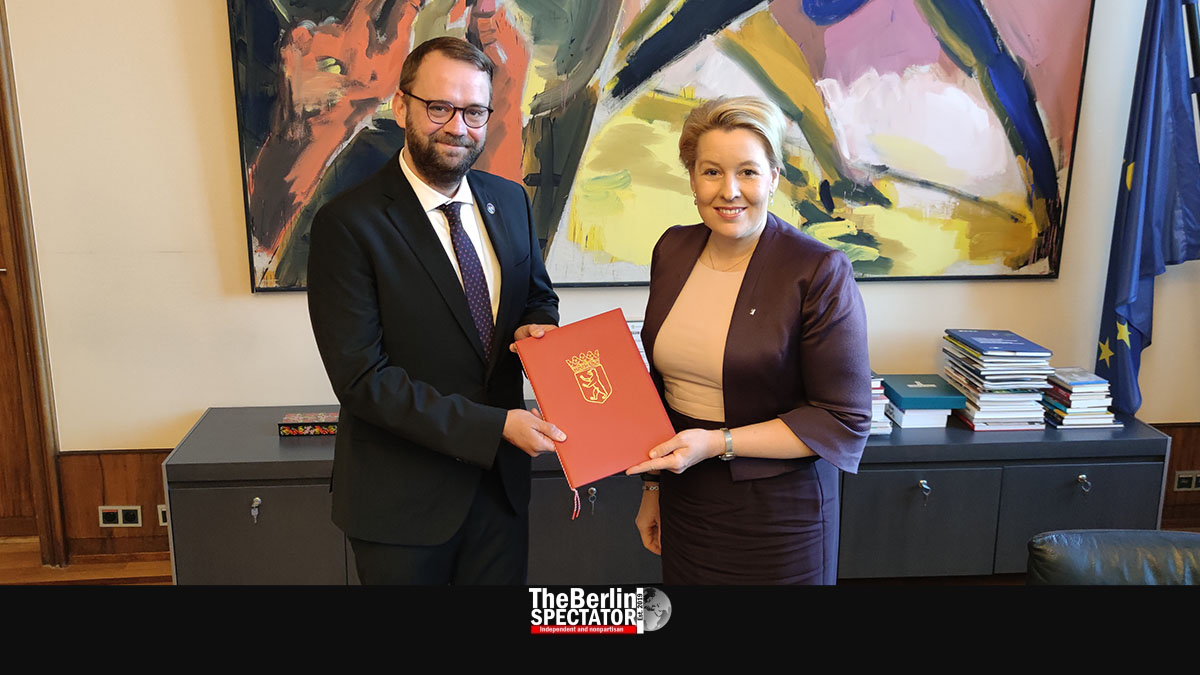 At Red City Hall, Berlin’s Governing Mayor Franziska Giffey signed a declaration entitled ‘Mayors United Against Antisemitism’ today, in the presence of the American Jewish Committee’s Remko Leemhuis. The document says that antisemitism is an assault on the core values of democratic societies.

Berlin, October 12th, 2022 (The Berlin Spectator) — Early this morning, Remko Leemhuis, the Director of the American Jewish Committee (AJC) Berlin, appeared at Red City Hall. This was where Governing Mayor Franziska Giffey signed the ‘Mayors United Against Antisemitism’ declaration. It is an initiative the AJC started in the United States of America in 2015.

Back then, mayors all over the U.S. issued a call to action to combat antisemitism in Europe. This was when their colleagues on the other side of the Atlantic Ocean started signing the declaration. Seven years later, today, Berlin became part of it too. “We, the undersigned Mayors, express our deep conviction that antisemitism is not only an attack on Jews, but an assault on the core values of any democratic and pluralistic society”, the document says.

“In a world of global communications, where antisemitic ideas spread rapidly, a concerted and principled response is required to raise awareness, to educate, and to ensure decency prevails”, the declaration continues. “As Mayors and municipal leaders, we have a unique responsibility to speak out against the growing menace of antisemitism […].” The mayors condemn “antisemitism in all its forms, including hatred and prejudice directed toward Jews, stereotypes or conspiracy theories about Jews, Holocaust denial or distortion, and denying the Jewish people’s right to self-determination and/or the Jewish state’s right to exist.”

In addition, the signatories “support national, state, and local government efforts directed at eradicating antisemitism and preventing extremist indoctrination and recruitment.” They “reject the notion that opinions about the policies, actions, or existence of the State of Israel can ever justify or excuse antisemitic acts.” They also “recognize the ever-present need to be vigilant about efforts to prevent and report acts of antisemitism and other hate crimes”, and affirm “that a climate of mutual understanding and respect among all citizens is the bedrock of pluralistic communities.” Respectful coexistence is an important term here.

“Supporting this initiative is self-evident to me”, Franziska Giffey stated today. “We counteract antisemitism, racism, homophobia and xenophobia in this city. This is part of learning the lessons of the past, especially in Berlin. This declaration also is an important signal to a society that vigorously opposes antisemitism.”

For the AJC, Remko Leemhuis told The Berlin Spectator, cities were important stakeholders in the fight against antisemitism. “The work against antisemitism mainly has to take place in the cities”, he stated. In the United States, more than 700 mayors in all 50 states, from Alabama to Wyoming, have signed the declaration. In Germany, 79 mayors are among the signatories so far.

Berlin: Will the Mask Return to Supermarkets and Public Buildings?