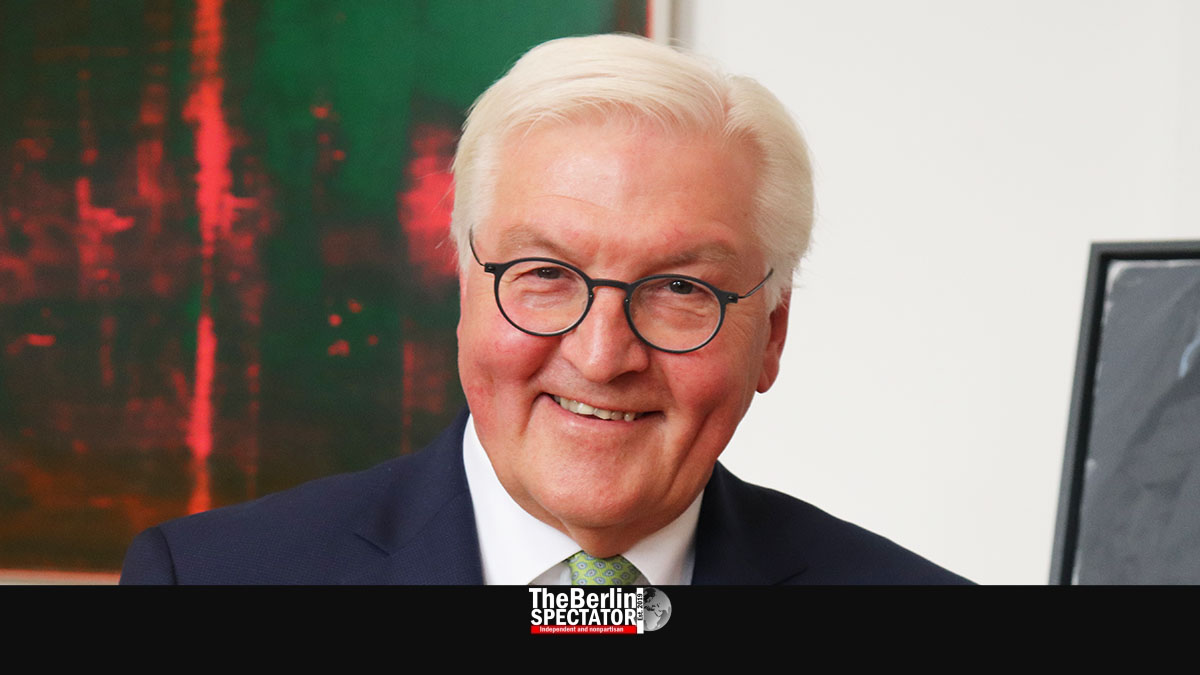 Frank-Walter Steinmeier is about to embark on a big trip to Asia. Once he returns from Tokyo and Soul, he will have to pack his suitcase yet again, before he heads to New York. Today, a new portrait of him was unveiled at the Berlin House of Representatives.

Berlin, October 14th, 2022 (The Berlin Spectator) — With his wife Elke Büdenbender, President Frank-Walter Steinmeier is scheduled to head to Japan and South Korea on October 31st, 2022. In Tokyo, he will meet Emperor Naruhito. Political talks will be taking place as well, with Prime Minister Fumio Kishida and members of Japan’s parliament.

Steinmeier’s schedule for Tokyo is tight. It includes a roundtable with both German and Japanese industry experts. It will be about challenges in the global security and economy policy. In addition, Germany’s President is supposed to meet young Japanese citizens in order to discuss the significance of volunteerism in societies. Yet another meeting was scheduled with film business representatives.

From Tokyo, Steinmeier will be heading to Kyoto. He will definitely be working overtime, by discussing the climate crisis with students, a quarter century after the Kyoto Conference. German and Japanese creative artists make up the next group of people he will talk to, before he visits a factory that consumes energy from regenerative sources only.

Then, a flight to South Korea is the next event on the schedule. In Seoul, Frank-Walter Steinmeier will be meeting his colleague Yoon Suk-yeol. The threat posed by North Korea’s regime and its frequent missile tests will most likely be on the agenda, along with Russia’s war of aggression in Ukraine and the bilateral cooperation. Appointments with German and Korean industry representatives are supposed to follow, as well as talks about challenges aging societies face. In Busan, Steinmeier will be holding talks about the globalization and the climate crisis. Visits to the only cemetery for U.N. Bluehelmets and the new container port are part of the visit too.

A bit later, on November 16th, Frank-Walter Steinmeier is supposed to be on the plane again. This time, he will be heading to New York where he will be awarded the Henry Kissinger Prize. Kissinger himself will be holding a speech before former Secretary of State Condolezza Rice commences the laudatory speech. Steinmeier is not the first German politician to receive the Henry A. Kissinger Prize. Before him, one of his predecessors, the late Richard von Weizsäcker, received it. So did the former Chancellors Helmut Schmidt, Helmut Kohl and Angela Merkel.

Let’s return to Berlin: At the city state’s House of Representatives, a portrait of Frank-Walter Steinmeier was unveiled today. A year ago, he became Berlin’s 116th Honorary Citizen. All persons on the list, most of whom are deceased, get a portrait. As his painter, Steinmeier chose a prominent figure by the name of Armin Müller-Stahl. The 91-year-old multi talent is even more famous as an actor than he is as a painter.

Steinmeier thanked everyone and said he was very attached to Berlin since he had moved here in 1999. Of course, this city was confronted with many challenges. It was not shiny or perfect, but definitely not boring. Berlin was not cold, but cool and likable, the President stated. It also was an adventure, sometimes even a little too much. He was referring to election day a year ago, which will probably have to be repeated because of substantial issues.

More photos of the portrait unveiling ceremony can be found on The Berlin Spectator’s Facebook page.