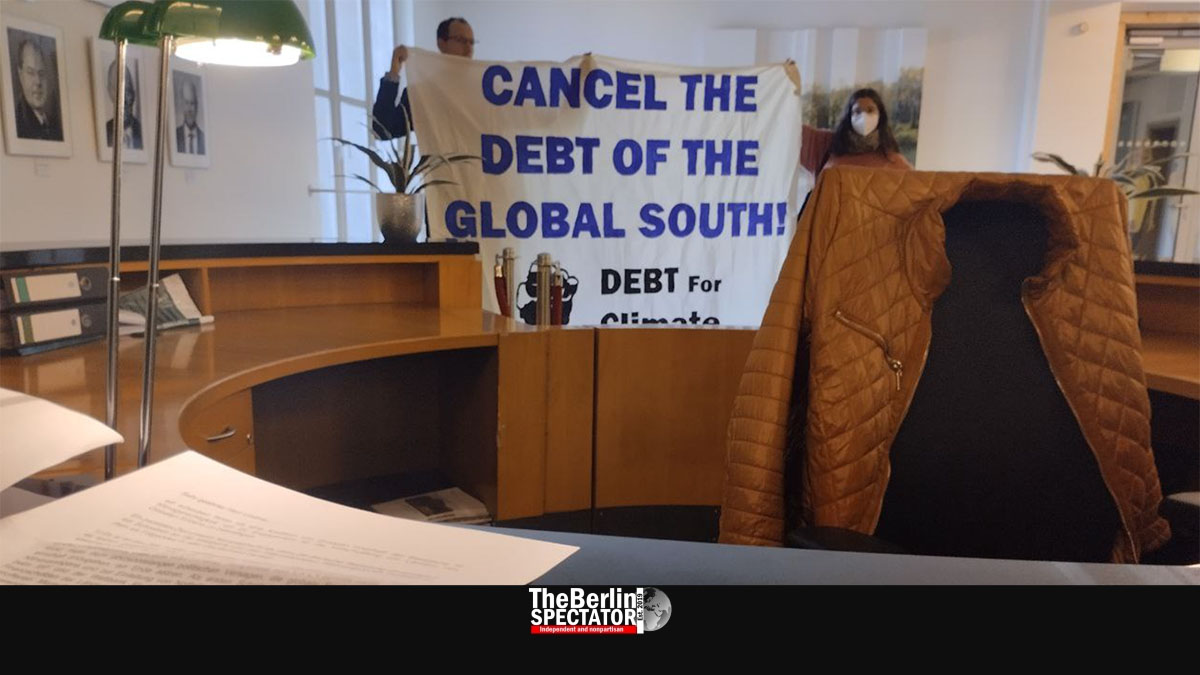 Protesters who are part of several groups managed to enter the German Finance Ministry in Berlin on Monday. They hung up signs and glued themselves to furniture. Some participants spoke to Finance Minister Christian Lindner.

Berlin, October 17th, 2022 (The Berlin Spectator) — Members of three groups known as Last Generation, Scientist Rebellion and Debt for Climate staged several protests today. Some activists entered Germany’s Ministry of Finance with banners on which they accused Finance Minister Christian Lindner of an “empty promise” in regard to debt cancellation.

“Dear Christian Lindner”, Debt for Climate said on Twitter. “We know that you are in the building, you just passed our activists. We are here to talk to you about what you promised to do: debt cancellation for the Global South.” The protesters told him to meet them “outside” for a discussion.

The same group posted photos. They showed its members inside the Ministry. Some of them had glued their hands to windows, elegant counters, desks and other furniture. Others held big signs. “Cancel the debt of the global south!” one of the banners read. “Global south’s illegitimate debt = continuation of colonialism”, another one said. Similar banners were hung up outside the Ministry. Videos were also posted on social media by members of the groups involved. In one of those, participants shouted “What do we want? Climate justice!”.

Minister Lindner replied on Twitter, by saying he had recently held talks in Washington on the debt of African states. “We are on the case”, he said. Lindner added he had not needed the protest [to be reminded of the issue]. According to the Ministry, he also spoke to some protesters directly.

It was unclear whether security in Ministries and other buildings in Berlin will be tightened after today’s demonstrations. The protesters who entered the Finance Ministry today may have caused some damage with their glue, but they were peaceful in the sense that they refrained from resorting to violence. But, the authorities know that less peaceful individuals could enter the building as well, if nothing changes.

Other members of Last Generation blocked several Autobahn exits again today, in Berlin’s Tempelhof and Charlottenburg boroughs. This has been going on for weeks. Again, they glued themselves to the street and caused traffic jams. In the past days, the radical protesters also triggered false fire alarms in public buildings.