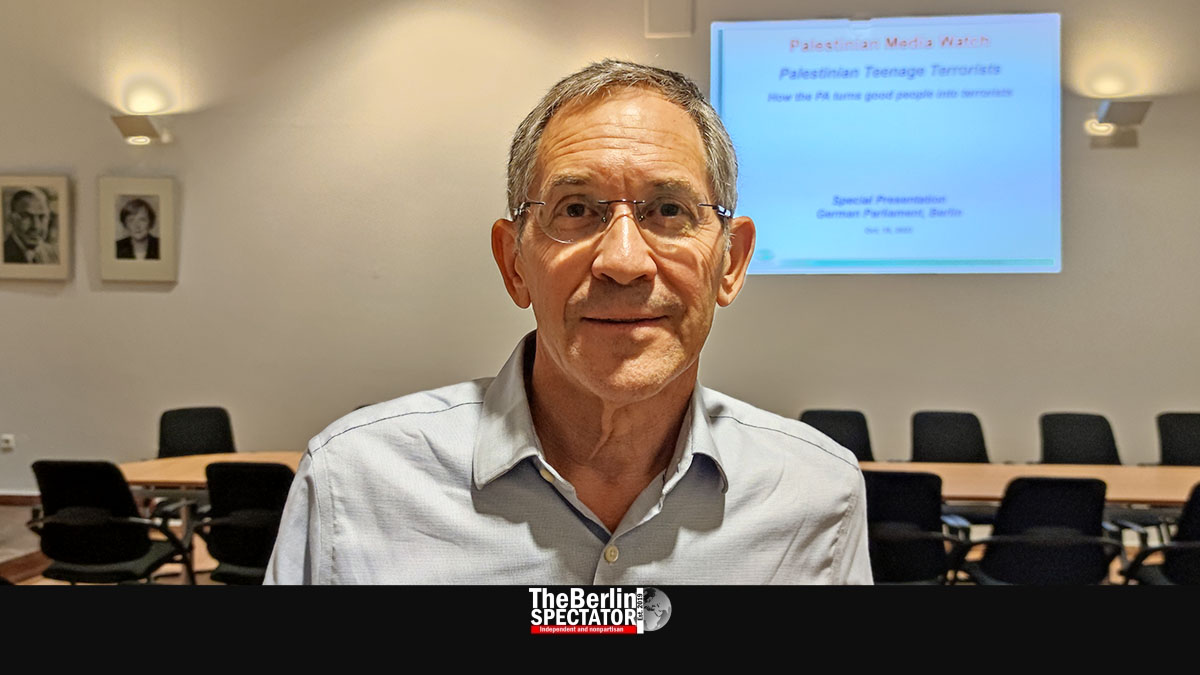 In Berlin, Itamar Marcus, the Director of the NGO Palestinian Media Watch, held a speech about the victimization of Palestinian children by the Palestinian Authority last night. Today, he was going to speak to MPs at the Bundestag. His message: Do not fund antisemitism or terrorism.

Berlin, October 19th, 2022 (The Berlin Spectator) — When you monitor Palestinian media for 26 years, you will get an idea of the kind of incitement to violence they spread. Itamar Marcus, a former New Yorker who lives in the Judean Mountains, was an expert on the matter even before he founded Palestinian Media Watch (PMW) in 1996. His organization documents the content of broadcasts Palestinian Arabs, and in particular their children, are being confronted with. Schoolbooks are another subject they look into.

PMW informs the Israeli government and the public about the indoctrination the Palestinian Authority uses its media for. Itamar Marcus and his European colleague Mette Johanne Follestad also travel to European and other capitals, where they hold talks with government representatives and MPs. At an event organized by the German-Israeli Association (DIG) and Mideast Freedom Forum Berlin (MFFB) on Tuesday night in Berlin, Marcus shared many shocking instances of Jew hatred and incitement to murder broadcast on Palestinian television and other media.

He did not get into the terror organization Hamas which controls Gaza, because nobody is surprised about the hatred it spreads. Itamar Marcus concentrated on Fatah and the Palestinian Authority which gets a lot of funding from the European Union, including Germany. “The demonization of Jews comes from the top”, Marcus explained. On its official website, Mahmoud Abbas’s Fatah says the Jews led “the project to enslave humanity” and they had “allied with the Nazis to accumulate wealth”. Fatah also makes people believe Jews were hated “because of their racism and filthy behavior”. Obviously, this is not really criticism of Israel’s policies or the country as a whole, but outright Jew hatred.

All of this is only the tip of the iceberg. It may be hard to believe, but it actually gets even worse. What is worse than spreading unacceptable, appalling conspiracy theories about Jews? Inciting children is, making them want to murder Jews as “martyrs”, and brainwashing even the youngest kids on television at schools and at summer camps. The recent examples Itamar Marcus showed would be unbelievable if there had not been scandals in regard to the content of Palestinian schoolbooks before.

When Saed Erziqat, the head of the Palestinian Authority’s Teacher’s Union that represents 60,000 teachers, says Nazism and Zionism were “two sides of the same coin”, something is very wrong. The same applies when Abbas’s TV channel depicts Israel as a mean-looking snake that is about to eat Palestinians, when Fatah’s ‘Children’s Magazine’ says its goal was to “liberate Palestine from the thieving Zionist entity”, when Dr. Muhammad Shbair, a ‘law professor’ at Al-Azhar University says on Palestinian TV international law permitted terror, but prohibited Israel from killing terrorists during attacks, or when the same channel invites an imam who says this: “Allah, delight us with the extermination of the evil Jews”.

On top of it all, the PA is giving children AK-47 assault rifles at summer camps and makes them pose in front of photos of Mahmoud Abbas and the late Yassir Arafat. All the brainwashing is making Palestinian kids want to be “martyrs”, meaning murderers, as Itamar Marcus showed in Berlin, by presenting numerous instances of this kind of incitement and its deadly consequences.

Itamar Marcus has a message to European governments, including the one in Berlin: “If you had stopped funding the Palestinian Authority’s incitement the first time I came here 15 to 20 years ago, we would not have this situation in which there is an entire generation of Palestinian children who have been brainwashed.” Marcus says today’s Arab children in the Palestinian areas were “so much more hateful” than they had been 20 years ago, meaning the problem is deteriorating. “How are good people being turned into terrorists?” is the question Itamar Marcus has answers to. He wants Germany and other countries to put the PA under pressure by listing conditions for the millions of Euro that are being wire-transferred to its accounts every year.

According to Marcus and his organization PMW, Palestinian children are “victimized by the PA through abusive messages.” He says they were “indoctrinated to hate Israelis through many antisemitic messages and conspiracy theories, to legitimize murder, and to seek martyrdom as an ideal.” How is this generation supposed to recognize Israel as a state, stop the terror, return to the negotiating table and work for peace? The indoctrination and incitement will have to end first. But this will not happen if no pressure is applied.

Note: Even though they have very similar names, Itamar Marcus and The Berlin Spectator’s Imanuel Marcus are not related.

Berlin: Decision on Compulsory Mask Rule Postponed by a Week