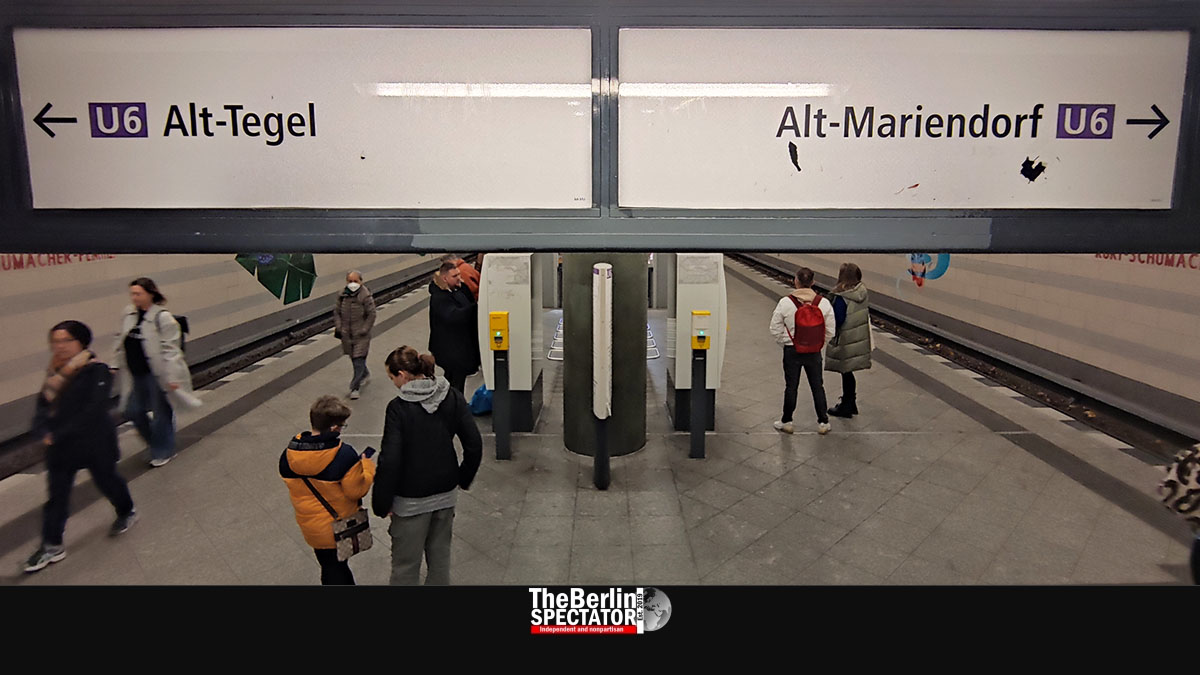 Berlin’s public transport provider BVG is about to start a big renovation project. On the U6, the tracks between Kurt Schumacher Platz and Alt-Tegel will be removed completely and rebuilt. For two and a half years, five stations will not be in service.

Berlin, October 21st, 2022 (The Berlin Spectator) — In the northwestern part of Berlin, tens of thousands of passengers will be affected by a rather big refurbishment project. The German capital’s ‘U-Bahn’ (subway, metro, underground, tube) is the backbone of its public transport system, and the U6 line is an important part. But one big chunk of this line will be shut down completely on November 7th, 2022.

According to the BVG, the entire stretch from Kurt Schumacher Platz to Alt-Tegel has to be removed and rebuilt from scratch. This is about a railroad embankment with a length of 2.3 kilometers (1.4 miles) and 6.5 kilometers (4 miles) of tracks with eight switches. In addition, truckloads of devices and cables need to be trashed and reinstalled and as many as eight bridges will be renovated. One bridge is supposed to be demolished and rebuilt.

It is safe to say that there is a lot of work to do. The stretch they will be refurbishing was part of West Berlin’s public transport when it was inaugurated 65 years ago. At that time, the Berlin Wall was not standing yet. In other words: Those train tracks are old, which is why 12,000 metric tons of gravel have to be moved away, recycled and returned. Five hundred tons of steel are needed for the new bridge. There is more: Some 8,500 concrete ties have to disappear and be replaced. Let’s not even mention the 69 signalboxes and four stations that need to be refurbished.

Obviously, the endeavor costs money. At this point, they expect the price tag to read 90 million Euro (88.1 million U.S. Dollars or 78.3 million Pounds Sterling). Besides, this is not America or China, but Germany, meaning construction projects of this kind tend to take time and cost more than expected.

In 1923, the U6 was inaugurated. Today, it connects Tegel in the northwest of Berlin and Mariendorf in the south to the city center. After the war, in 1958, the stretch that will be rebuilt now was inaugurated. It was the first newly built ‘U-Bahn’ stretch after World War II.

For the next two and a half years, countless buses will be in service as replacement transport. In order to make sure they actually get through the rather bad traffic up there, they will have their own lanes. Obviously, this means there will be one lane less for the other motorized traffic. It might take a lot longer to get through around Eichborndamm, An Der Mühle and Kurt Schumacher Damm. The latter traffic artery was a mess today, even though the construction has not even commenced yet. ‘Jelbi Points’ are supposed to be set up too. Here, people can rent scooters and bikes. Everyone will need to get home, to work or to school somehow.

The big renovation is absolutely necessary. On some stretches, including north of Scharnweberstrasse, the trains move very slowly because the tracks they are on are falling apart.