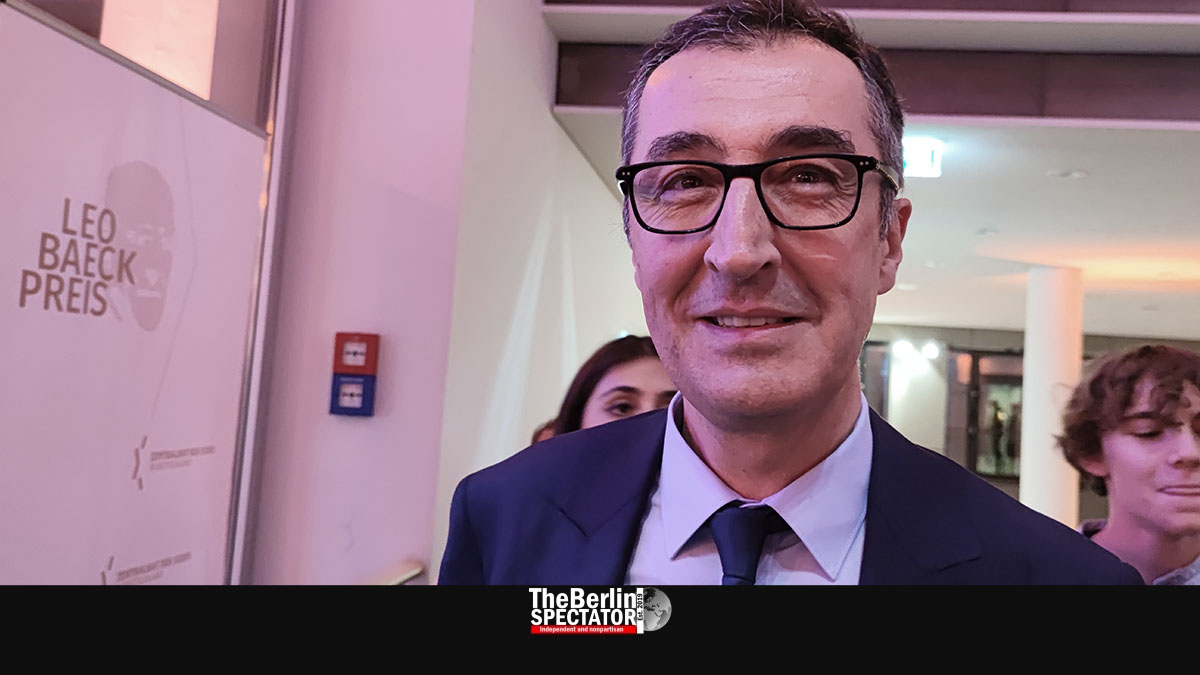 The Leo Beck Prize is awarded to persons who make outstanding contributions to Germany’s Jewish community. Agriculture Minister Cem Özedmir is the first recipient of Muslim origin, and an important voice against hatred of all kinds, including antisemitism.

Berlin, October 21st, 2022 (The Berlin Spectator) — Former Presidents, such as the late Richard von Weizsäcker, former Chancellor Angela Merkel and other non-Jewish personalities have received the Leo Beck Prize. Last time, in 2019, Mathias Döpfner, the CEO of the publishing house Axel Springer SE, was honored with the prize named after the late scholar and rabbi Leo Beck. Last night, it was awarded to the Green politician Cem Özdemir from Bad Urach in the federal state of Baden-Württemberg who became Agriculture Minister last year.

The Central Council of Jews in Germany invited 300 guests to the award ceremony at ‘dbb Forum’ in Berlin’s Mitte district. Margot Friedländer, a Holocaust survivor who moved back to Berlin in 2010, at age 89, after having lived in the United States of America for 64 years, was there. So were Israel’s new Ambassador to Germany, Ron Prosor, former recipients of the Leo Beck Prize, MPs, and members of Germany’s small Jewish community.

Cem Özedmir was discriminated when he was a child because of his origin. Much later, he became one of the first German MPs with Turkish parents. As a politician, he has always stood up for freedom, democracy, equality and fought hatred and prejudice. Recently, he even clashed with the Turkish President Recep Tayyip Erdoğan and other officials from Ankara. And he does not mince his words when he talks about Germany’s extremist far-right party AfD.

“Cem Özedmir is a Green politician, a liberal, a constitutional patriot”, the Council’s President Josef Schuster stated. “He is a defender of Israel, a vehement opponent of fanaticism, marginalization and antisemitism as well as a proponent of freedom of religion, and therefore a dignified recipient of the Leo Beck Prize”, Schuster told his organization’s guests in Berlin. The Jewish community in Germany was very much indebted to him, he said.

Ronya Othmann, the laudator, said Cem Özdemir had made the fight against antisemitism his own matter, which was something everyone needed to do. He had found the right words in many instances. Mrs. Othmann, who writes famous columns for newspapers, added Özdemir always showed dignity and respect.

The recipient himself held an impressive speech in which he said wherever there was rampant antisemitism the constitution was attacked as well, along with everything a modern, liberal-minded Germany stood for. Therefore a defensive fight for a liberal democracy always was a fight against Jew hatred as well.

Germany’s Central Council of Jews was founded 72 years ago. It represents the country’s 105 Jewish congregations and runs several projects against prejudice and hatred. They include ‘Shalom Aleikum’, a series of meetings between Jews and Muslims with the same professions, and ‘Meet a Jew’, a program that sends young Jews to schools, where they talk to kids many of whom have not met Jews before. That way, they notice Jews their age may have similar interests and are not very different from themselves.