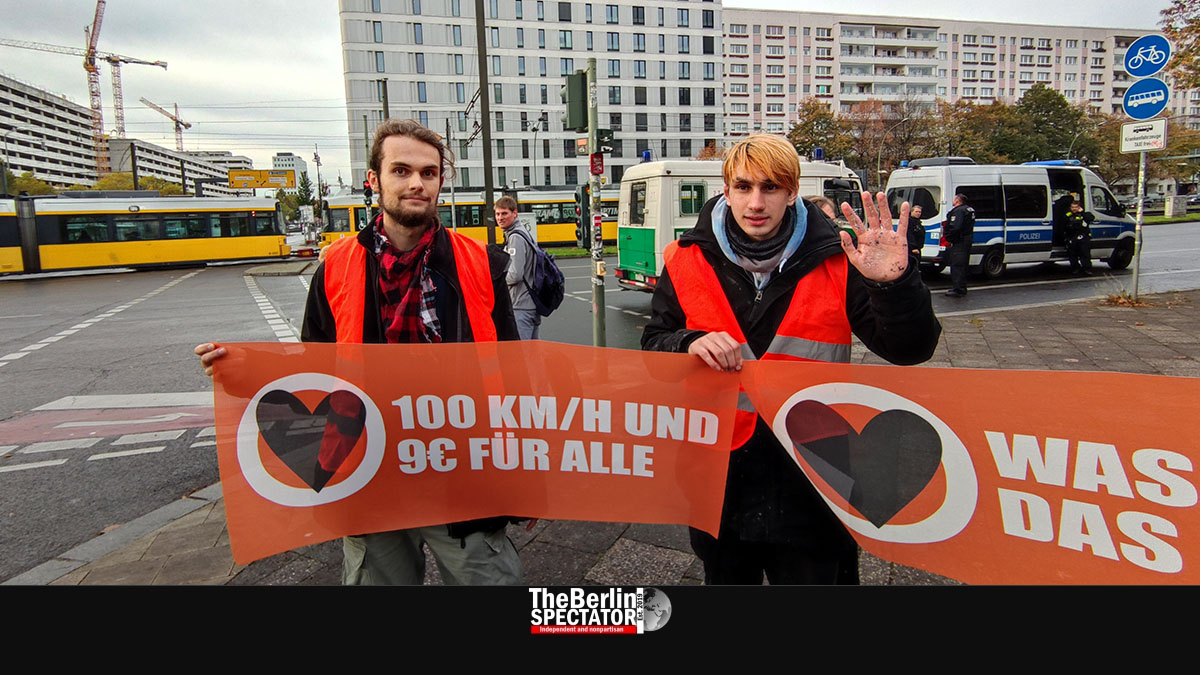 Members of ‘Last Generation’ keep on blocking the traffic in Berlin. With protests of this kind, they may be getting the attention they want, but they are not reaching their political goals. In the capital, the reactions to their activities vary. There is both support and rage.

Berlin, October 25th, 2022 (The Berlin Spectator) — On Monday, the intersection of Otto Braun Strasse and Mollstrasse was a mess. Just north of Alexanderplatz, a major square in Berlin’s eastern city center, motorists did not get through in the late morning. Again, members of ‘Last Generation’ had glued themselves to the street. They know it takes the police a long time to detach their hands from the asphalt, and they know their protest will be covered by the many media represented in Berlin, including this small publication.

The activists involved in this blockade, one of several in the German capital this morning, know Berlin’s motorists do not like them and that they have to expect aggressive reactions. They also know they are punishing residents who are trying to get to work or who need to pick up their children, but insist this was necessary to change things. Their justification: Nonviolent resistance was the only way to make the government take the “right” approach, from their point of view.

It was obvious these young men and women at the big intersection were enjoying the attention. So far, none of their demands have been fulfilled by the government. They told The Berlin Spectator they would just keep on going until this was the case. Today’s protests were only the beginning. If this is the beginning, what does Berlin have to expect?

Some 39 kilometers (24) southwest, at Museum Barberini in Potsdam, other ‘Last Generation’ members chose a form of protest that got even more attention. They threw an extra large portion of mashed potatoes at a painting by none other than Claude Monet, one that is indispensable and worth millions. As a result, the museum shut down for the rest of the week. Security is supposed to be stepped up after this attack.

In Berlin, there are many who understand or even support ‘Last Generation’s approach. “At least they are doing something to bring the climate crisis back into the focus”, is a reaction The Berlin Spectator’s editor has heard more than once. Christopher Förster, a member of the Berlin House of Representatives for the conservative CDU, has a very different perspective. He said he believed ‘Last Generation’ was an organization the purpose of which was committing crimes. Party colleagues of his even demanded a ban.

This kind of criticism is being voiced by more progressive politicians too. Last week, Berlin’s Interior Senator Iris Spranger of the center-left SPD told the RBB radio and TV network, a group that obstructed ambulances or triggered false alarms (which ‘Last Generation’ recently did) was gambling with lives.

Some of the group’s demands seem legit, including a general speed limit of 100 km/h (62 mph) on the German Autobahn. According to polls, about half of all Germans believe it is about time to have a speed limit. But who decides about this kind of policy? A government and the Bundestag, both of which were democratically elected, or a bunch of young activists who glue themselves to streets and throw mashed potatoes at valuable paintings? Do they even respect democracy?

Apart from the form of protest ‘Last Generation’ chose, the organization’s written material shows how radical it actually is. On its website, it accuses the German government of having brought the country “to the brink of the abyss”. The group says it would not tolerate this “crime against humanity” without resistance. In the past years, radical right-wingers have accused the (democratically elected) government of committing crimes as well, including Corona deniers and xenophobic immigration opponents. The big difference is that ‘Last Generation’s demands make a lot more sense. The absence of a general speed limit in Germany is absolutely ridiculous, for a million reasons.