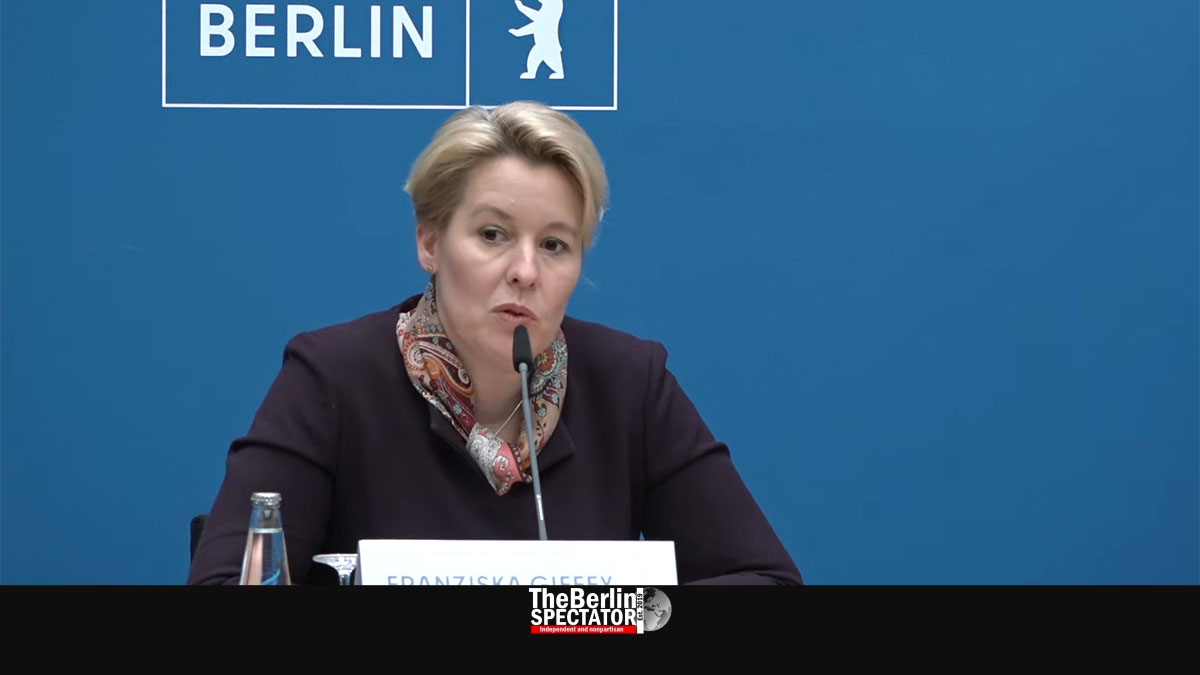 After a Senate meeting on Tuesday, Governing Mayor Franziska Giffey announced masks would not be mandatory in shops or cultural venues until November 24th, 2022. But there is a strong recommendation to wear masks in buildings that are accessible to the public.

Berlin, October 25th, 2022 (The Berlin Spectator) — The Berlin Senate refrained from following a recommendation by Health Senator Ulrike Gote today. She had made clear she wanted a mandatory mask rule in cultural venues, shops and other kinds of public buildings and establishments. Within Franziska Giffey’s government, a big discussion on the matter took place in the past days. The Governing Mayor said the old Corona regulations would be prolonged, but the decision had not been taken lightly.

According to her, the Senate heard three professors employed by the two hospital corporations Charité and Vivantes. Senate members had asked them many questions. But political decisions could not be taken by experts, Mrs. Giffey stated. The Senate had taken several aspects into account before it had come to its conclusion. Depending on the Corona situation, the regulations could change in November.

One single aspect was added to Berlin’s Corona rules: The Senate is strongly recommending the use of medical masks in stores, cultural venues and at similar locations. Mrs. Giffey said it was important that this message reached people who entered retail businesses, museums or other places accessible to everyone. Self-responsibility was an important aspect here.

Masks still are required in public transport, hospitals and care homes. The decision not to require them in shops and concert halls is connected to those taken by all 15 other federal states in the Federal Republic of Germany. Neighboring Brandenburg refrained from requiring masks in supermarkets and cultural establishments as well. Both the government in Potsdam and the Berlin Senate wanted uniformity, in this region and the entire country.

Some other states, including Bavaria and Saarland, had much higher Corona infection numbers, Franziska Giffey said. Still they had decided not to go for mandatory masks. The Governing Mayor also mentioned a new workgroup of health ministers who would work on coming up with limit values that could require stricter Corona regulations in the future. She said the Hospitalization Incidence was a useful number to look at. At this stage, Berlin’s level was 8.18 while Saarland had reached 29.62.

In addition, the Mayor said the connection between mandatory mask rules and the situation in hospitals was not obvious right now. This aspect had been considered too. According to Franziska Giffey, the Senate also discussed a vaccination campaign. Fourth vaccinations were important, especially for persons above 60 years of age.