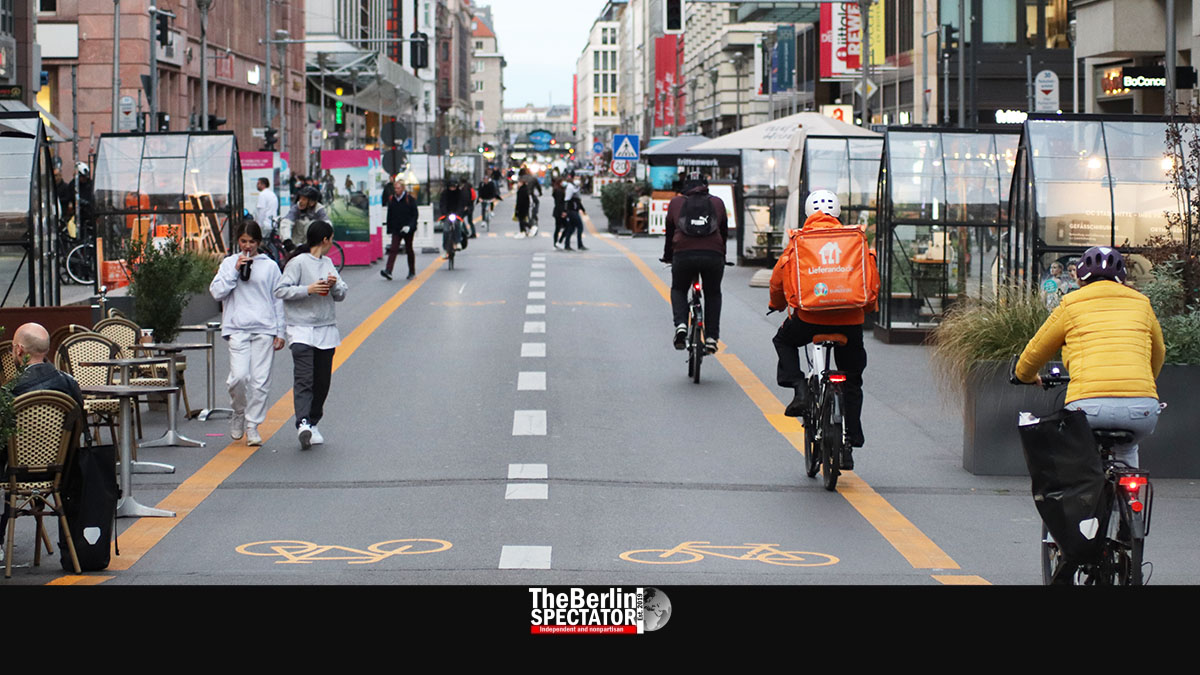 Friedrichstrasse used to be divided by the Berlin Wall. Today, it is supposed to be a major shopping street. In 2020, Berlin tried to turn part of Friedrichstrasse into a “strolling promenade”. The experiment failed. Now, a big argument erupted in the Senate.

Berlin, October 26th, 2022 (The Berlin Spectator) — August 23rd, 2020, was the big day. This was when a stretch of Friedrichstrasse, the one between Französische Strasse and Leipziger Strasse, was supposed to be turned into a “strolling promenade”. But what it really became was a classic example of how not to build pedestrian zones. Countless problems popped up.

First, motorized traffic was banned from the stretch. Then, some big flower tubs and seating accommodations were placed on the street’s grey asphalt. In addition, bike lanes in both directions were painted onto the street in outlines. Let’s not forget all the prohibition signs that were set up. The outcome was neither beautiful nor too useful.

As it turned out, many business owners in the affected area did not agree with the changes. They felt their shops were cut off from the rest of the street. Also, the number of pedestrians who went there to do window shopping or even real shopping did not impress anyone. Thirdly, the pedestrian zone remained ugly and grey, in spite of the flowers and benches.

Some of the few pedestrians who tried to use the “strolling promenade” complained they had almost been run over by those cyclists who race back and forth on that bike line of theirs. They basically turned it into a bike racetrack.

And yes, there is yet another issue. Since this stretch of Friedrichstrasse is blocked to motorized traffic, the latter was forced to go elsewhere, namely to Charlottenstrasse, a parallel street east of Friedrichstrasse. This is where pedestrians inhale more polluted air and hear more traffic noise than before. Business owners are not happy about the traffic mess caused by the pedestrian zone next door.

Berlin’s Mobility and Environment Senator Bettina Jarasch, a member of the Greens, came up with an approach that was supposed to kill two birds with one stone: By making Charlottenstrasse a bicycle street, she wanted to get rid of both the excessive traffic there and the bicycle racetrack on Friedrichstrasse. Splendid.

Except Berlin’s Administrative Court received a complaint by business owners on Friedrichstrasse who wanted to have their street back, the one they had until August 22nd, 2020, with cars and pedestrians. Yesterday, the court ruled the experimental pedestrian zone needs to be removed and motorized traffic has to be permitted to use that stretch again.

The minute the ruling was announced, a public argument between Governing Mayor Franziska Giffey and Senator Bettina Jarasch erupted. Mrs. Giffey said now that there was a ruling it had to be implemented as soon as possible. On RBB TV, the evening news show ‘Abendschau’ managed to organize an interview with Bettina Jarasch who is on vacation somewhere in southern Germany.

She said she was not sure whether Mrs. Giffey had understood what the ruling was about. The court had simply said it had taken too long to apply changes since the pedestrian zone experiment had officially ended. According to Senator Jarasch, the plans for Friedrichstrasse and Charlottenstrasse will be implemented. “I am the one who is responsible for the mobility transition”, she said in the RBB interview. The ‘strolling promenade’ was part of the coalition agreement. “Mrs. Giffey knows”, the Senator stated. The Greens are working on giving pedestrians and cyclists more space and getting rid of some of the cars the streets of Berlin are full of.

Observers are asking themselves whether this argument is part of the election campaign Berlin is expecting, because the city state’s last elections will likely have to be repeated soon, due to irregularities on Super Sunday in September of last year. According to the polls, Bettina Jarasch or one of her Green party colleagues could become Governing Mayor if the Social Democrat (SPD) Franziska Giffey does not manage to turn the tide, like she did last time.

While the argument on the experimental pedestrian zone is going on, another spot on the very same street should be turned into one as soon as possible: Around Checkpoint Charlie, countless tourists cross the street all the time, in order to get to the replica of the wooden hut soldiers used when they guarded the border between the American and Russian sectors of Berlin some decades ago. At the same time, sightseeing buses and passenger cars constantly squeeze through the crowds. The situation there is dangerous and should be improved.