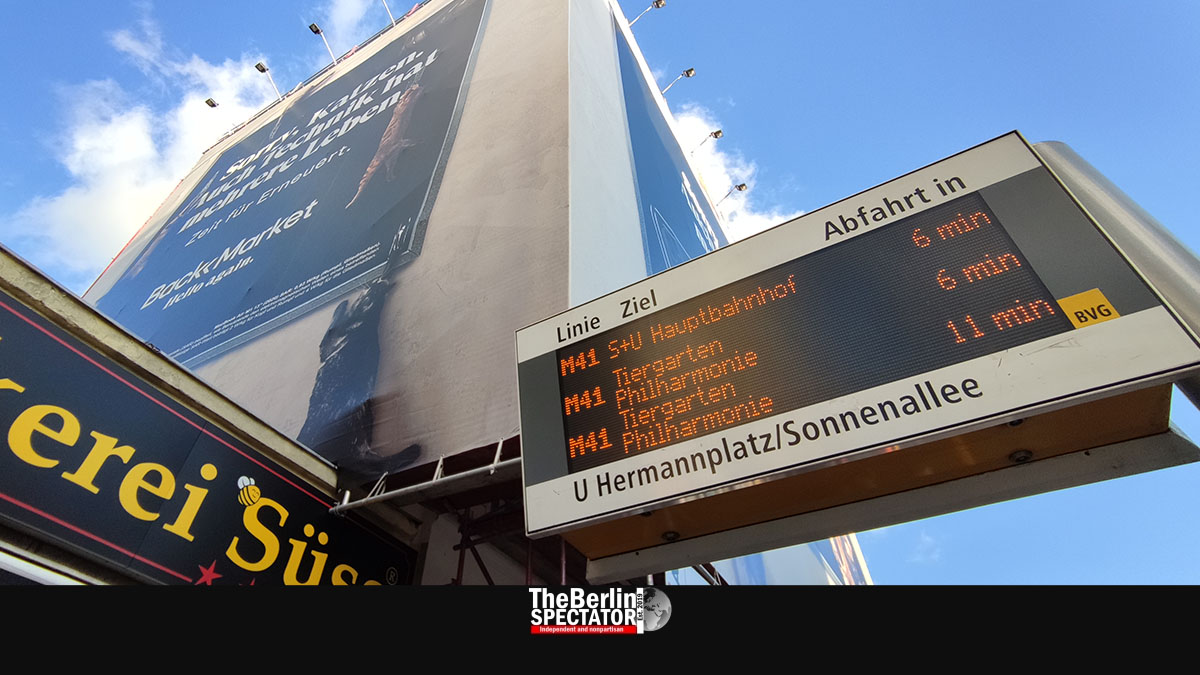 In Berlin’s Neukölln district, the tenants of an apartment block are furious. Their landlord announced renovations. A scaffolding was installed with a giant advertising banner that covers the residents’ windows on three sides of the building.

Berlin, November 5th, 2022 (The Berlin Spectator) — In Sonnenallee no. 7, life is not the same anymore. Six of the seven parties who live there are in the process of teaming up because of a problem. Located a few steps away from Neukölln’s infamous Hermannplatz square, they cannot look out of their windows anymore. Living there almost feels more like being in a cave.

The scaffolding that was installed for renovation work the landlord announced is not the issue. This is about an enormous advertising banner that covers three sides of the building in their entirety. Kornelius Glaser who lives on the top floor with his kid and a his wife said the tenants were in the process of describing the problem in a text they would send to German media.

He spoke to everyone else in the building. Except for an elderly gentleman, everyone was determined to get rid of the banner. Living like this was weird, he explained. In Glaser’s nice apartment, opening the windows does not make much sense anymore because the giant banner does not really let fresh air get in. The sight people used to have, on the lively square, the street and the bus stop, is gone. It is almost like the tenants are cut off from the rest of the city.

Downstairs in the corridor, a message from the landlord was stuck to the wall. It notifies everyone about maintenance work that was necessary. The rent the tenants had to pay was not affected, the letter reads, meaning the owner does not seem to want to lower it. But “restrictions and annoyances” were inevitable. Also, the residents were told to empty their balconies and notify their household insurances about the scaffolding, which might increase the risk for burglaries.

The letter contains a phone number at which the landlord’s son can be reached twice a week, on Tuesdays and Thursdays. But the notice does not include a single word about the big advertising banner that covers most windows. The tenants have open windows in the back, but only their kitchens and bathrooms are located there.

One of the affected residents posted a photo of the covered building on Instagram. “Our evil landlord has covered the entire front side of the apartment building in this advertisement, blocking all natural light and healthy air”, the text next to the photo says. “It’s inhumane and abhorrent! We are banding together as neighbors to try to fight it. We have already contacted the ad company, the ‘Ordnungsamt’ (Office of Public Order), lawyers, tenant’s rights organizations and the landlord himself.” The tenant obviously is angry. “We wake up in the morning and do not even know if the sun is shining outside!”

A follower informed The Berlin Spectator on Friday. Our reporter went their on Saturday afternoon. One of the problems Kornelius Glaser has is the fact that nobody told them how long the renovation will take or how long their vista will be gone.