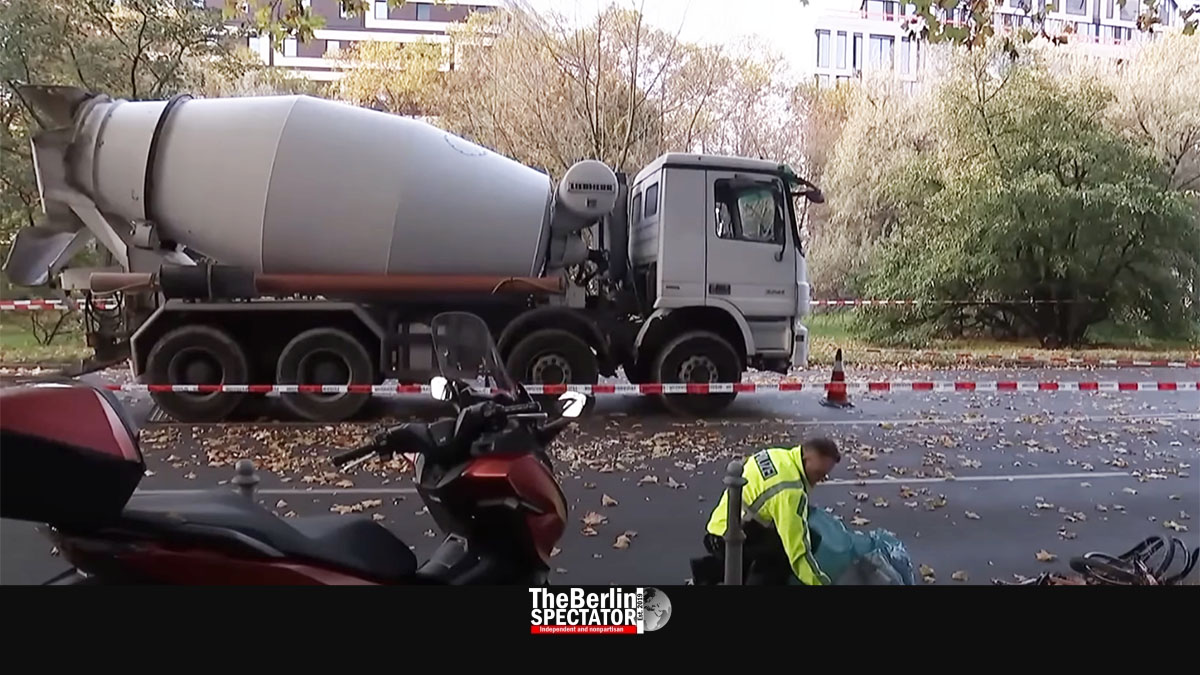 A German government spokesman indirectly criticized Last Generation, a group of activists who keep on blocking the traffic in Berlin. He said when lives were endangered, the limit of legitimate protests had been reached.

Berlin, November 5th, 2022. Update: November 6th, 2022, 5:29 a.m. CET (The Berlin Spectator) — Days after a bad accident occurred in Berlin’s Wilmersdorf borough, the victim of which died on Friday, a spokesperson for the federal government slammed Last Generation without mentioning the group’s name. He said extreme forms of “climate protest” were “not target-aimed” and should not take place beyond the framework of laws.

“Endangering lives is intolerable”, spokesman Wolfgang Büchner said. “And that is why we do not accept this kind of protest.” Climate protection was a pivotal concern for the federal government, he stated. Chancellor Olaf Scholz supported any kind of democratic involvement. Büchner said he did not want to establish a connection between the death of the cyclist and the street blockade on Monday, because there was an ongoing investigation.

The accident victim is a 44-year-old woman who was riding her bicycle on Bundesallee when she was run over by a concrete mixer truck. After the accident, she was stuck under the heavy vehicle. The Berlin Fire Department ordered a special truck that was supposed to lift the concrete mixer to make sure the injured lady could be moved, but the vehicle got stuck in traffic on Berlin’s city freeway. The traffic jam was probably caused by First Generation’s protests.

Some of the protesters had climbed a sign gantry on the motorway, others had been busy blocking freeway exists by glueing themselves to the asphalt. These protests in Berlin have been going on for weeks. More recently, they included Munich as well. Apart from blocking streets, members of the radical group glue themselves to valuable paintings and other exhibits in museums.

Since the special truck was late, the Fire Department chose another way to free the victim. She was taken to a hospital by helicopter. On Thursday, she was declared brain-dead, on Friday, she died. This lady is the eighth cyclist to die on the streets of Berlin this year. Deadly accidents involving trucks, especially so-called right-turn accidents, are common. In this case, the question how exactly it happened is unclear at this stage.

Right after the accident, the truck driver got out of his truck to check on the victim. At that moment, an unknown person appeared and stabbed him with a knife. The police are investigating this incident while looking into the accident itself separately. The culprit was reportedly taken to a psychiatric hospital.

For the Social-Democratic Party (SPD) at the Berlin House of Representatives, Florian Dörstelmann commented on the accident. The events that had occurred on Monday were shocking and hopefully showed the protesters that they could not continue this way. Even before the accident, his party had said the prosecution needed to proceed against these protesters. Now, it was not simply about coercion anymore. The worst case had happened.

Last Generation released a statement which says a “wave of accusations, untruths and incitement” had hit the group since Monday. The media were not following the principles of neutral, fact-based coverage anymore. This applied to both public service broadcasting and private channels. Last Generation rejected the accusations by saying the protesters had been several kilometers from the location of the accident. When members had climbed the sign gantry on the city freeway, the police had decided to close all but one lane. The accident was being instrumentalized by the public.

In the fifth paragraph of its statement, the group said the fact that the cyclist had gotten into the accident was terrible. “We are shocked and in mourning.”

Like other radical organizations, Last Generation, which is situated on the far-left, obviously blames the media for criticizing it. Similar to extremist right-wing groups and conspiracy theorists, it accuses Germany’s democratically elected government of a “crime against humanity”, as it says on its German website.

When the protests started, it was about saving expired food supermarkets throw away. Now, the activists demand a general speed limit on the German Autobahn and a new 9 Euro Ticket for public transport and regional trains.