Berlin’s Friedrichstrasse to Metamorphose Into Regular Street Again, But Not for Long 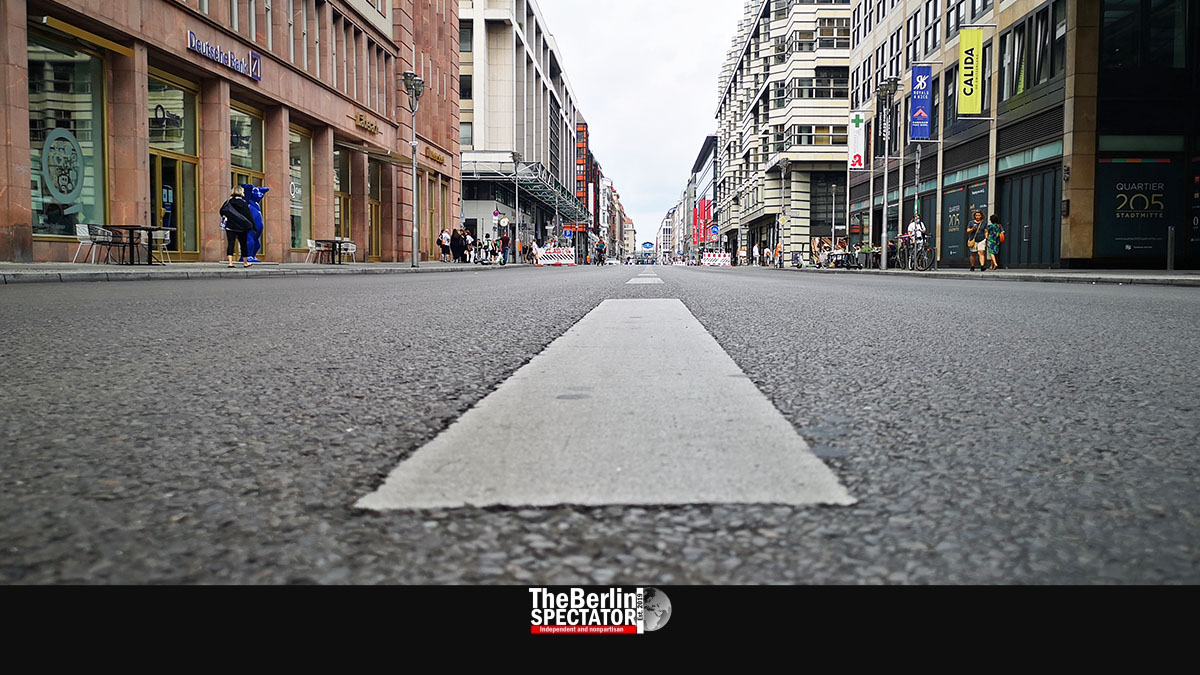 In the summer of 2020, part of Friedrichstrasse in Berlin’s eastern city center, was turned into a pedestrian zone, as an experiment. When the latter was officially over, the street was not turned back into its original state. A court verdict now forces Berlin to let the cars back in, at least for a short while.

Berlin, November 7th, 2022 (The Berlin Spectator) — Friedrichstrasse (German spelling: Friedrichstraße) became a pedestrian zone experiment in August of 2020. A few modern day benches, flower buckets, a painted bike lane in both directions, and dozens of signs and barriers were put all over the place. But several issues surfaced. Today, the Senate said motorized traffic will be allowed back into Friedrichstrasse by November 22nd, 2022.

But, what sounds easy is actually complicated. A few days ago, Governing Mayor Franziska Giffey, a Social Democrat (SPD), and Berlin’s Senator of Mobility and the Environment, the Green politician Bettina Jarasch, started arguing in public. The subject they were fighting about was Friedrichstrasse, and the fact that Berlin’s 2021 state elections need to be repeated soon, did not exactly have a deescalating effect. If the latest polls are accurate, Bettina Jarasch might (or might not) replace Franziska Giffey as Governing Mayor soon.

But let’s get back to Friedrichstrasse: The experiment is supposed to end in two weeks from now, which is what Berlin’s Administrative Court told the Senate to do. According to the verdict, there has not been a legal reason to keep the pedestrian zone since the experiment officially ended months ago. Therefore, the street needed to be opened to motorized traffic within two weeks.

And this exactly was one of the issues during the experiment. Some of the few people who actually tried to walk in the pedestrian zone complained those cyclists were using the stretch between Französische Strasse and Leipziger Strasse as a race track. Pedestrians who had wanted to cross the bike lane had almost been run over.

The other problems with the experiment? Especially at the beginning, cars kept on entering the stretch because it continued to look like a street. Many business owners in the affected area did not agree with the rededication of the street in the first place. And the number of pedestrians in their own zone was disappointing. In other words: The experiment sort of failed, but the Greens would disagree with this claim.

According to Bettina Jarasch’s Senate Administration, the cars will be allowed back, but not for long. The permanent pedestrian zone solution is supposed to kick in before this year ends, and, obviously, there is not a lot of time between November 22nd and December 31st. This time, an “extensive consideration of all concerns” will be part of the strategy. Mrs. Jarasch’s people say they will even set up one-way streets around Friedrichstrasse if they have to.

“We are concentrating on meticulous plans in regard to the reorganization of the traffic in this part of the city”, Senator Jarasch stated. “I want Friedrichstrasse to become a lively and modern urban space, a spot we will like to go to and stay at.” She said she was still committed to “the car-free strolling promenade” that would be part of a traffic solution for the entire area. A layout competition was in preparation. This means that the Greens in the Senate do not know what exactly they will do in Friedrichstrasse, a few weeks before they intend to ban motorized traffic there again.