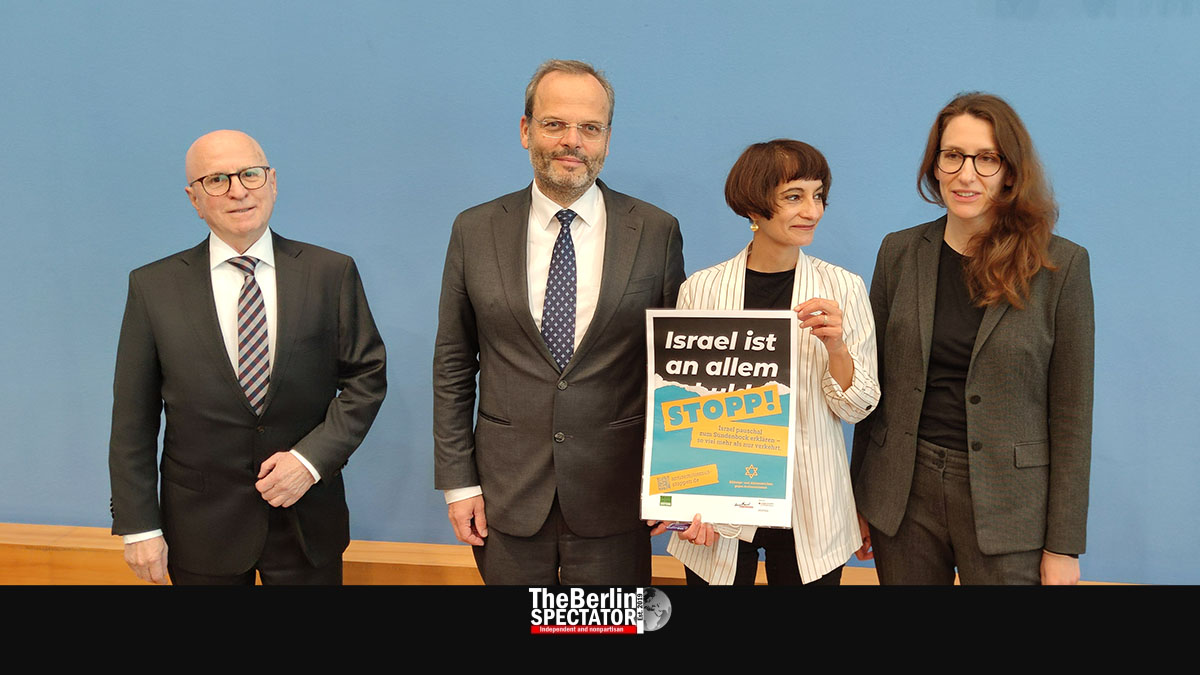 The word antisemitism is being used a lot these days, for a good reason: In the past few years, it has been on the rise in Germany as well. The government’s Coordinator Against Antisemitism, Felix Klein, just teamed up with the Central Council of Jews and two other organizations. They launched an awareness campaign and demanded action.

Berlin, November 8th, 2022 (The Berlin Spectator) — Four major stakeholders in the fight against Jew hatred in Germany are cooperating. They are Felix Klein, who became Germany’s first Coordinator for Jewish Life and Against Antisemitism when he was appointed by the government of former Chancellor Angela Merkel in 2018, the Central Council of Jews in Germany, the Amadeu Antonio Foundation and the ‘Memorial and Educational Site House of the Wannsee Conference’.

Klein and representatives of his partner organizations announced an awareness campaign and listed demands at a press conference in Berlin on Tuesday. They want the protection of Jewish establishments to be stepped up. Both “preventive and repressive measures” needed to be taken, in order to improve both “the feeling of safety and the actual safety.” In addition, they want the documentation of antisemitic incidents improved.

The third demand is a better funding for organizations that fight antisemitism and the RIAS centers at which incidents of Jew hatred can and should be reported. According to the four partners, these organizations should not have to fear for their funding every year, but be in the position to concentrate on their important work instead.

Felix Klein stated persons affected by Jew hatred needed to be heard and taken seriously. “Antisemitism concerns us all. Together, we have to make sure Jewish voices will be involved systematically”, he said. According to him, more than 3,000 antisemitic offenses were registered last year, almost one third more than in 2020. Demonizing Jews was “in vogue” even in “high culture” circles. He was referring to the antisemitic scandals that erupted at the Documenta contemporary art exhibition in Kassel. Klein, who announced a national strategy against antisemitism that is supposed to be introduced later this year, stressed no form of Jew hatred should be tolerated.

Mark Dainov is the Vice President of the Central Council of Jews in Germany. He said the largest violence potential against Jews originated from right-wing extremists. But there was a paradigm change in the arts and in science which was disturbing. Also, it was considered to be a justification among perpetrators with a left-wing extremist or Muslim background.

Tahera Ameer of the Amadeu Antonio Foundation told the press in Berlin, the typical “Never again!” statement was not an empty phrase, but a task for society as a whole. There needed to be an active and self-critical approach in regard to antisemitism. “We are almost running out of superlatives for those red lines that are being crossed all the time”, Mrs. Ameer said. She introduced an awareness campaign which is supposed to fight mainly Israel-related antisemitism. The first posters are being hung up these days.

For the ‘Memorial and Educational Site House of the Wannsee Conference’, Deborah Hartmann stated even memorial sites needed to deal with new forms of antisemitism.