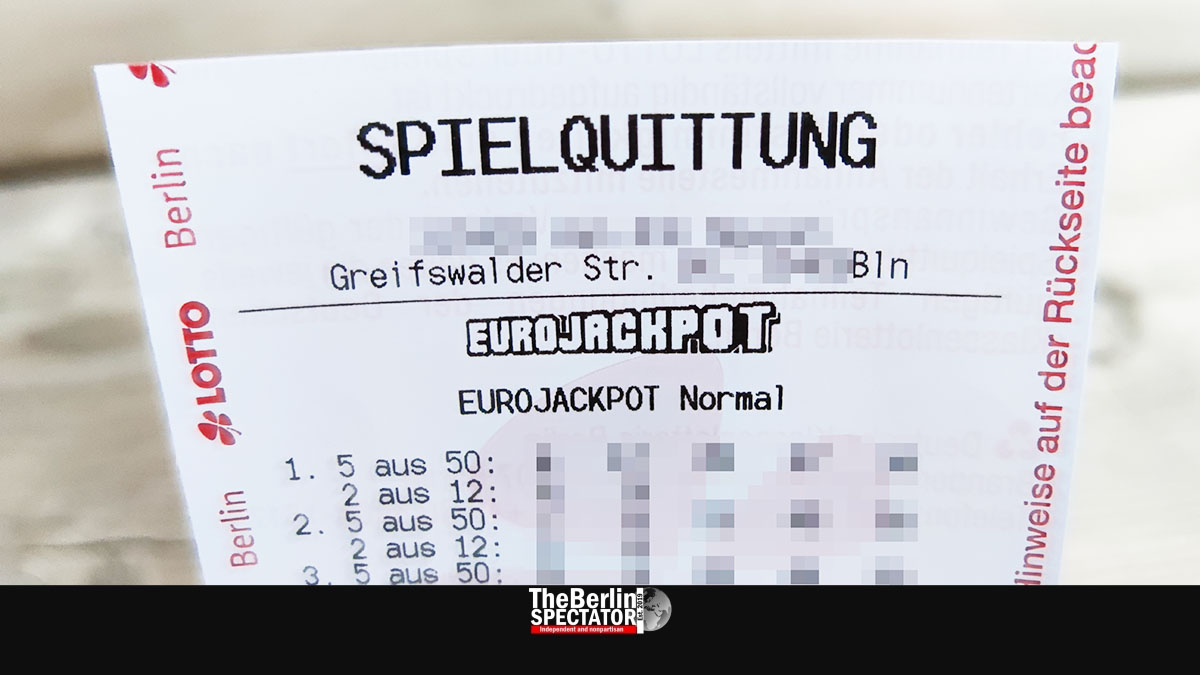 A Berliner, or a person from somewhere else who played the Eurojackpot lottery in Berlin, just hit the big one. In Germany, nobody has ever won this much before.

Berlin, November 9th, 2022 (The Berlin Spectator) — Germany, Belgium, the Netherlands and Switzerland combined have about 140 million inhabitants. Let’s say each one of them has a bed with a blanket and a pillow. Now, give someone a helicopter and tell that person to fly anywhere in those four countries, enter any apartment or house and hide a chocolate Santa Clause under any pillow, one of 140 million. Then, give another person one attempt to find the Santa. This is how likely, or rather unlikely, it is to win the Eurojackpot jackpot. There is one chance in 140 million.

A person or group in Berlin just found the Santa. As the lottery company Westlotto announced in Helsinki, someone in the capital of Germany just won 120 million Euro (120.78 million U.S. Dollars or 104.72 million Pounds Sterling). He or she, or the couple, family or group, whoever filled out the winning ticket, marked the right numbers, namely 15, 17, 23, 35 and 38, along with the right ‘Euro numbers’ 4 and 9. Since Germany does not want taxes for lottery wins, the winner(s) will receive the entire amount.

He, she or they can now afford 800 big 7-series BMWs, 240 nice family homes with gardens, 12,000 luxury cruises with all extras or 120 million small chocolate Santas. Had the winner(s) hit the biggest jackpot available a year ago, it would have been 30 million Euro less. In March, the maximum jackpot for the Eurojackpot lottery was increased and a second weekly drawing was added. This game is played on Tuesdays and Fridays.

More German players won 1,209,751.50 Euro (1,217,071 Dollars or 1,055,697 Pounds) each. Two of them are in Berlin, three in Bavaria, two in Hesse, one in North Rhine-Westphalia and one in Rhineland-Palatinate. Even more wins were scored in other European states. This lottery is played in a total of 18 countries. So far, the new maximum jackpot in the amount of 120 million Euro was won twice: Once, a lucky player in Denmark hit it in July, before the person(s) in Berlin won it yesterday night.

Obviously, a win of this kind is laughable compared to the 1.6 billion Dollars that are up for grabs in the American Powerball lottery right now. From this perspective, the Berlin lottery player just won some pocket change.

Germany has more lotteries, including Lotto, Spiel 77, Super 6 and Glücksspirale. In regard to the maximum jackpot, none of them comes even close to Eurojackpot. In the case of the Federal Republic’s national Lotto, the highest win available is 45 million Euro (45.27 million Dollars or 39.26 million Pounds). In all cases, the jackpots accumulate for a certain number of weeks.