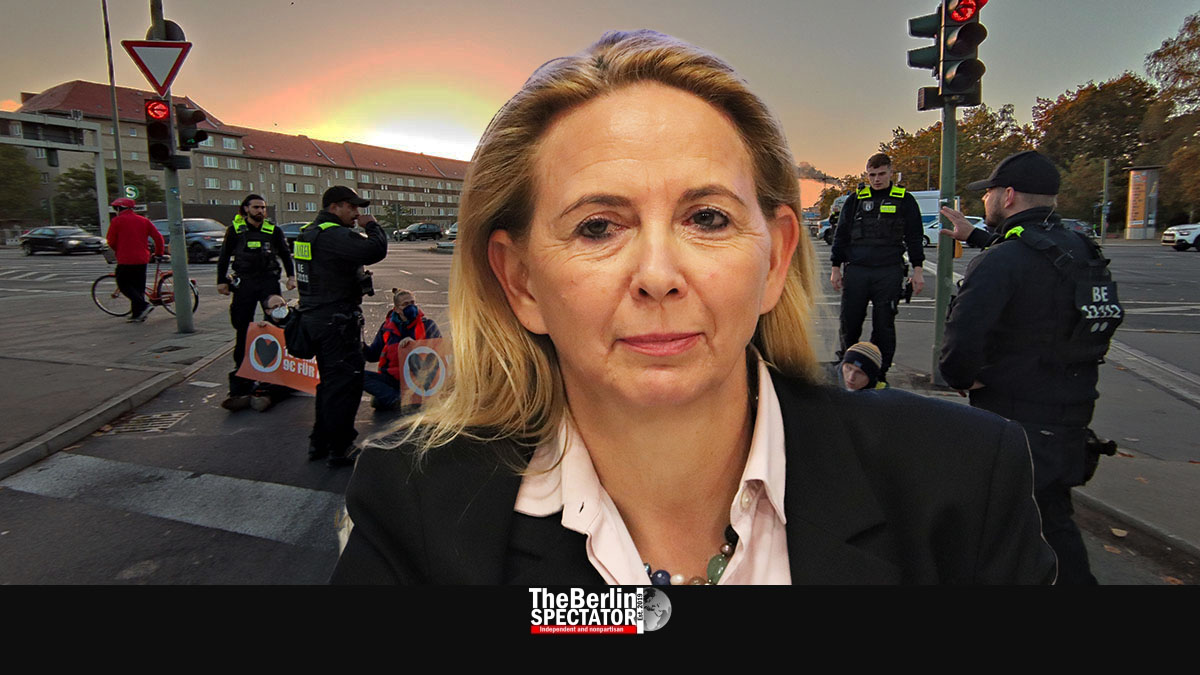 In Berlin, the prosecution and the police are in the process of stepping up the fight against the radical group ‘Last Generation’ that keeps on blocking the traffic. Police Chief Barbara Slowik wants to free the city from the activists’ “chokehold”.

Berlin, November 13th, 2022 (The Berlin Spectator) — For weeks, dozens of members of the radical group ‘Last Generation’ have blocked Berlin’s traffic almost every day. By doing so, they made thousands of Berliners wait in traffic jams they caused and allegedly kept ambulances from getting to people in need of help on time. The activists keep on extending their attempts to blackmail Germany’s democratically elected government, which it accuses of “crimes against humanity”.

In an interview with the ‘Welt’ daily, Berlin’s Police Chief Barbara Slowik said ‘Last Generation’ was causing an “extreme additional work load” for the police. Officers on the streets of the city and at the State Office of Criminal Investigations were using all means available to them to “free our city from the chokehold” these protest activities were putting it in.

Since the protests had commenced, the Berlin Police Department had handed over 570 related legal proceedings to the prosecution, Barbara Slowik told the paper. She said there needed to be ways to keep those protesters in custody longer. Berlin did not have to be as strict as Bavaria. This is where ‘Last Generation’ protesters can be locked up for 30 days. Keeping persons in custody for four days to protect Berlin against threats to public safety was a legal option until last year, according to Mrs. Slowik. Having the right to do so now “would help”, she stated.

The ‘Tagesspiegel’ daily reports, Berlin’s Attorney General’s office was in the process of checking whether ‘Last Generation’ is responsible for the formation of a criminal organization, which is an offense in the Federal Republic of Germany. Several complaints of this kind had already been handed in, the publication writes. Obviously, the fight against the group is on.

Berliners seem to be divided, in regard to their opinions about ‘Last Generation’. In certain circles, some say someone was finally doing something about the climate policy here. Others are annoyed because they keep on being blocked on the streets of Berlin on their way to work or to school. The group’s harshest critics say it was close to spreading “eco terrorism”, even though its members say this was about “non-violent protests” only.

‘Last Generation’ definitely is undemocratic, since its activists do not seem to accept democratic decisions, no matter how justified some of their demands, including a general speed limit on the German Autobahn, may be. This makes ‘Last Generation’ an extremist group. Accusing the government in this democratic country of crimes against humanity, and justifying its own actions this way, is something ‘Last Generation’ has in common with other radical groups, including some on the far-right and Corona denier organizations.

Earlier this week, the activists have been accused of keeping rescue vehicles from reaching people on time in emergencies. It was not the first time. The “B.Z.’ daily reports, the latest street blockade at Frankfurter Tor, a major intersection in Berlin’s Friedrichshain borough, had slowed down a special ambulance for stroke patients on Friday. Because of this blockade, the heavy vehicle’s driver had been forced to move forward on the sidewalk and a green area on a median strip. In stroke cases, every minute counts.

On the federal level, the conservative opposition party CDU announced it would hand in a draft law at the Bundestag next week, one that includes harsher penalties for ‘climate activists’. In the city state of Berlin, Transport and Environment Senator Bettina Jarasch said she did not see the need for legislative amendments.

In the meantime, ‘Last Generation’ announced it would now become active at airports.