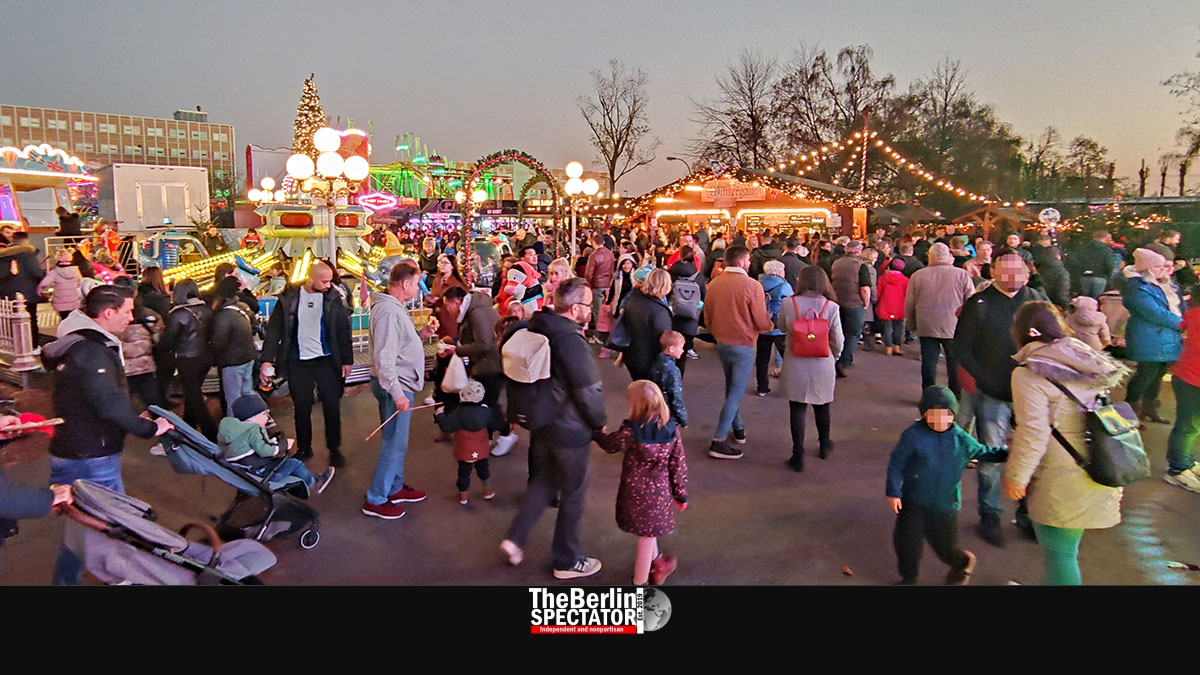 A big sign at the entrance to the ‘Winter Magic’ event at Frankfurter Allee declares it as a Christmas market, in spite of the fact that it lacks the most important features. There is a lot going on at this funfair, but a Christmas market is the one thing it is not.

Berlin, November 14th, 2022 (The Berlin Spectator) — “It is 60 meters high”, a Dutch lady in a tiny pay booth says with a big smile in her face. She is the owner of one of the highest objects in the entire city, a swing carousel that elevates people along a huge pole, until they look down at Berlin from an altitude of 200 feet. Not even the Wright brothers flew as high as the Berliners on this fun ride. This carousel is probably the most quiet spot at the entire funfair. After the ride, when the Dutch woman’s guests are back on the ground, they will have to adapt to noise and big crowds again.

Christmas markets are supposed to be sort of quiet places where people sell Christmas tree decoration and Christmas presents at little stalls in wooden huts, where ‘Jingle Bells’ or other Christmas songs play, where the smell of hot wine punch and roasted almonds is in the air, and where a Christmassy atmosphere is guaranteed. ‘Winterzauber’ (‘Winter Magic’), located close to Berlin’s ‘U-Bahn’ train station Magdalenenstrasse, seems to be a popular spot for its clientele, but it lacks all traits that could have made it what it claims to be.

Our reporter seemed to be the only person among tens of thousands who put on his mask whenever he was squeezed by big crowds he got into, which happened all the time. He walked by countless little carousels for kids. In little helicopters and airplanes, they flew in circles. They did so in sleighs pulled by deer and they boarded tiny roller coasters and trains for rides in circles.

Teenagers and adults had even more fun rides to choose from, including big carousels, including the ‘Musik Express’, the ‘Break Dancer’ and the ‘Devil Rock’, attractions that are so fast the people that ride them almost look like Roger Moore, as he tests the G-forces simulator in the ‘Moonraker’ movie. It is easy to lose the contents of your stomach in those rides.

Speaking of food: There are millions of ways to ruin your teeth. They offer bananas and apples with chocolate coating, candy floss, waffles, Spanish churritos, which are fried dough treats that are popular in Latin America as well, as well as all kinds of lollipops. Visitors who are hungry after a long day, or who just need to eat because they had too much of the hot wine punch and the hard liquor they offer here as well, have a big choice too. There are sausages of all kinds, mushrooms, steak sandwiches or French fries with all kinds of sauces. They have it all.

Now, what about the Christmas aspect? Our reporter looked, but hardly found anything, except for the sign that says “Weihnachtsmarkt” (‘Christmas market’), two big plastic Santas that serve as stalls at which people sell stuff nobody needs, and those roasted almonds. The summary: This funfair is being called a Christmas market because this title will pull more visitors. And that’s the only reason.

But the thousands of Berliners, including many families with kids, who showed up at this event in Berlin’s Lichtenberg borough, seemed to like it anyway. Berlin’s actual Christmas markets open on November 21st, 2022. Guess which publication will feature the most important ones soon.