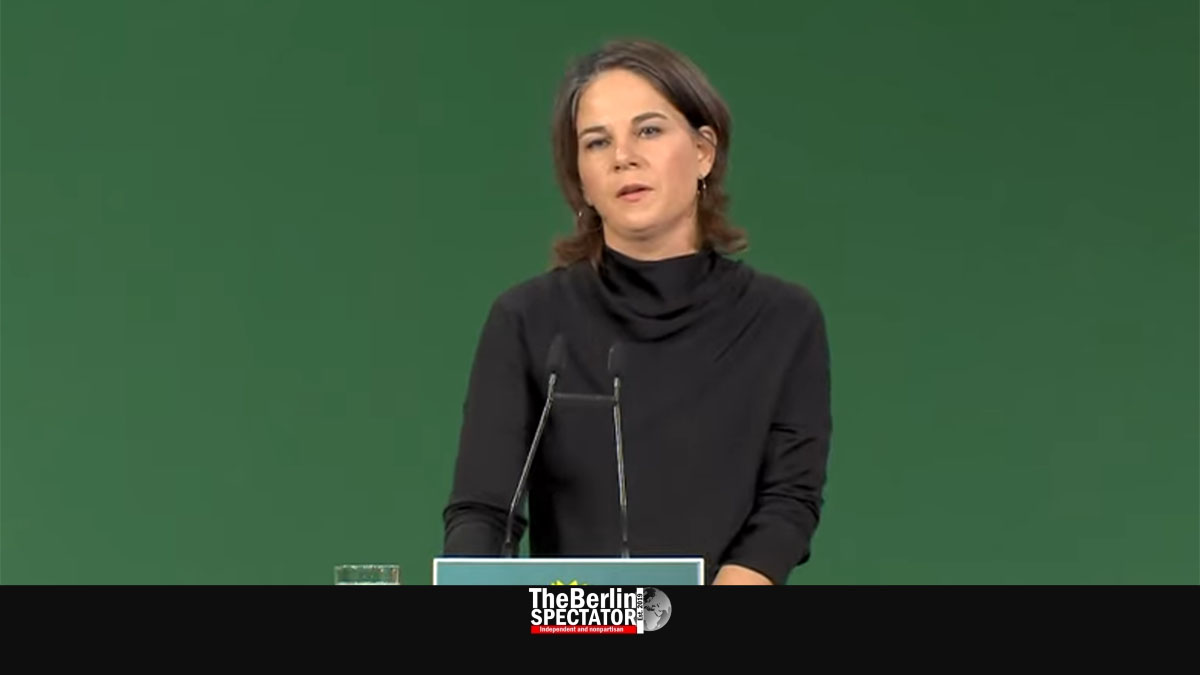 At the World Congress Against the Death Penalty in Berlin, Germany’s Foreign Minister Annalena Baerbock held the opening speech. She said paying like with like and taking life for a life was wrong, but conceded it was difficult to abolish capital punishment.

Berlin, November 16th, 2022 (The Berlin Spectator) — In Berlin, Foreign Minister Annalena Baerbock took part in the World Congress Against the Death Penalty. She slammed Iran, criticized other states that still have capital punishment and thanked those who fight it. This is her opening speech at Berlin’s elegant Pierre Boulez Saal, in its entirety.

“On behalf of the German Minister of Justice Marco Buschmann and myself, I would like to welcome you not only to Berlin, but also to this gorgeous venue. We did not choose it by coincidence, but on purpose – because this house and its music reflect what we are here for today: to celebrate life.

As of today, more than 50 states still carry out the death penalty. Among those states are countries from North to South, from East to West, small countries, large countries, democracies and dictatorships. We see with great concern how authoritarian regimes use the death penalty to repress political opponents more and more.

They are not carrying out the death penalty for severe crimes such as murder – but they are using it against people simply expressing their feelings such as who they love, people expressing their opinions or celebrating freedom and life, for example with music and dancing. Belarus this year expanded the list of crimes punishable with the death penalty – to threaten the opposition in the country.

Iran is executing hundreds of people every year according to Amnesty International – including members of the LGBTQI community simply for who they love. This weekend, we received reports that the regime has issued a first death sentence against a person who took part in the protests after the death of Mahsa Amini, who simply wished to live in freedom like many others. And the regime is threatening many more protesters with the death penalty.

We have left no doubt about what we think of the regime’s brutal repression against its own people. That is why yesterday, as EU Foreign Ministers, we put in place further targeted sanctions against those in Tehran who are responsible.

China, for its part, does not publish official numbers on executions. However, human rights organizations estimate that there are thousands of executions every year – more than in all other countries still using the death penalty taken together.

Sierra Leone did so last year. Minister Tarawalley, I applaud you for this courageous move. I also applaud Liberia and Zambia for embarking on the path of abolition, with respective laws in Parliament. And I am most delighted that Minister Kemayah of Liberia and Minister Haimbe of Zambia are with us today to report on these important steps for your countries.

The progress the world has made towards ending capital punishment is no natural outcome of history, however. It needs political leadership and often determination. We owe this progress to the work of so many activists, attorneys, artists, journalists and parliamentarians, who have championed this cause with great courage.

There is one NGO in particular that has pioneered this message around the globe: “Ensemble contre la peine de mort”, the organisers of this Congress. Aminata Niakaté and Raphaël Chenuil-Hazan, thank you for your dedication, your courage and your excellent collaboration!

All of you here in this room know that abolishing the death penalty is more than difficult. We see that in the variety of countries that still use it – from Indonesia to Japan, from India to parts of the United States.

Public opinion often supports capital punishment. And we all understand the pain of women and men who have been victims of horrific crimes you hardly can imagine – of mothers or fathers whose children have been brutally murdered, raped or abused. We understand how much they wish for the guilty to be punished. It is difficult to mobilize parliamentary majorities against the death penalty.

And I want to state this very clearly – and I think we all share this view: There is no question that severe crimes require severe punishment. But no matter how horrible a crime, no matter how deep the pain, we must not pay like with like. We must not take life for a life.

Because that goes against our firm belief in the very dignity of life. It goes against the core values we believe in. The values that unite us here today in all our wonderful diversity, through the European Convention on Human Rights and its 13th Protocol, the Protocol to the African Charter on Human and Peoples’ Rights on the Abolition of the Death Penalty, and the Protocol to the American Convention on Human Rights to Abolish the Death Penalty.

Capital punishment goes against the very belief in reason and human dignity that our societies are built upon – whether we hail from Europe, Africa, Asia or Latin America.

Still, we know that abolition is a very sensitive issue – it deeply affects countries’ national policies and their judicial systems. That is why we are coming together here not to lecture – but to listen and to learn from each other:

We need this discussion. We need this Congress and the dedication of you all. We need it for one simple reason: to move forward towards outlawing capital punishment around the globe. To walk ahead together on the path of humanity.”

Court Decision in Berlin: State Elections Need to be Repeated