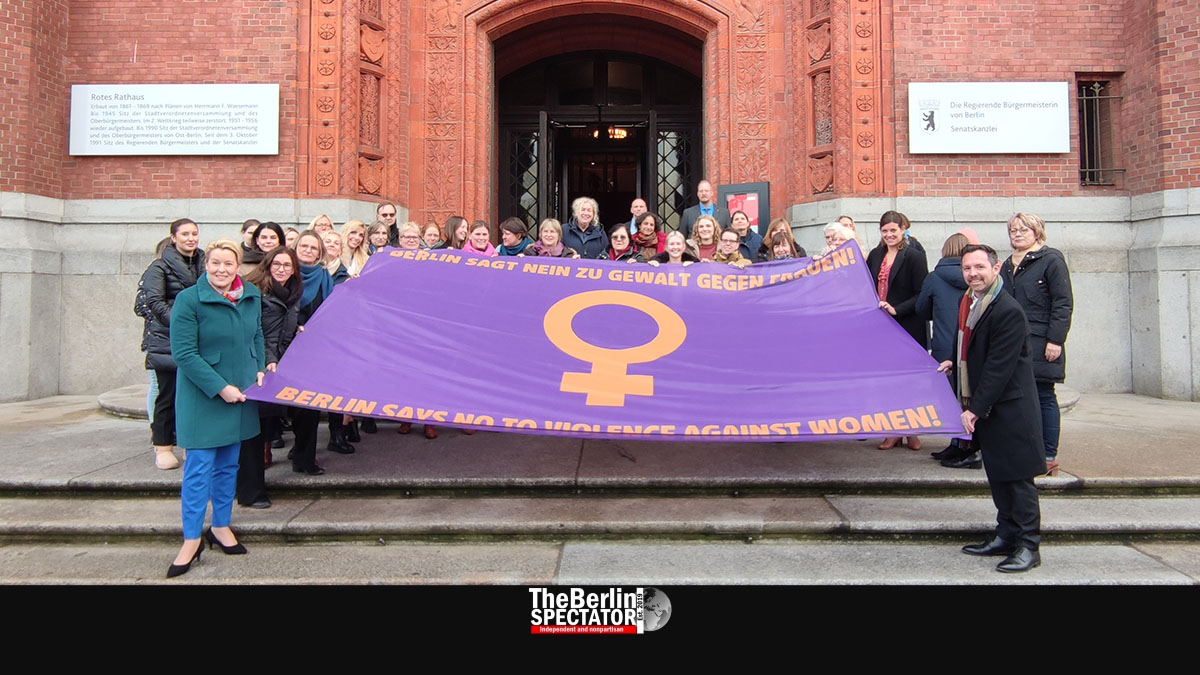 Far too many women become victims of violent partners or ex-partners at least once in her lives. In Berlin, more than 10,000 victims of domestic abuse were registered last year alone. The city state is working on a plan of action for more protection for women.

Berlin, November 25th, 2022. Update: 12:54 p.m. CET (The Berlin Spectator) — On this International Day for the Elimination of Violence Against Women, Berlin’s Governing Mayor Franziska Giffey hoisted “an anti-violence flag” at Red City Hall and had her photo taken with the flag and dozens of employees (see photo at top of page). She said one in three women in Germany was affected by violence at least once in her life. This was an everyday occurrence. By hoisting the flag, she wanted to raise awareness, Mrs. Giffey stated. In cooperation with initiatives and the civil society, the Berlin Senate was in the process of implementing the Istanbul Convention.

In 2021, exactly 10,693 victims of domestic abuse were registered in Berlin. The actual number is probably a lot higher. In 70 percent of the known cases, the victims were female. On Thursday, Berlin’s Senator for Women and Equality, Ulrike Gote, said she supported a campaign entitled “#teamgewaltfrei” (“Anti-Violence Team” with a hashtag). It was developed by the Initiative Against Violence on Women, an organization that raises awareness in regard to domestic violence.

Senator Gote stated discussing violence against women should not be a taboo. “We have to talk about it and we have to act together, not only today, but every day, as a team”, she said. She said one of the goals was to make sure women affected by violence had the support they were entitled to.

According to Ulrike Gote’s Senate Administration, Berlin does have a network of organizations that offer counseling and protection for women confronted with violence. Many victims of different forms of abuse, including violence at home, sexual violence, cyber violence, stalking, forced marriage, female genital mutilation and human trafficking, would be reached.

Next year, Berlin will be opening its eighth women’s shelter as well as a clearing house. The latter is supposed to serve as the first contactpoint for victims and facilitate their access to shelters. “Developing the support system further is an important aspect in the fight against violence against women”, Ulrike Gote stated. “Violence against women is a human rights violation.”

In front of the Berlin House of Representatives, an anti-violence flag will be hoisted today as well. “We are taking a stand against violence against women and girls”, the House’s President Dennis Buchner said. “Violence doesn’t just happen. In most cases, men use it against women. We have to become politically active, by creating prevention offers, by setting an example of new role models, and by breaking up the macho cult.”

The International Day for the Elimination of Violence Against Women is based on the date the Mirabal sisters were murdered in the Dominican Republic in 1960. They were political activists who assassination was ordered by dictator Rafael Trujillo. Later, the United Nations asked governments to support the day as an international observance.