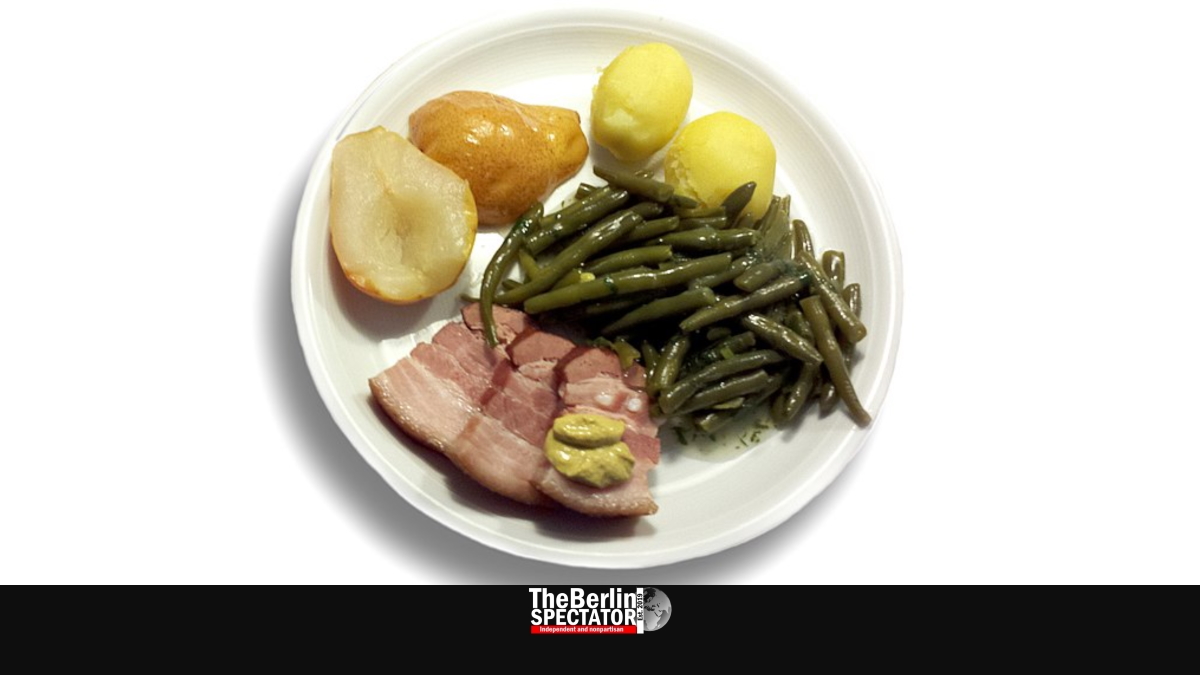 Made in Germany is a label that convinces people around the world. This applies to individuals who are holding the keys to the new Audi they just purchased, people who insist on listening to the entire 9th Symphony by Ludwig van Beethoven, but also to those who are hungry.

Berlin, April 21st, 2020. Update: December 11th, 2022 (The Berlin Spectator) — Sure, the German cuisine may not be as fine as the French one. But German food can be exceptionally tasty. Take our word for it. Did anyone say “calories”? Forget those.

Here we basically have two meals in one. Eisbein might not be kosher or halal, but it definitely tastes good. There is nothing better than biting into this soft, boiled meat, except for the more decadent version of this dish, called ‘Schweinshaxe‘. In this case, the pork hock is being fried, which is why it will have a crunchy crust. Do not eat this dish every day, but more like once a year, since it is heavy. Sauerkraut usually goes with it.

When it comes to potato salad, Germany is split. In the south, they make it properly. Boiled potatoes are being sliced and mixed with raw onions, chives, other herbs and sunflower oil. Some even add tiny pieces of bacon. There is nothing better than this kind of potato salad. In northern Germany, it looks different because they add huge amounts of mayonnaise. A terrible idea.

Since they are pasta pockets filled with meat, they are related to Italian Ravioli, Chinese Wan Tan, Russian Pierogi and similar dishes, at least sort of. But Maultaschen have their own distinctive taste. They either come in broth or in their fried version. Eating them with green salad is recommended. Some grated cheese on top of your southern German ‘Maultäschle’ (diminutive) also come with “Schmelze” which consists of melted butter and bread crumbs.

It may not look like much, but it is the most delicious Quiche Lorraine variation ever. Onion cake can be found in south-western Germany, including in the provinces Baden-Württemberg and Rhineland-Palatinate. Warning: Zwiebelkuchen can give people gas. There is a price for everything, right? But every crumb is worth it. Germans often enjoy their onion cake with Federweisser, their ‘new wine’.

We should stand in awe of Käsespätzle, especially when they are being prepared the right way. In Swabia, they know how to make them. Spätzle basically are German pasta, but they need to be freshly made. The right kind of cheese has to be picked. Fried onions should be put on top too. Those who are happy with the regular version may go straight to the kitchen now. For the others, there is one more task. What the Swabians call Schmelze needs to be added on top to make your Käsespätzle even more addictive. Dissolve a lot of butter in a pan and add bread crumbs. Pour the whole thing over your meal and start eating. You have reached the perfection level.