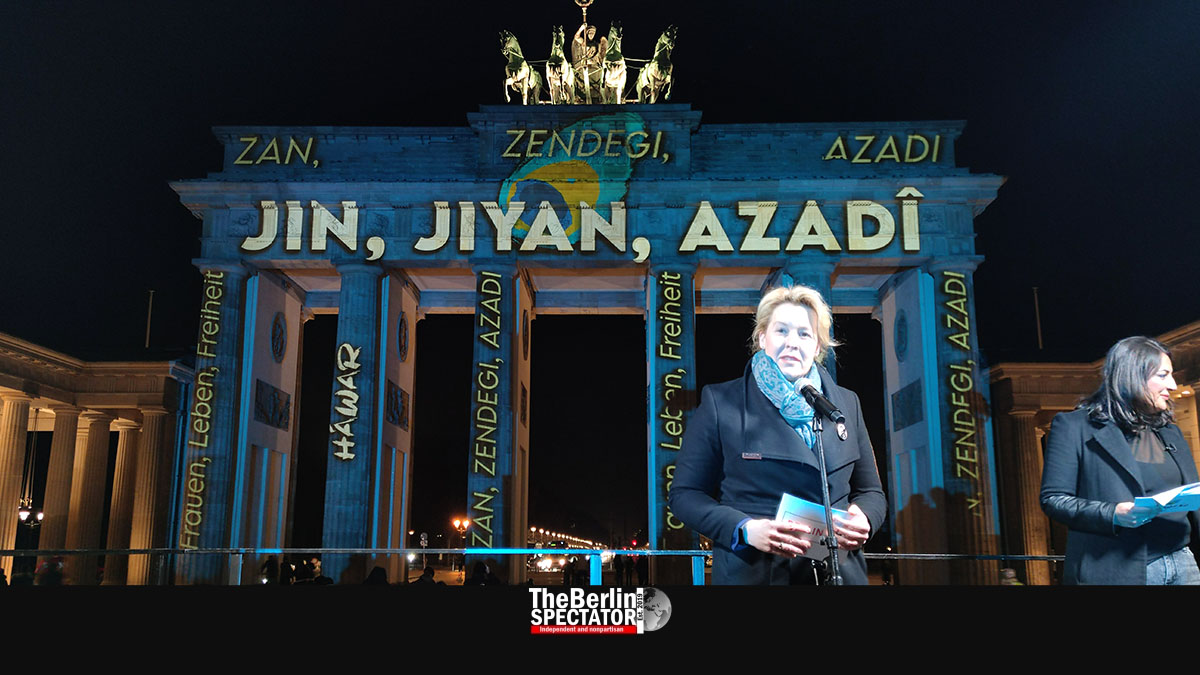 Since Mahsa Amini was killed in Tehran, Iranian protesters have used the slogan “Woman, Life, Freedom”. Brandenburg Gate was illuminated with those three words on Tuesday. Franziska Giffey said the execution of young people in Iran was “indescribably terrible”.

Berlin, December 13th, 2022 (The Berlin Spectator) — Almost eight decades after the end of Germany’s Nazi regime in Berlin, and more than three decades after the reunification, Brandenburg Gate is a symbol of freedom. On Tuesday evening, the Iranian slogan “Woman, Life, Freedom” was projected onto it. Since September, the courageous protesters in Iran have used it in their struggle against the mean, misogynistic, misanthropic Tehran regime. Berlin showed solidarity again.

In front of Brandenburg Gate, Governing Mayor Franziska Giffey said Mahsa Amini had been murdered 88 days ago. Since, countless protesters, among them women, children and men who had protested on the streets in Iran, had been arrested, injured, persecuted and killed. Berlin, the city of freedom, cared deeply, she stated.

“The execution of young people are indescribably terrible”, the Governing Mayor told some 400 people on site. “Over here in Berlin, Germany and Europe, it is our responsibility to stand by the side of those who are fighting for democracy and freedom.” Mrs. Giffey said Brandenburg Gate was not illuminated often. “We are doing this to make the world aware of our solidarity. This is an exception. In this situation, it is the right thing to do.”

The slogan “Woman, Life, Freedom” on Brandenburg Gate needed to be seen in the entire world. This was about giving courage to the people in Iran who lived in fear and who were worried about their loved ones and their own lives, to those who were risking everything because they wanted to live self-determined lives or just walk along a street with open hair, and to those who wanted to be equal as women.

Franziska Giffey said just looking the other way was not an option. The notion that the events in Iran were “none of our business” was wrong. “It is our business. This is about values our democracy over here is based on”. She stated she admired the “incredible courage” the Iranian protesters were showing.

Activists of the NGO Háwar recently addressed Franziska Giffey and asked her if Brandenburg Gate could be illuminated the way it was this evening. The Governing Mayor agreed. This evening, she said the fight for freedom needed to be heard and seen everywhere.