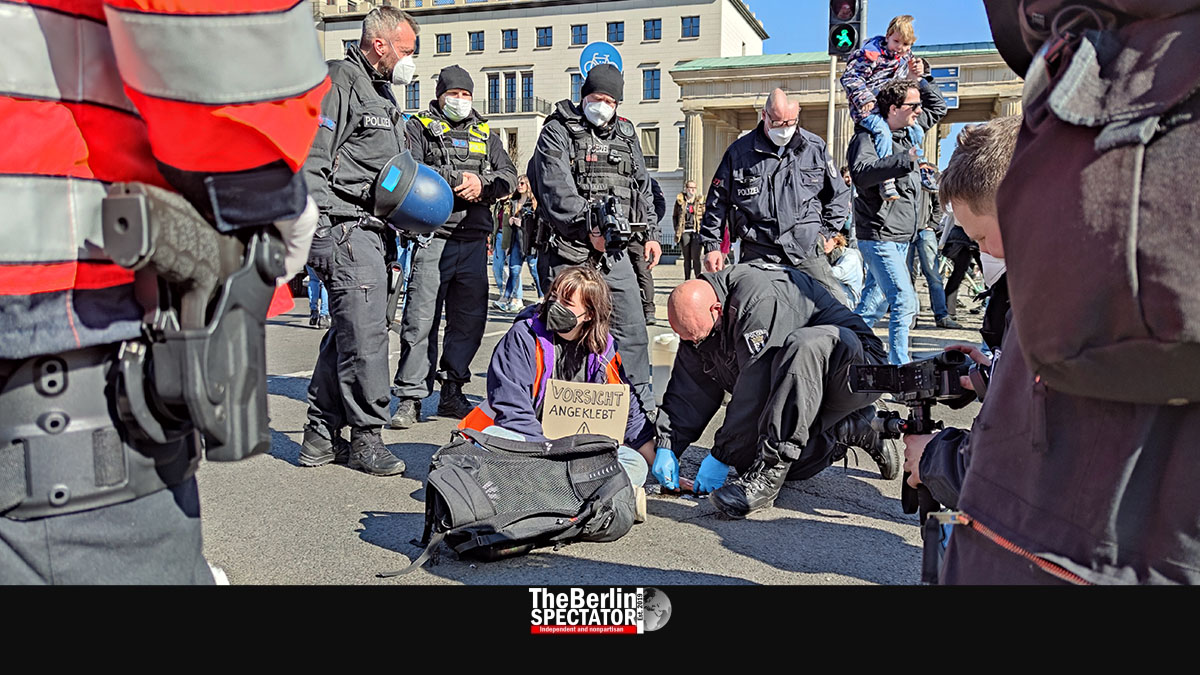 The prosecution in Neuruppin is investigating members of the radical environmentalist group ‘Last Generation’. Searches took place at eleven locations all over Germany on Tuesday.

Berlin, December 14th, 2022 (The Berlin Spectator) — In several parts of Germany, homes were searched by police officers on Tuesday. The raids were initiated by the prosecution in the Brandenburgian town of Neuruppin. A “low two-digit number” of activists are being suspected of the formation of a criminal organization .

The investigation is connected to protests ‘Last Generation’ staged against a large refinery in Schwedt, another town in Brandenburg province. According to the prosecution, the activists who were involved may also be responsible for disturbances at a public establishment, trespass and coercion. Nobody was arrested during the searches. Collecting evidence was the goal of the operation.

For months, ‘Last Generation’ members have glued themselves to streets, Autobahn exists, sign gentries, taxiways at airports, ministries and exhibits in museums. This mainly happened in Berlin and Munich. But all of these activities are not part of this particular investigation. This is all about the protests in Schwedt.

‘Last Generation’ commented on the searches by portraying its members and their families as victims. The group sent out a statement saying that, at 6:00 a.m., uniformed officers had been walking around a house with flashlights. At the same time, others had forcefully opened the door to an apartment of an elderly lady wearing a pacemaker. Her son, who usually lived with her, had already been behind bars.

“While the state is disobeying the constitution by neglecting the climate protection, the police are searching the apartments of those who are doing everything to bare this situation peacefully”, a statement read. “The term criminal organization sounds so dangerous. But the actual danger is being swept under the carpet”, the radical group said.

Again, ‘Last Generation’ accused Germany’s democratically elected government of being “criminal”. On its website, it has accused it of “crimes against humanity”. The latest statement says the group had known that the state would not just tolerate the protests during which the government’s failures would be publicized.

As opposed to Berlin, Bavaria chose a tough approach against ‘Last Generation’. Activists who block the traffic are being locked up for up to thirty days. The city of Munich issued a general ruling which forbids ‘Last Generation’s protests until January 8th, 2023. But this is not related to the latest raids.