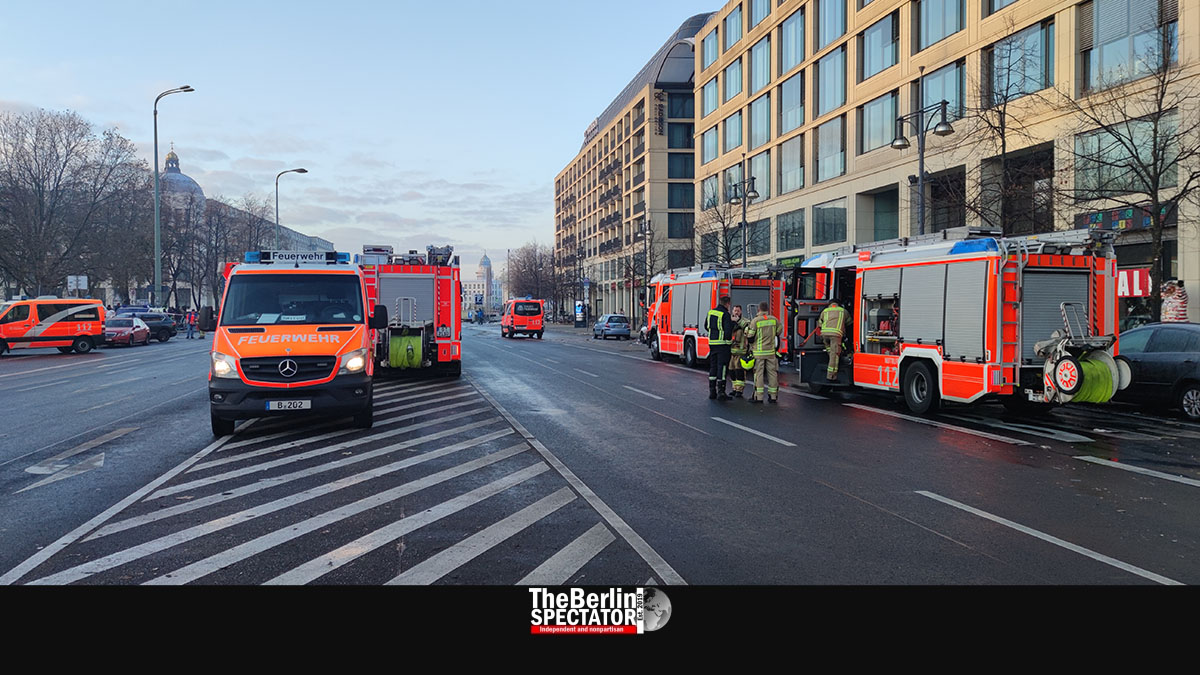 In Berlin’s city center, a huge aquarium with 1,500 fish burst in the early morning. A million liters (264,172 gallons) of water flooded and damaged a Radisson Hotel. The guests were woken up and evacuated. Two hundred police officers and firefighters are on site.

Berlin, December 16th, 2022. Update: 12:46 p.m. CET (The Berlin Spectator) — The ‘Dom-Aquarée’, a building in the heart of Berlin, just a few steps away from Berlin Cathedral, accommodated ‘Aqua Dom’, a giant aquarium, until it burst this morning at 5:45 a.m.. A million liters of water flooded the lobby of the Radisson Collection hotel located in the same building. Two persons were injured.

A big mess developed as a result. All the water devastated the hotel lobby. Furniture and other items were carried out of the building by the flooding and ended up on the street. Karl Liebknecht Strasse, a major traffic artery in Berlin’s Mitte district, was closed by the police. The morning traffic was rerouted. Due to temperatures well below the freezing point, the water from the aquarium froze on the street.

The aquarium burst while hotel employees were preparing the breakfast. Obviously, some of their colleagues must have been at the reception and elsewhere in the lobby. After 6:00 a.m., a hundred firefighters were on site. So were a hundred police officers. The building was searched with police dogs, just to make sure nobody was missed.

Because of the devastation, all 400 guests had to be evacuated. A lady from Norway who was waiting to be registered by the police before she would enter a bus with everyone else said she had heard a loud noise. Later, hotel employees had knocked on the door and told her to evacuate. Two women from England said the hotel building had been shaking when the aquarium burst. It had felt like an earthquake.

A gentleman who also is from Britain told The Berlin Spectator he had been asleep when it had happened, which was why he had not heard the noise. Then, they had woken him up. “I guess I’m homeless now”, he stated. All of the Radisson’s guests had to wait outside, at -8 degrees Centigrade (17.6 degrees Fahrenheit) before they were allowed to enter heated buses provided by the Fire Department. Later, they were sent to other hotels in the city.

According to the police, nothing is pointing towards a sabotage act right now. Why the aquarium burst is unclear. Recently, it had been renovated. Berlin now has one tourist attraction less. One thousand and five hundred fish are dead. The clearing work might take all day, and the investigation even longer. Experts are trying to establish to what extent the building may have been damaged.

Berlin’s Governing Mayor Franziska Giffey said the news about the burst aquarium was “terrible”. She added the exact situation was still unclear and thanked all police officers and firefighters on site.