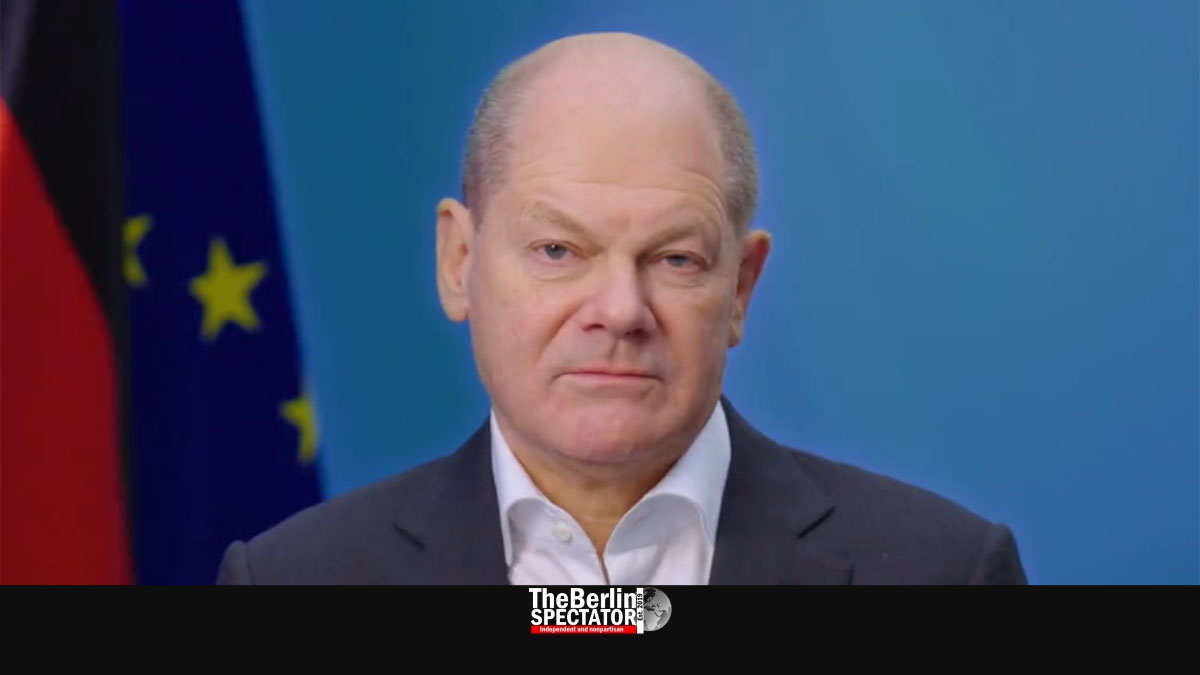 In his weekly podcast, Olaf Scholz stated this year had “challenged us a lot”. This especially applied to the Ukrainians who would have to fear Russian bombs even during the holidays. In an interview, the Chancellor accused Vladimir Putin of breaking international law.

Berlin, December 18th, 2022 (The Berlin Spectator) — Fourteen days ahead of New Year’s Eve, and only a week before Christmas, Olaf Scholz said people in Ukraine were still worrying about the lives of their loved ones, because of the continuing Russian attacks on their country. In 2022, the German people had felt the repercussions of the war as well, due to the inflation and energy price hikes, Scholz stated in his weekly podcast. “But we did stick together.”

The Chancellor also commented on the war and the energy crisis in an interview with the ‘Süddeutsche Zeitung’ daily. He hold the paper his government’s goal was to compensate for Russian natural gas imports next year as well. “In spring, nobody believed we would manage to get along without Russian gas this year. But, with big efforts, we did. And we will continue with those efforts in 2023.”

On Friday, Scholz had taken part in the inauguration of Germany’s first liquified natural gas (LNG) terminal in Wilhelmshaven at the North Sea Coast. He said the first natural gas freighter had already made a delivery. Germany needed to become less dependent from individual countries. For now, natural gas would come in from Norway, from the United States of America, from the Gulf region and the Netherlands. Scholz repeated Germany would not engage in fracking, also because there was no support for this approach.

Asked whether Germany would deliver the Leopard 2 combat tank to Ukraine in 2023, as the government in Kyiv had requested, Scholz explained there were three principles he would continue to stick to: First of all, Germany would continue to make every effort to support Ukraine. Secondly, “we are avoiding a direct confrontation between NATO and Russia.” Thirdly, there would not be solo action on the part of Germany. Scholz said his impression was that a large majority of Germans supported this policy.

In the interview with ‘Süddeutsche Zeitung’, Olaf Scholz accused his Russian colleague Vladimir Putin of breaking international law by attacking the Ukrainian energy infrastructure “with relentless brutality”. He said he had told the Russian President so during a recent phone conversation. Putin needed to end the war, pull out his troops and create the conditions for rapprochement.

“Our hope for 2023 is that Russia ends its war of aggression and that Ukraine defends its integrity”, Scholz stated. Asked whether he would go to Moscow in 2023, he said talking to Russia was important, but it was unclear whether this would happen by phone, video connection or at a long table.” A cooperation with Russia in the future was a possibility once the country was capable of peace, but this time had not come.