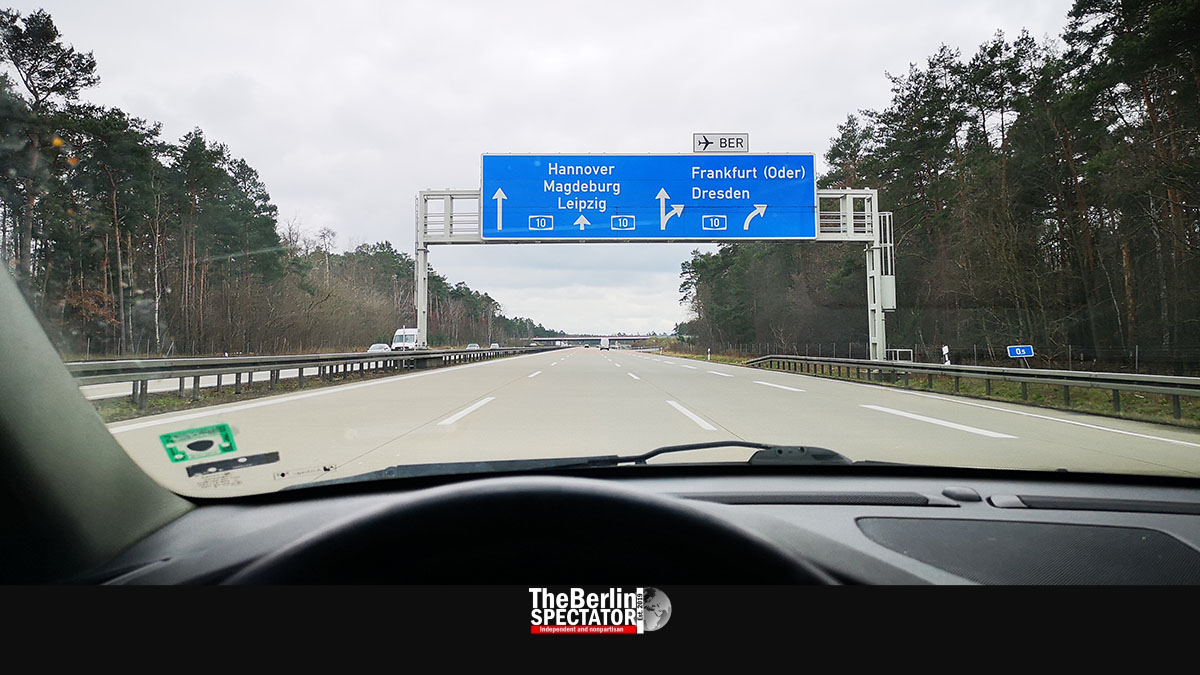 Germany is known for cuckoo clocks, great bread and cake, stunning classical music and machines of all kinds. It is a popular tourist destination, also because of its wonderful countryside, especially in the south. And it has the Autobahn.

Berlin, August 5th, 2021 (The Berlin Spectator) —  Hitting the Autobahn is a good idea, unless there are bad traffic jams. Germany’s freeway (British English: motorway) is different from those in all other countries on the planet, also because there is no general speed limit. But there are rules. And there are other things we should know before we get going.

Some Autobahnen (plural) have four lanes, two in each direction, others have six. Around Frankfurt and other large cities in western Germany, some stretches have eight or even ten lanes. There are motorists who believe they can just pick the middle lane, or one of them, because they feel like it. They probably believe the right lane is for trucks and vehicles with Dutch number plates that pull caravans, while the left lane is for self-proclaimed hot shots with their Lamborghinis and Aston Martins. So, the middle lane is for “normal” individuals, right? Wrong.

By law, we have to use the right lane, unless we overtake vehicles. When we intend to pass cars on the middle lane, we hit the left lane. Once the overtaking process is completed, we have to return to the right lane. Those geniuses who occupy the middle lane just for the fun of it will be fined if they are caught. Obstructing traffic is an offense.

The Autobahn still does not have a speed limit, in spite of a “slight” problem called climate change. But there is a minimum speed. It is 61 km/h (38 mph). Vehicles that cannot reach this speed are banned from using the Autobahn because they would create traffic jams all the time and endanger everyone else. So, if you have a 1977 Austin Princess with a broken transmission which will not let you switch into third or fourth gear, stay the hell away from the Autobahn. Just go straight to the next junkyard.

There are only a few German words you need for the Autobahn. Three of them, to be exact. They all start with the letter ‘A’. The first one is Autobahn. Auto should be obvious. Bahn stands for track, path, alley, railroad, orbit or lane. The second word you need is this one: An “Ausfahrt” is an exit. So, you want to get the hell out of there? Use the “Ausfahrt”. The third word is “Autohof” which basically means “car yard”. Check out number 7 in order to know what the “Autohof” is all about.

Once you raced along the Autobahn for a few hundred miles, you will need gasoline, Diesel (or a loading spot for your electric vehicle). Since you will not want to spend more than absolutely necessary, do not (I repeat: do n-o-t) go to those gas stations located at service stations on the side of those German freeways. They are run by vampires.

There are two better alternatives. Either leave the Autobahn anywhere and find a town with a gas station, or wait for a sign that says “Autohof” and follow it. Those “Autohöfe” (plural) are usually located about a mile from the “Ausfahrt”. You will save a lot of hard currency there. Yes, it will still be expensive because of the fuel tax the state swallows.

Speed limit? What speed limit? Right, there is none. At least not a general one. Not on the Autobahn. But there are limits in construction areas, on dangerous stretches, around cities and tight curves. In addition, there are weather-related speed limits. This has to do with decreasing the danger of aquaplaning. Keeping the traffic flow alive or reducing the noise the Autobahn causes are two more reasons for speed limits. But if you really want to race your 911 at full throttle, you will find stretches without. For now. Our prediction is that the next federal government will push a speed limit through the Bundestag rather soon. Yes, the race is over.

An Autobahn ramp is not an intersection at which motorists stop to let others go. Yes, motorists who are already on the Autobahn have the right of way, but they will make room for you whenever they can. The secret is to accelerate substantially on the ramp. That way you can merge into the flowing traffic without creating problems. In order to make sure you do not create a mess on the right lane, which is occupied by big trucks in many cases, just overtake them on the ramp, and then merge onto the lane. This requires some speed.

On the Autobahn, the traffic flow is important. By accelerating, slowing down and accelerating again, motorists can disrupt it. Besides, they annoy the other traffic participants. Seriously, there are contemporaries who slow down after overtaking someone. Once the other driver gets ready to overtake the vehicle that just overtook him, they accelerate again. Find your speed and try to keep it. Amen.

There are lots of traffic jams on the Autobahn. They are being caused when there is just too much traffic because everyone is trying to get to work or back home. Yes, this mainly happens in and around big cities. Construction sites lead to rather long traffic jams as well. So do accidents. In the latter case, the police and ambulances need to get through the mess quickly. For this reason, an emergency lane should be created between the fast lane on the very left and the one next to it. Just move towards the guardrail as much as you can, if you are on the left lane, or move your vehicle closer to the cars or trucks on the right lane. That way, emergency vehicles can pass.

Oh yes, those trucks on the Autobahn can be annoying. Their maximum speed is 80 km/h (50 mph). When there are too many of them, or when they try to overtake, they slow down everyone else. Motorists in passenger vehicles swear a lot when they end up behind those trucks. On the other hand, they would be very hungry if those trucks were not there, meaning those shelves in the nation’s supermarkets would be empty. Most goods in Germany are being transported on the road. But there is one helpful invention called the Sunday driving ban. On Sundays and official holidays, trucks above 7.5 metric tons may not move around in Germany from 00:01 a.m. to 10:00 p.m.. Trucks which transport perishable food have special permissions. During the Corona crisis, the Sunday driving ban has been suspended at times, but those big trucks will disappear on Sundays, in most cases.

Germany has 12,993 kilometers (8,073 miles) of Autobahn. Since the reunification, the ones in the eastern part have been refurbished, and more east-west connections were built. The idea is to let motorists travel without traffic lights or intersections that would make them stop every two seconds. Of course, there are obstacles on the Autobahn. For instance, more than 800 construction sites are obstructing traffic right now. During the summer vacation traffic, this does not really help. On the other hand, the Autobahn needs to be kept in a good shape.

There is Autobahn tourism. At least there was before Corona. American and Japanese tourists used to come to Germany to rent fast BMWs or Audis and race back and forth, just for the fun of it. There is Autobahn music too. Kraftwerk, the pioneers of techno music, recorded a piece called ‘Autobahn’ in 1974. Of course, the history of the Autobahn has a very negative connotation, because its construction commenced in Nazi Germany, the fascist predecessor state of the free and democratic Federal Republic of Germany.

Elections 2021: Whom do the Germans Want as Chancellor?