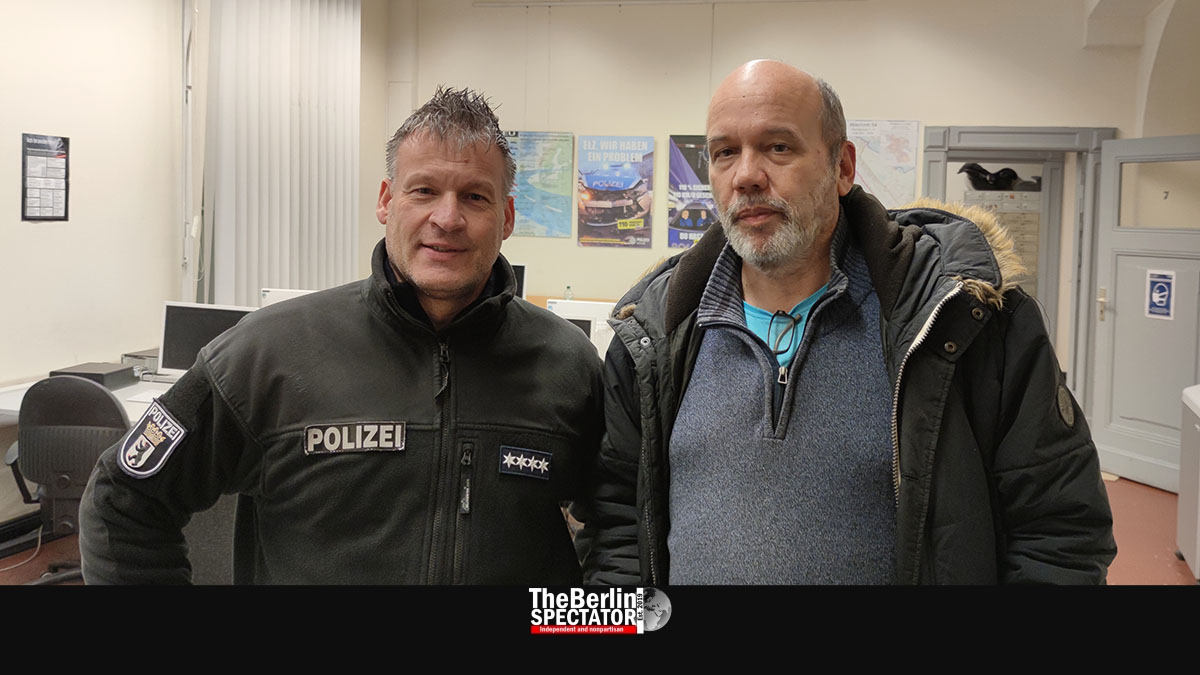 In Neukölln, our reporter was on patrol with cops on Christmas Eve. They tried to save a life and dealt with a shooting, a water leak and a possible burglary. One thing is certain: Not everyone in Berlin had a merry Christmas.

Berlin, December 25th, 2022 (The Berlin Spectator) —  Before 6:00 p.m., the mood is good in precinct 54. At the police station in Sonnenallee, the officers who were on duty on Christmas Eve brought good treats. Everything was available, including loads of chocolate, cookies and cake, but also potato salad and Lahmacun, a Turkish dish that consists of meat wrapped in pizza dough. Someone even brought a pasta salad with mayonnaise.

German cops are not as stiff as some people might think, at least not in Berlin. In the staffroom, one of the few police women on duty tries to untangle a chain of Christmas lights hanging on her, while some of her male colleagues share a laugh and consume spiced cookies and soda. Their police vests and bags are all over the floor as they are waiting for the day shift to leave. In the next room, some colleagues are busy writing their reports.

Everyone knew this would not be the most stressful night. Some of the officers here did not have a choice, meaning their names were written into the duty roster by their superiors. Others volunteered for Christmas Eve, for different reasons. Karsten Bonack was one of them. At precinct 54, he is a group leader. The reason he was on duty yesterday night was The Berlin Spectator’s request to accompany cops on Christmas Eve.

Bonack is one of Berlin’s most prominent police officers. He was among the six cops who protected the Reichstag building on August 20th, 2020, when hundreds of self-proclaimed ‘citizens of the Reich’ and other right-wing extremists broke a barrier during a protest and tried to enter the famous building which accommodates the Bundestag. Later, he and the colleagues who helped him were honored by President Frank-Walter Steinmeier.

“On that day, we were attacked by protesters”, Karsten Bonack remembers. “They used flagpoles and kicked us. So, quite a few of my colleagues were injured.” When those radicals broke the barrier, he and his colleagues had “tried to prevent the worst from happening”, he says. As opposed to the events at the Capitol in Washington D.C. half a year later, on January 6th, 2021, the attempt to storm the Berlin Bundestag was not ordered by the head of government, and the extremists did not actually manage to enter the building, thanks to Bonack and other heroes from the Berlin Police Department who protected Germany’s democracy.

In this part of Neukölln, between Hermannplatz and Treptow, the precinct usually sends out five patrol cars at night. But, because Christmas Eve usually is quiet, one of them was cancelled. Since Karsten Bonack and I were part of one of the patrols, we got the only Mercedes Vito available. It provides a lot of room on the back seat and in the trunk. Those Opels they use are far too small for police purposes. They must have been ordered by officials without knowledge of police officers’ needs.

Shortly after 6:00 p.m., we were on the street. After moving back and forth on Sonnenallee and a few side streets, our first case was called in. A water damage in an apartment block in Fuldastrasse needed to be looked at. When we arrived, fire fighters were in the process of breaking into an empty apartment on the third floor because of a suspected leak. Tenants on lower floors reported water stains on their ceilings. On the ground floor, a resident was confronted with water dropping down from his kitchen lamp.

Later, we tried to track down juveniles who lit firecrackers and threw them at buildings and people. But by the time we got to the location, they were gone. Then, at 8:16 p.m., the dispatch called in a more serious incident. A guest at a bar in Wipperstrasse supposedly went out on the street several times to fire shots in the air from a blank gun.

Inside the smoke-filled establishment, two guests played on slots while the others smoked and drank. Nobody there had the slightest idea who fired the shots. At least that is what they said. Officer Bonack ordered a guest to get the owner. Minutes later, he conveyed a clear message to him: “If this happens again, we will return and close down this place.”

Another twenty minutes later, we raced through the streets of Berlin with emergency lights and the siren yet again. According to the dispatch, a man in his 50s was unconscious in an apartment at Neuköllnische Allee. When we arrived, a young family member, the man’s son, was waiting on the street, crying. We ran up the stairs. In the apartment, the father was lying on the floor, on his back. An elderly lady and more family members were around him, crying as well.

Since the ambulance had not yet arrived, officer Bonack performed a heart massage immediately. It was unclear why the family had called the emergency number rather late. Once they finally arrived, the medics requested an emergency doctor from their dispatch and used their defibrillator eight times while they waited. Because nobody in the family spoke German, a cop from our patrol car called his Arabic father. He translated the conversations between officers and the worried family on the phone.

Later, when we were on the street again, we were told the man had been declared dead. It was not surprising, but sad. To his family, December 24th, 2022, was an extremely sad day. Obviously, police officers learn to deal with the sad stories they run into, and all the misery which Neukölln is full of. “I do sleep well”, Karten Bonack says. After 38 years of working as a cop, he knows how to cope with sad stories.

Absolutely everything happens in Neukölln all the time, including accidents, suicides, stabbings and domestic abuse. The same part of Berlin is known for violent protests, including antisemitic ones, criminal family clans, posers, arson on cars, drug-related crime and countless other issues.

At 9:20, the next message from the dispatch comes in. A resident in Aronsstrasse says her neighbor had broken into her apartment and damaged her property. As we get there, the victim is desperate. Her TV set is broken. So is the window of her oven. The lady seems helpless. She insists the police should install a new lock for her door, but this is not the kind of service the Berlin Police Department provides.

Racing through Berlin with three likeable, capable and calm cops on Christmas Eve was a good experience. It would have been less sad if the man in Neuköllnische Allee had not died. But it is good to know Berlin can rely on cops like Karsten Bonack and his colleagues, on Christmas Eve or any other day.