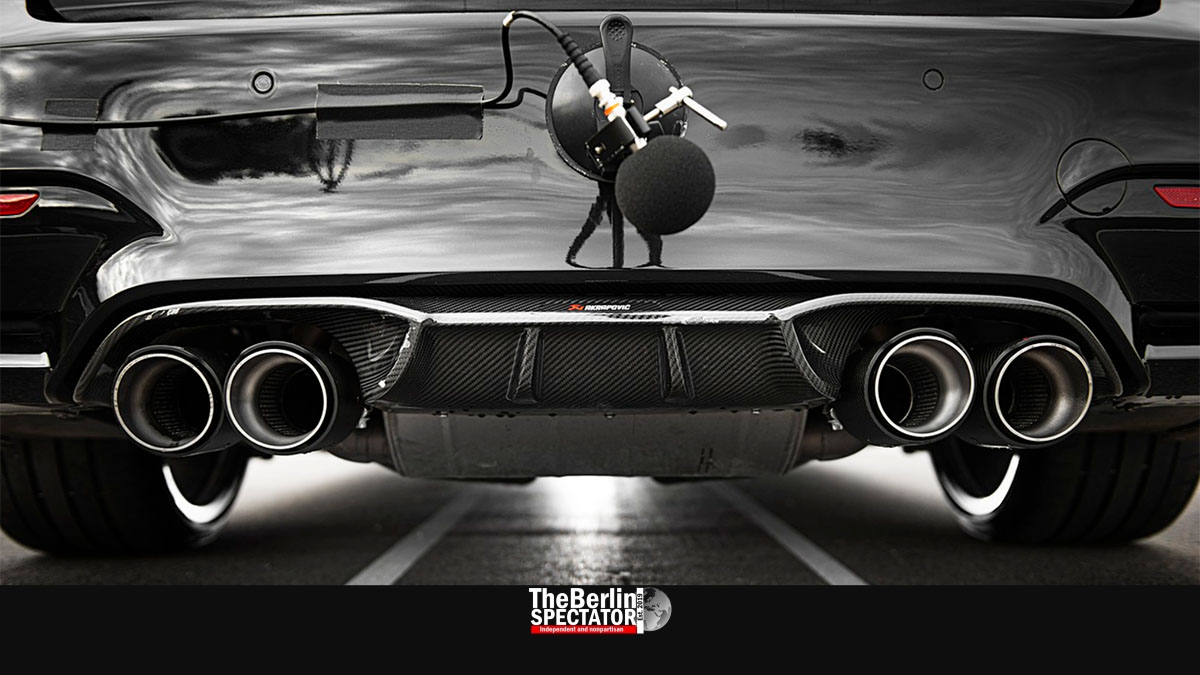 When those hotshots with their loud motorbikes or cars drive by, they want to be admired. Because they love their noise so much everyone else has to be fond of it too, right? Wrong. Berlin is about to test a new device the police might use to catch and fine motorists who cause too much noise.

Berlin, December 22nd, 2022 (The Berlin Spectator) — Berliners who wake up babies and cause headaches day in, day out, with vehicles that are far too loud, are usually males aged 18 to 35. They drive AMG Mercedes with 6.3 liter engines, BMWs with rear spoilers or big, lowered Audis. None of those fancy vehicles sound like this when they come out of the factory. Their owners have loud exhaust pipes installed. In some cases, they can switch the noise on or off by pushing a button on their keychain.

What they are doing is illegal. In many cases, those vehicles exceed Germany’s maximum noise level by far. But, in Berlin, those showoffs do not have to fear much, at least for now. The likelihood of them being stopped and fined by cops is low in Berlin, a city with 3.8 million inhabitants and a rather busy police. So, those drivers seem to be compensating for tiny body parts or double-digit IQs by annoying the entire city with their noise.

In Germany, regular cars may cause a noise level of up to 72 decibel. The maximum for sports cars and other vehicles with big engines is 75 decibel. Motorbikes should not be louder than 77 decibel, no matter if their owners had new exhaust systems installed or not, the law says. In too many cases, posers and other self-proclaimed hotshots ignore those limits.

For now, the risk of being caught is minimal, because the Berlin Police Department has only ten sound level meters. This is what it says in the Berlin Senate’s answer to an official inquiry handed in by Felix Reifschneider, a member of the Berlin House of Representatives who is part of the center-right party FDP.

He wanted to know how many cases of noise pollution in Berlin’s traffic were penalized in the past five years. The Senate’s reply is surprising: In 2017, 2018 and 2019, not a single motorist was fined for causing excessive noise, even though the city was (and still is) full of those young men whose self-esteem seems to be connected to the noise of their engines. In 2020, 31 of them were caught. This number increased to 40 in 2021. Then, from January to September of 2022, as many as 211 motorists got into trouble because of their noise.

The Berlin Police Department is stepping up the fight. According to the Senate, Berlin is preparing the rental of one single ‘Noise Trap’ for testing purposes. It is a prototype system known as ‘Hydre’ by the French company Bruitparif which was already tested in Paris. After the test phase in Berlin, the results will be “evaluated scientifically”. Owners of vehicles with loud exhaust pipes who cause the noise the machine will be measuring are not supposed to be fined during the test phase.

Indecent Proposal: The Dark Realities of Finding Housing in Berlin