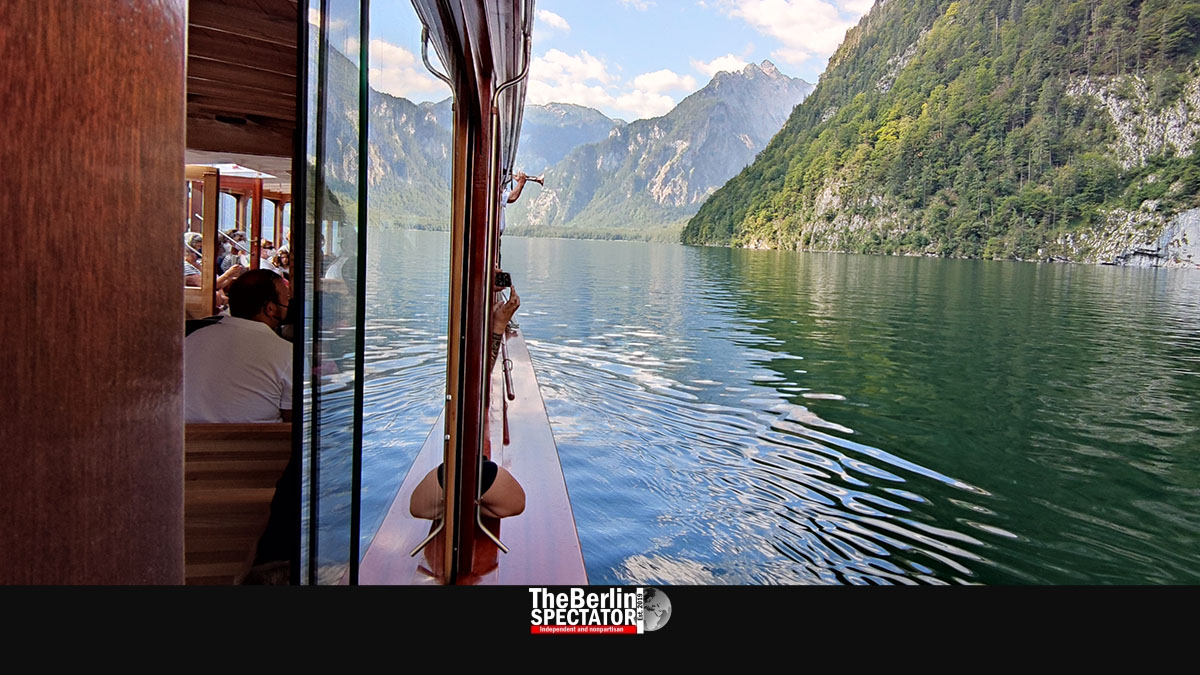 Germany has quite a few wonderful locations. Königssee, the Lake of the King in Bavaria, is the prettiest one of them all. The question is: Are you just going to follow the crowds and have plum pie at the café? Or are you ready for a serious mountain tour?

Berlin/Königssee, September 1st, 2021. Update: December 2nd, 2022 (The Berlin Spectator) — Finding the most beautiful spot in Germany is easy. Take the Autobahn to Munich. Then go south-east towards Salzburg. Do not miss the Siegsdorf exit which comes up 25 kilometers (15.5 miles) before the Austrian border. From there, follow the signs to Berchtesgaden and Königssee. Do wear some good shoes for those mountain tours. Water, sandwiches and tick repellent should be brought along. Now, all you have to do is follow the path.

So, you want to shoot the most beautiful postcard pictures of all time? And you insist on experiencing tons of beauty at one spot? Königssee is the place. People who just want to walk a little before having chocolate milk and cake with a great view can just become part of the tourist stampede. In summer, hundreds of visitors per hour will arrive at the giant parking lot just north of a village called Königssee, just like the lake itself. They will walk past all those souvenir shops and two hotels before they get to the pier.

So, they stand in line at the ticket office for half an hour. Then, one of those wooden boats with electric engines takes them to St. Bartholomew’s Church on the opposite side of the Lake of the King, or to some other crowded attraction. The biggest sightseeing spot down here is the lake itself with its surrounding. This former glacier’s water is very clean. Therefore it is crystal clear and has a beautiful color. And those mountains around it are picturesque indeed. This is the place.

One of those mountains sticks out, literally: Watzmann. It is the most impressive part of the Bavarian Alps. First of all, it looks majestic. Secondly, it outclasses everything else in the area with its height of 2,713 meters (8,901 feet). Sure, this is not Everest, but it resembles it a litte. There are Watzmann tours, but those are for well-trained pros with ropes, hooks, special shoes and a lot of determination. Well, let them do Watzmann. We decided to do tour no. 25, for advanced amateurs.

After listening to the speech held by one of the guides on the boat, and his lengthy echo test experiment which he conducted with a trumpet, we leave the crowds behind. At 10:27 a.m., the boat crew drops us off at an auxiliary stop for hikers. Apart from us, two gentlemen in their late 70s get off at this spot. Some big questions are on my mind: Who will win the race? Where are the grizzlies? What about those ticks? Are they huge and hairy? Will there be a McDonald’s up there? Should we have had cake with the stampede instead?

At 11:30 a.m., all the climbing pays off. We have a stunning view of Königssee from above. The lady at the tourist information office was absolutely right. This could be Colorado or Norway, but it is Germany. It is even getting a little cooler up here, on a rather hot day. Since I lost some 18 kilos (40 pounds) in the past months, I am doing a lot better up here than I thought I would, or than I would have with those 110 kilos (242 pounds) I used to carry around. Before the other team of two catches up with us, we continue on the uphill path.

After almost one and a half hours of climbing, at 11:53, we arrive at the first manmade object up here. Someone felt the need to build wooden stairs in the middle of nowhere. Did they help? No. But thanks anyway. During the entire climb, exactly three persons came our way. One blonde lady wanted to catch the boat down there at the lake. She seemed to be used to this, meaning she looked like she did not have to put any effort into hiking up here. Apart from her, there were two guys with big beer bellies and thick Bavarian accents.

Shortly after 12:00 noon, we reach some kind of a plateau with a billion photo opportunities. What a stunning sight! At this point, I thought the climb was over, but this obviously was wishful thinking. At this point, my energy level was down to 50 percent.

All of those flowers and the scenery made this place seem surreal somehow, at least to a Berliner, or someone who lives in any large city. The beauty, the quietude, the air and the solitude make this place very special. At 12:26 p.m., we notice that we obviously live in loud and dirty places, compared to this spot.

At about 1:00 p.m., we finally arrive at Königsbachalm, which features a restaurant for crazy hikers like us. They offer sausages up here, French fries and other snacks. The best part is that they have cold club soda too. This place is accessible by car, but only employees seem to be allowed to use the sand road with their vehicles. Everyone else comes here on foot or on electric bicycles. At Königsbachalm, several popular mountain tours meet.

Some of the people here just came down from the Jenner, a peak at an altitude of 1,874 meters (6,148 feet). We are at 1,200 meters (3,937 feet) at this point. Now, it is time to start our descent to Königssee the village, and Königssee the lake. Going downhill should be very easy, I thought. Yet again, I was wrong. The path looked easy, but I would feel the downhill hike in my legs for two days.

Then, finally, at 3:30 p.m., after five hours of hiking, we are back in civilization. I am about as impressed as I am tired, as we reach the parking lot. Tour no. 25 was definitely great. I would love to do it again, at some point.

The total number of official hiking tours around Königssee is 28. They take people to peaks, into caves, to creeks and scenic outposts. Some are for well-trained individuals, some for amateurs like me, who think they are well trained because they do some cycling in Berlin, and others for people who just want to take a walk with nice sights.

Hikers who do five tours down there will get a “hiking needle” in bronze from the tourism office. With ten tours, it is the silver needle. Gold is for pros who do 15 tours. There is a tour for everyone at Königssee. And everyone will love this place. Coming here before or after the summer vacations is probably a good idea. But for those who do real mountain tours, it does not really matter, since hardly anyone is up there anyway, even in August. They are all consuming cake at the café, remember?

The day we were there, August 11th, 2021, a tragic accident happened in the mountains. On the way down from Königsbachalm, we noticed a helicopter that was standing in the air further up. Later, we found out a mountaineer had fallen from a wall he was climbing and died.

At the parking lot, we ran into the two elderly gentlemen who had taken the same tour and who had been on the same boat in the morning. During the hike, they had caught up with us about three times. Down there in Königssee village, they looked very different in their shiny, big BMW, with their elegant sunglasses.