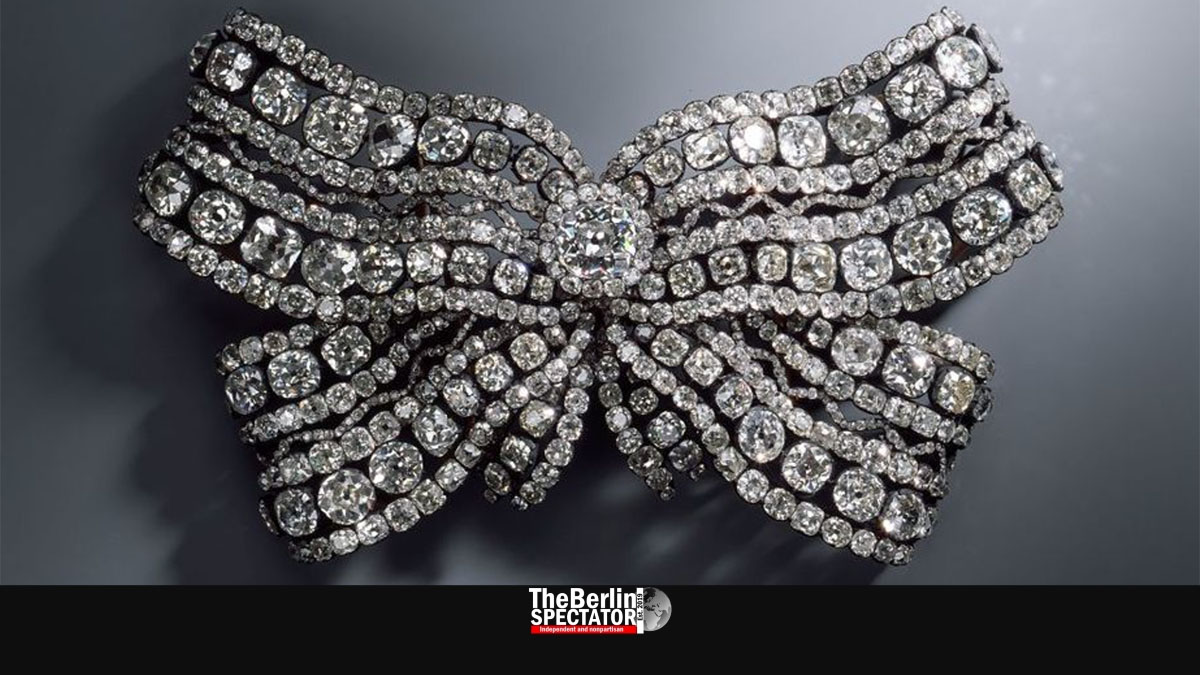 The ‘Big Chest Ribbon’ and the ‘Saxonian White’ are still missing. But, in Berlin, the police just found 31 very valuable items that were stolen from the Green Vault in Dresden in 2019. A deal between the suspected thieves and the prosecution led to this success.

Berlin, December 18th, 2022 (The Berlin Spectator) — “Diamonds are forever. They are all I need to please me. They can stimulate and tease me. They won’t leave in the night. I’ve no fear that they might desert me.” This is a song Shirley Bassey once sang for the James Bond movie ‘Diamonds Are Forever’. In the case of the loot from Dresden’s Green Vault, those diamonds actually left at night and deserted their owners. But the singer’s general statement about diamonds is accurate.

Young members of a well-known Arabic family clan are suspected of a big heist in Dresden. On November 25th, 2022, they supposedly shut down an alarm system that had been installed to protect the content of the old treasury built in the 16th century. Then, they cut a grid in front of a safety glass window before they broke the latter, entered the building and chose a specific vitrine filled with treasures. With an ax, they broke the glass cabinet, collected its content, and took off.

After the heist, a reward in the amount of 500,000 Euro (529,725 U.S. Dollars or 436,203 Pounds Sterling) was promised to anyone who would name the thieves and tell the authorities where to find the jewelry worth tens of millions. Now, the reward will not be needed anymore. In Berlin, the police found most of the stolen rings, bracelets and chains made of gold and diamonds the criminals took with them three years ago.

Six suspects are on trial, while investigations against a seventh one are ongoing. On December 20th, 2022, the court proceedings are supposed to continue. In a few weeks from now , the verdicts might be in. Before the police collected most of the loot in Berlin, there had been “exploratory talks” between the defense and the Dresden Prosecution about the return of the loot, a press statement from the Saxonian capital read. In other words: The suspects will be spared some jail time in return for the treasure. But where are the ‘Big Chest Ribbon’ (see photo at top of this page) and the ‘Saxonian White’? Only the thieves know the answer.

When the culprits stole the treasure, they knew exactly what they were doing. After the heist, they set a vehicle on fire in a garage and created a lot of damage. That is one of the reasons why the trial is about more than just stolen jewelry. After the burglary, the Green Vault was closed to the public for half a year. A year after the crime, in November of 2020, three suspects were arrested in Berlin and put behind bars. By the summer of 2021, six of them were in custody. On January 28th, 2022, the trial commenced in Dresden.

The loot was just transported back to Dresden, but not in a regular delivery van. Saxony does not intend to lose its treasure again. An elite police united escorted the transport from Berlin to its destination. Soon, visitors will have the opportunity to admire the jewelry again, at the Green Vault. Let’s hope those diamonds will remain there forever. They are all we need to please us.