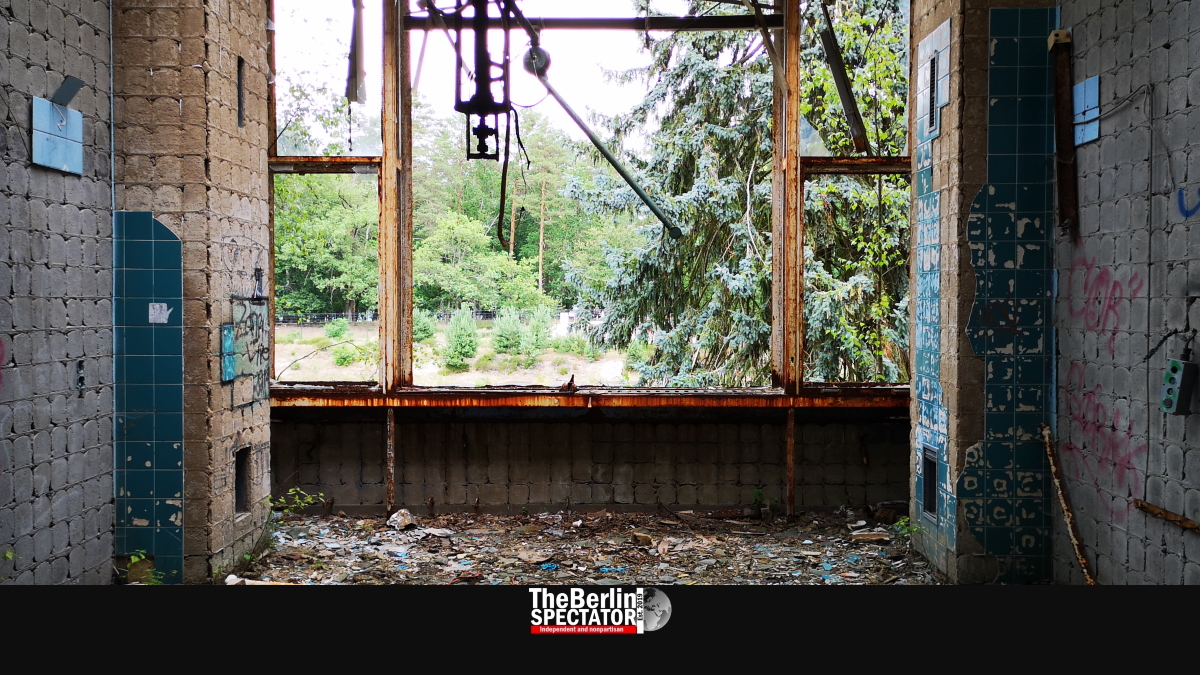 Located in Brandenburg province, in the town of Beelitz, former sanatoriums offer an intriguing view into the partially scary history of medicine. They are the spookiest tourist magnets in Germany.

Berlin, August 17th, 2020, update September 22nd, 2022 (The Berlin Spectator) — For photographers who are into scary, abandoned places, Beelitz is just the right spot. It is is Germany’s Pripyat. Luckily, the Brandenburg location is not connected to nuclear energy or radioactivity at all.

Nature and decay are taking hold of several of the old sanatoriums there. Along with traces of vandalism, these aspects give those buildings a Pripyat look. Entering those scary locations is dangerous – and forbidden. But there are official tours through the former surgery ward.

What patients went through in this building many decades ago is far more scary than anything tourists will see. In the early days, they underwent surgery without anesthesia. Later, the anesthesia available was unreliable, meaning patients would wake up during surgery, and they would have to be held in place by a bouncer-type muscle guy while they screamed because of the pain they had to endure.

The construction of the first sanatorium for lung patients in Beelitz commenced in 1898. Completed in 1930, three years before the Nazis took power, this place became one of the largest hospital complexes around Berlin. The history of the Beelitz Sanatoriums is connected to the war and its consequences.

Back then, the genders were separated. This applied to both patients and staffers. There were sanatoriums for female lung patients, for male ones, dormitories for female nurses and doctors, as well as for their male colleagues, in different buildings. In 1908, the total number of beds was doubled from 600 to 1,200.

Technically, the hospitals in Beelitz were always top-notch. In 1903, the local heat and power station already used the power-heat coupling technology. The balconies for lung patients were equipped with plugs for headphones.

In both World Wars, the Beelitz Sanatoriums were used as hospitals for wounded soldiers. Private Adolf Hitler was treated here in 1916. When Nazi Germany was defeated, in 1945, the Soviets, and later the Russians, took over the partially destroyed buildings in Beelitz. They set up their own hospital there. It was the largest Soviet military hospital outside the Soviet Union.

The Russians used Beelitz until 1994. Russian signs still show the way to surgery in the ruin. In 1990, the GDR’s former dictator Erich Honecker was treated in Beelitz for liver cancer, before he was flown to Santiago de Chile in 1993, where he met his wife Margot and died a year later.

Now, step by step, the sanatoriums are being refurbished. But there are enough decaying buildings to look at, from the inside and outside, and even from above. Beelitz is a tourist haven today. Apart from those tours through the former surgery ward, a Treetop Path lets visitors see beautiful Brandenburg forests up and close, along with decaying former hospitals.

For Berliners, getting to Beelitz by car is easy. From the German capital’s Kreuzberg district, it is a 45-minute trip without traffic, and up to twice that time with traffic jams. From the train station in Beelitz, there is a shuttle bus that takes visitors to the Treetop Path, the old surgery ward and the ‘Bare Foot Park’, an excellent location for families with children.

There is one downside: Any visit to Beelitz is a sort of costly affair. Regular tickets for the Treetop Path are 9.50 Euro Euro (12 Dollars or 10 Pounds) per person, and those for the sanatorium tour are 13.50 Euro. There is no tour through the building without Treetop Path tickets. This rule almost doubles the price for the tour. Still, any Berliner or expat Berliner should see Beelitz at least once.

Lots of motion pictures were shot in Beelitz, including ‘Valkyrie’ with Tom ‘Clear’ Cruise (‘Clear’ is a term used in his Scientology cult) and Roman Polanski’s ‘The Pianist’. A German film entitled ‘Heilstätten’ (‘Sanatoriums’) about this very place in Beelitz was supposed to be shot there too, but the owners did not agree. So the Beelitz flick was not filmed in Beelitz itself.

Their official website is a little weird. Its English version is German. It can be accessed here.

Scholz in TV Interview: ‘Putin Will Not Succeed’