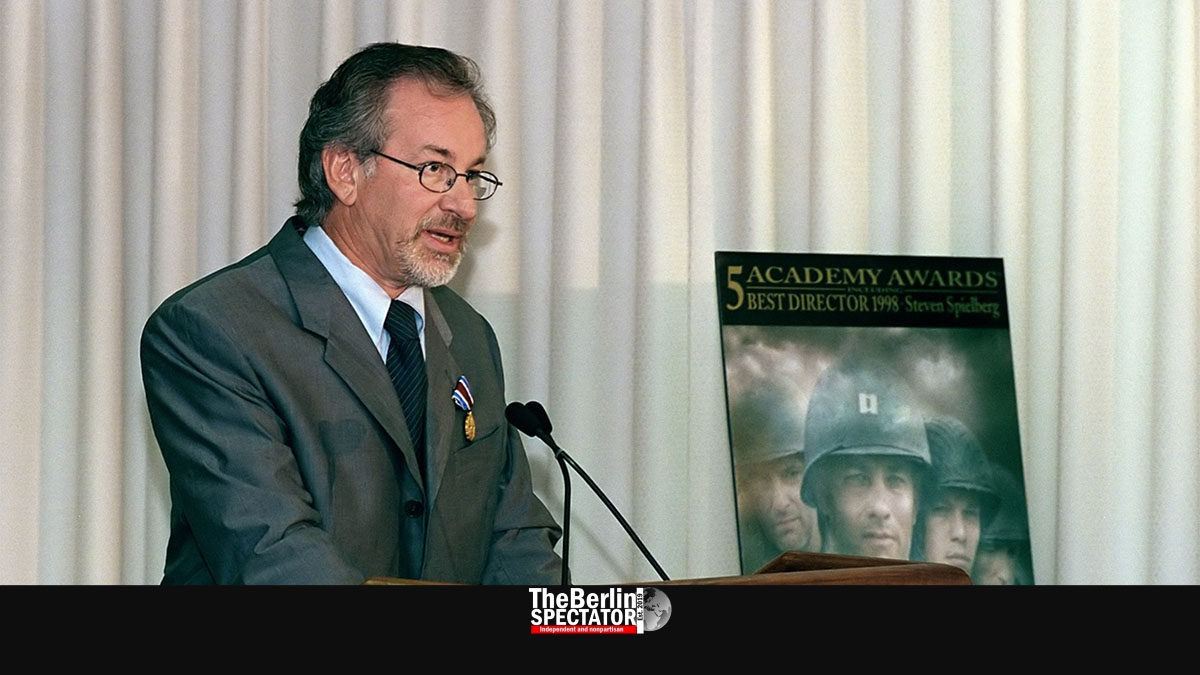 The Berlinale is not exactly known for favoring Hollywood. In this case, it will make an exception. None other than Steven Spielberg will be receiving the Honorary Golden Bear soon.

Berlin, November 23rd, 2022 (The Berlin Spectator) — While Hollywood gives out Academy Awards and Golden Globes, the German equivalent is the Golden Bear. One of them, the honorary version, will be awarded to Steven Spielberg during the 73rd edition of the Berlinale, in February of 2023. If anyone deserves all film awards available it is him. Once he holds the award in this hands, he will be 76 years old.

As a student, Steven Spielberg snuck into Hollywood studios to watch directors do their jobs. Some 50 years ago, he started directing TV series himself, including some “Columbo” episodes. In 1971, “Duel” was his first full motion picture. From this moment onward, the Jewish director kept on outperforming himself and everyone else in the business.

In “Jaws”, police chief Brody insisted on closing the beach. In “Raiders of the Lost Ark”, Indy finds all kinds of artifacts. With “The Color Purple”, he touched the far more serious story about the life of Celie Harris who is exploited and abused almost all her life. In 1993, two big and very different Spielberg movies were released, namely “Jurassic Park”, the sensational first sequel, and “Schindler’s List”, the true story about the salvation of the ‘Schindler Jews’ by a war profiteer and Nazi party member whose conscience sounds the alarm.

As we all know, the list of stunning motion pictures made by Spielberg is long. His latest project ‘The Fabelmans’, a semi-autobiographical story about a young filmmaker who has a lot in common with the director of this movie, will be screened at the award ceremony in Berlin. As the Berlinale pointed out, Steven Spielberg’s oeuvre consists of more than 100 films and series. Obviously, it is unbeatable in regard to both its quantity and quality.

Spielberg himself was nominated for Oscars 19 times and won in three cases (while his movies got a total of 140 nominations and 35 actual Academy Awards). He got many other honors and awards too, including the Presidential Medal of Freedom. In Germany, he was awarded the Grand Cross with Star of the Order of Merit for ‘Schindler’s List’ and his work with his own Shoah Foundation. The NGO records audio-visual interviews with Holocaust survivors to keep the memory alive.

“With an incredible career, Steven Spielberg has not only enchanted generations of viewers all over the world, but has also given a new meaning to the ‘cinema’ as the factory of dreams”, the Berlinale’s directors Mariette Rissenbeek and Carlo Chatrian said in a statement. “Be it in the everlasting magic world of teenagers or in the reality that history has carved forever, his movies take us to a different level, where the big screen becomes the adequate surface for our emotions to be fulfilled. If Berlinale 2023 represents a new beginning, we couldn’t find a better start than the one offered by Spielberg’s great work.”

Berlin: A Quiet Evening at the Wonderful Christmas Market at Red City Hall