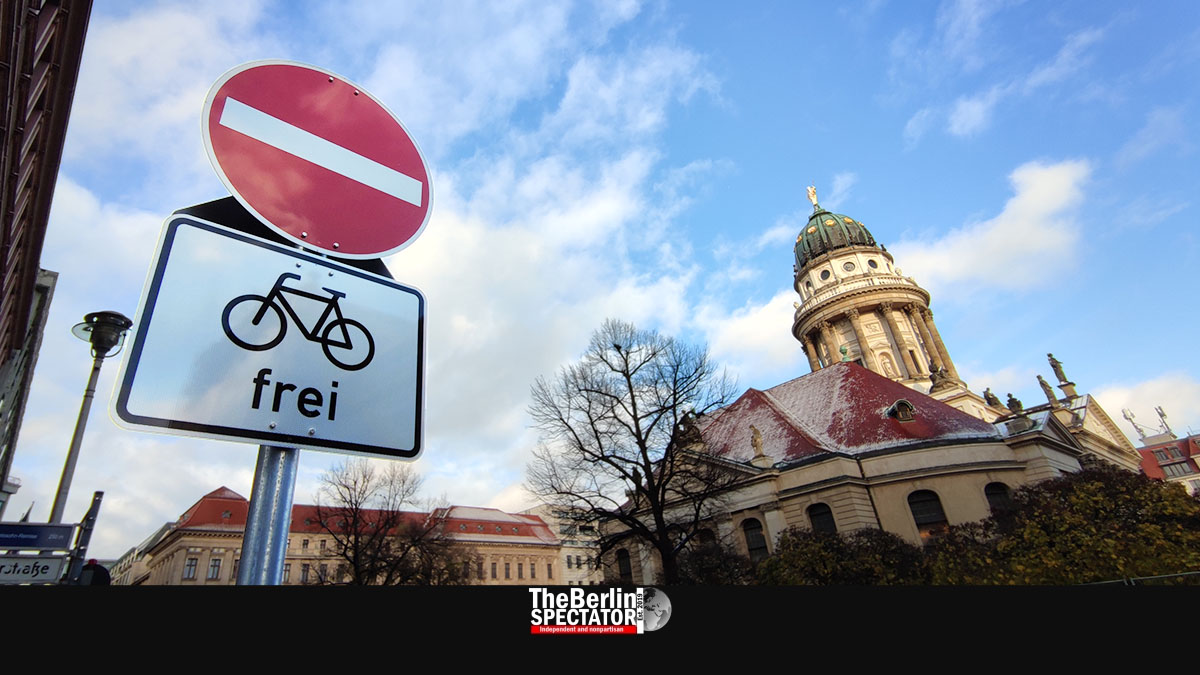 In Berlin’s Mitte district, the city state’s Green Environment and Mobility Senator Bettina Jarasch is trying everything to leave a mark on the way streets are used. Now that Friedrichstrasse is turned back into an actual street, Charlottenstrasse changed.

Until today, the conversion of regular streets into bicycle streets took place in residential areas. But Charlottenstrasse (German spelling: Charlottenstraße), is a shopping street with many offices that is being used by tourists a lot, also because it runs along Gendarmenmarkt square, one of the nicest spots in Berlin. Not all business owners on Charlottenstrasse agree with the changes.

Mrs. Jarasch’s Senate Administration also had it converted to a one-way street in opposing directions, to make things more difficult for motorized traffic, but easier for cyclists. In bicycle streets, cyclists decide how fast the traffic should move. They have priority and they may ride next to each other even when there are cars behind them. Motorists have to adapt. And only residents may enter these streets in motorized vehicles.

This measure is a reaction to the latest court decision on Friedrichstrasse, the parallel street west of Charlottenstrasse. At the same time, it is supposed to resolve an issue. Until today, a stretch of Friedrichstrasse was a pedestrian zone for one and a half years. But the few pedestrians that used it were threatened by cyclists who turned it into a race track. That is why the Greens wanted to move the bikes to Charlottenstrasse anyway.

Senator Bettina Jarasch’s plan is to convert Friedrichstrasse into a permanent pedestrian zone soon, one without bike lanes. The changes on Charlottenstrasse are part of this plan. This morning she said, the measure was being looked into from a legal perspective, in order to make sure it would not be contestable. She said she did not have a date for the changes yet.

Apart from those racing cyclists, there were other issues that kept the number of pedestrians low on Friedrichstrasse. The flower tubs and benches the Senate had set up did not really make it attractive, which is why the “car-free strolling promenade” the Berlin Greens envisioned did not convince that many people. The next attempt is supposed to be more successful. Mrs. Jarasch said more plants and benches would be part of the new pedestrian zone. It would be more attractive than last time, but, according to her, it will take until spring to set it all up.