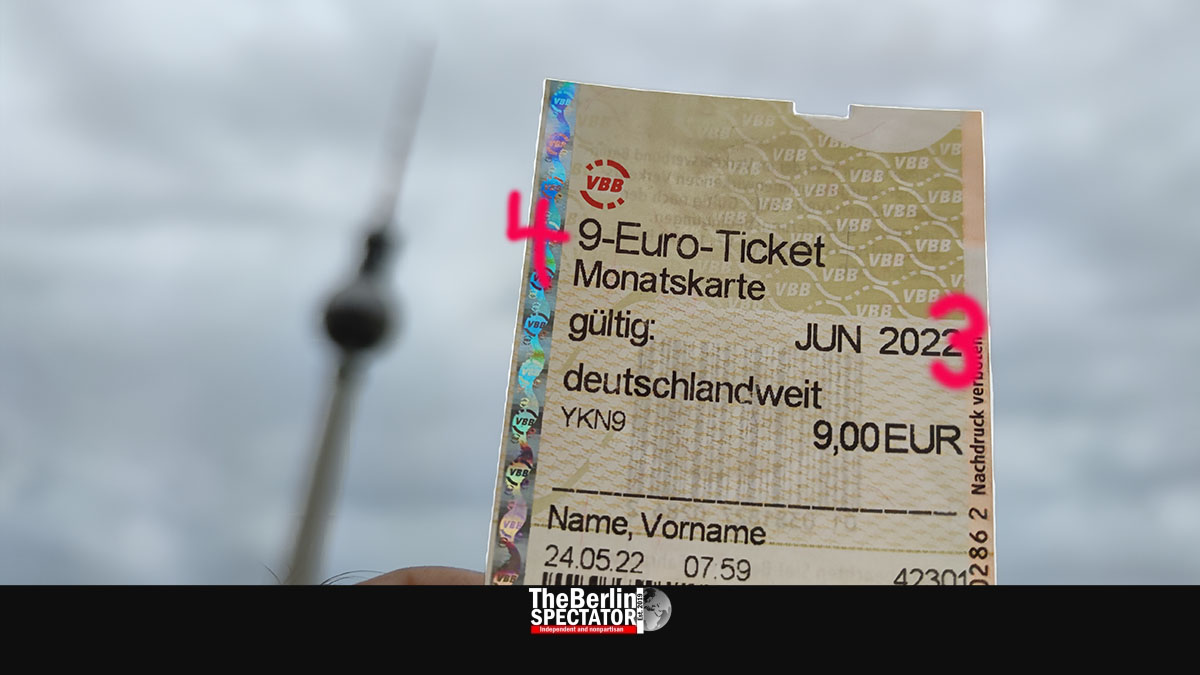 Germany can finally go ahead with its 49 Euro Ticket. After weeks of arguments, Chancellor Olaf Scholz and the heads of government from the federal states agreed to cover half the costs each. But when exactly the ticket will be offered is still unclear.

Berlin, December 9th, 2022 (The Berlin Spectator) — In a few months from now, a Germany Ticket will be available to everyone. It is supposed to be the successor of the 9 Euro Ticket which was available for three months in summer. In both cases, the purpose is (or was) to reimburse people for the high energy costs and to convince more of them of the advantages of using public transport.

There is an obvious difference too: While the 9 Euro Ticket was 9 Euro (9.52 U.S. Dollars or 7.76 Pounds Sterling), the Germany Ticket will be sold for 49 Euro (51.82 Dollars or 42.26 Pounds). But, like its predecessor, the Germany Ticket (which used to be referred to as the 49 Euro Ticket) will cover the usage of the public transport and regional trains in all of Germany. Deutsche Bahn’s IC and ICE trains are not included. Here, separate tickets need to be purchased for regular prices.

Scholz, thirteen First Ministers, two First Mayors and Berlin’s Governing Mayor Franziska Giffey finally agreed to splitting the costs in half. Earlier, the federal government had promised to pay 1.5 billion Euro (1.59 billion Dollars or 1.29 billion Pounds). The federal states had agreed to cover the other 50 percent. But, because the actual costs are expected to exceed 3 billion Euro (3.17 billion Dollars or 2.59 billion Pounds), an argument about the rest of them had developed. Now, it is resolved.

The Germany Ticket would be available very quickly, Olaf Scholz promised in Berlin. “We have eliminated all hurdles”, he said. That way, those in charge in the states and at the traffic enterprises could make sure things would go ahead now. In the meantime, Scholz’ coalition government will have to make sure the corresponding laws are passed.

So far, Berlin is the only federal state in Germany that is offering a cheap ticket to public transport passengers. The Berlin Senate and the city’s public transport providers started selling the 29 Euro Ticket in late September. It is actually a subscription, one that can be used in Berlin’s public transport zones A and B only. This morning, Franziska Giffey told RBB radio, the Senate needed to check whether the Germany Ticket and the 29 Euro Ticket could complement each other. She also said the implementation of the Germany Ticket needed to be worked on right now.

After his meeting with the First Ministers and Mayors, Olaf Scholz, commented on his government’s work, on the first anniversary of his ‘traffic light coalition’. “In a difficult situation for our country, we managed to find solutions”, the Chancellor stated. The creation of accommodations for refugees was discussed as well. So was support for small and mid-sized companies because of the high energy costs.