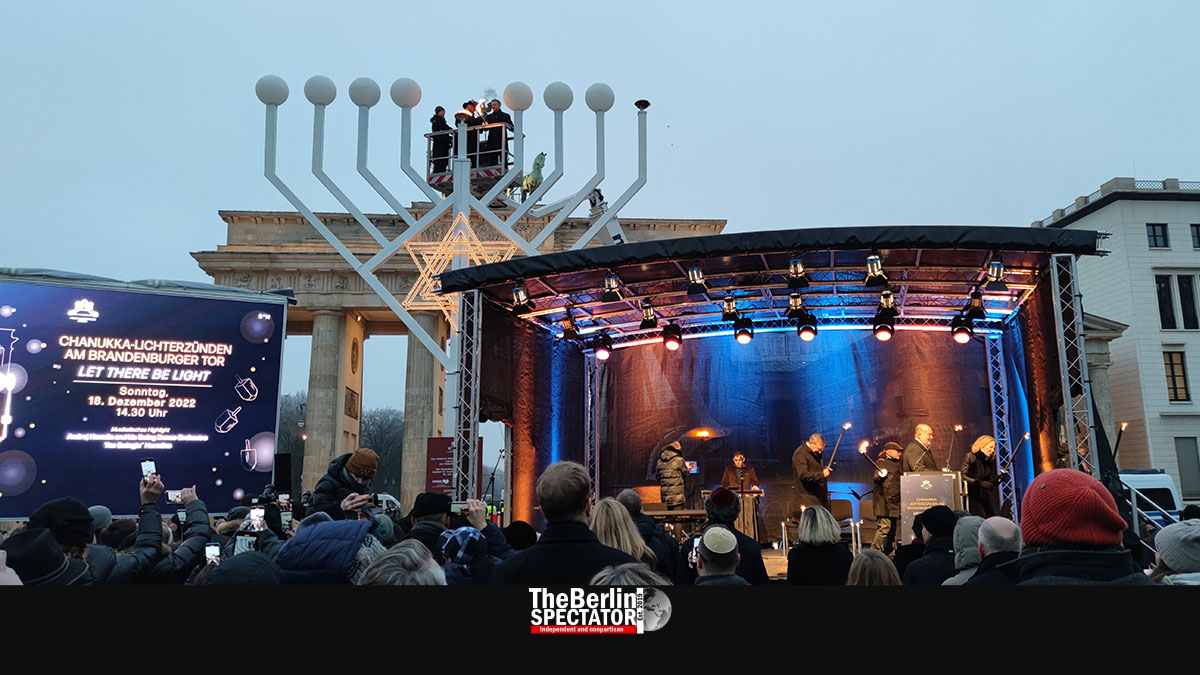 Berlin, December 18th, 2022 (The Berlin Spectator) — While Germany’s tens of millions of Christians were getting ready for Christmas on the fourth Advent, the country’s small Jewish community observed the first evening of Hanukkah. For the 17th time, the first light of the ‘big one’ was lit, a Hanukkiah (or Hanukkah Menorah) that is hard to miss. It is located between Brandenburg Gate and a rather big Christmas tree at ‘Pariser Platz’ square.

Berlin’s huge Hanukkiah is 10 meters (33 feet) high. Dozens of smaller ones were set up all over the city. At Brandenburg Gate, Jews from Berlin gathered at -6 degrees Centigrade (21 degrees Fahrenheit) this afternoon, along with non-Jewish supporters of the community.

Franziska Giffey attended the ceremony today. “The lighting of Hanukkah candles is an important sign of hope, especially during a year that was overshadowed by the war in Ukraine and its repercussions in Europe”, she stated. The Jewish holiday stood for tolerance, a peaceful togetherness, cohesion and solidarity. Like no other structure, Brandenburg Gate reflected Germany’s history. Therefore it was the most famous one in the city and just the right location for the Hanukkiah. “Today, we are making clear that Jewish life and Jewish culture are an integral part of society in Germany, including Berlin, and that we will confront any kind of antisemitism decisively”, Mrs. Giffey stressed.

Christian Lindner said the Hanukkiah symbolized light in a world which had dark parts again. He mentioned Putin’s war as well. The Russian President would not win this war against freedom, against humaneness and against life itself. Ukraine would win, Linder predicted. Hanukkah stood for orientation and confidence, and its lights “symbolize the visibility of Jewish life in our midst.” The Minister also said antisemitism, including the kind that was disguised as ‘criticism of Israel’, needed to be fought together.

Lindner joined Rabbi Yehuda Teichtal on a crane that took them to the top of the Hanukkiah, where they lit the first light. Before the lighting, Teichtal held one of his very energetic speeches. The message of Hannukah was light rather than darkness, democracy rather than tyranny, he said.

Ron Prosor, the new Israeli Ambassador to Germany, was part of the ceremony too. “The fact that the largest Hanukkiah in Europe is right here today is an important symbol”, he stated. “With Hanukkah, we celebrate the victory of the light against darkness, of good against evil.”

For the Central Council of Jews in Germany, its Vice President Abraham Lehrer said friends had come to the ceremony. Everyone got along well with everyone else. To Jews in Germany, this was not self-evident. He mentioned recent cases of Jew hatred in the Federal Republic and events that had unsettled the Jewish community, including the revelations around 25 self-proclaimed ‘citizens of the Reich’ who intended to stage a coup and were arrested eleven days ago. “That is why moments like this one are so important”, Lehrer told some 300 participants of the lighting event. It showed the will of Judaism to survive, and its resilience.