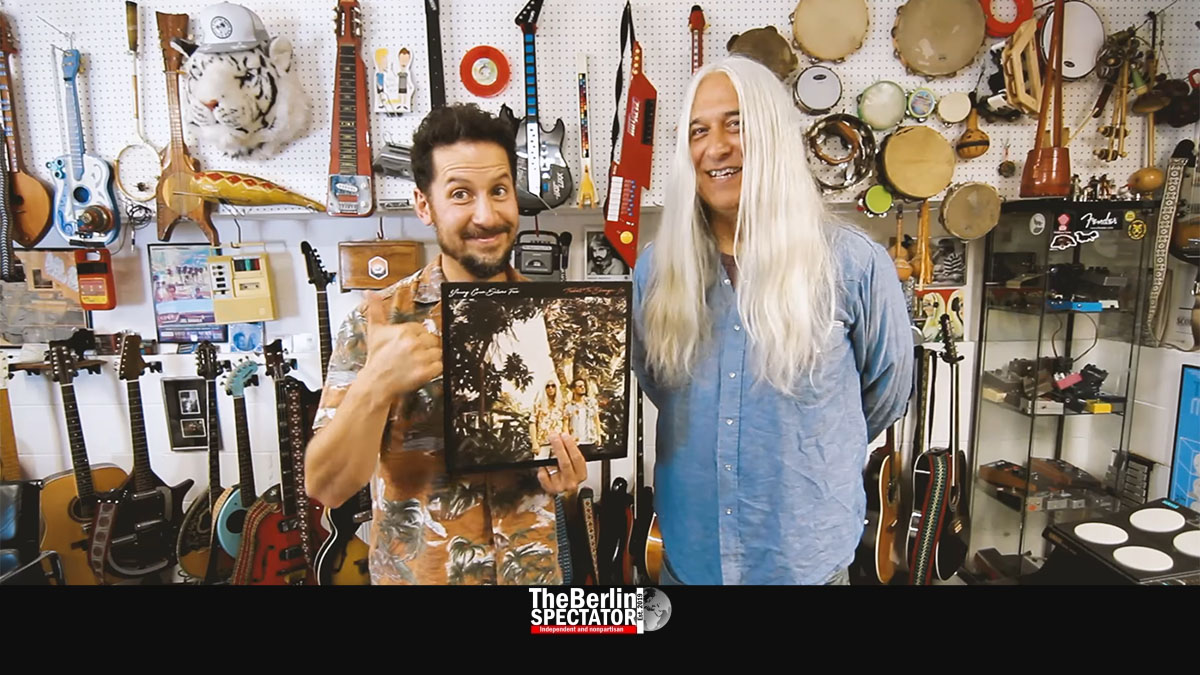 Between 1975 and 1982, stunning Pop and Rock music was recorded. Now, the sound of that era is back, thanks to a group called Young Gun Silver Fox. Guess what: They are coming to Germany.

Berlin, December 24th, 2022 (The Berlin Spectator) — Adult-Oriented Rock (AOR) was big in the late 1970s and the early 1980s. Back then, some of the most brilliant music was immortalized on vinyl. Now, high quality Pop and Rock finally returned. Listening to music by Young Gun Silver Fox makes us believe time travel is possible.

Not only did Young Gun Silver Fox just record a new album, but they will be embarking on a tour soon, one that will take them to Germany as well. They are a duet consisting of the American multi-instrumentalist Shawn Lee, Silver Fox, and the British vocalist Andy Platts, Young Gun. In the studio and on stage they cooperate with pickup musicians. Whatever they do, they stand out.

Shawn Lee, a former video game producer, is the mastermind of the project. Mama’s Gun is the name of Andy Platt’s former band in which he was the very convincing lead singer. These two men are doing the world a big favor by bringing back the quality of the 1970s to an area in which it is badly needed, namely Pop music.

‘Their first three albums ‘West End Coast’, ‘AM Waves’ and ‘Canyons’, offered exactly what some of their titles suggest: West coast sound songs like the ones played on AM radio waves in 1978, the kind of music that spread warmth, stimulate hormones and have an uplifting effect in every way imaginable. We ‘gotta’ thank these guys for the overdue return of AOR.

Now, they released ‘Ticket To Shangri​-​La’, another masterpiece. The album includes wonderful tunes including ‘Still Got It Going On’. Its intro is too good to be true. With those crisp horns and its entire approach it sounds like the late Maurice White had returned from heaven, to team up with the Phoenix Horns, the Seawind horns, Chicago and Toto. The word impressive would be an understatement here.

The best part? Young Gun Silver Fox are coming to Germany. On February 26th, 2023, they will be hitting the stage at Berlin’s legendary ‘Quasimodo’ club. Hallelujah! On February 27th, they are scheduled to ‘do’ Hamburg, before continuing on to Cologne for a gig on the 28th. Tickets for these three gigs are being offered here. There was supposed to be a tour in March of 2020, when everything went to sh*t, thanks to the Coronavirus. This time, the tour will actually happen. Well, let’s hope so.

These guys, Andy Platts and Shawn Lee of Young Gun Silver Fox, are the heirs of those great AOR pioneers. In order to get an idea of what AOR was all about four to five decades ago, listening to the following stunning examples is recommended:

Obviously, there are millions of examples.