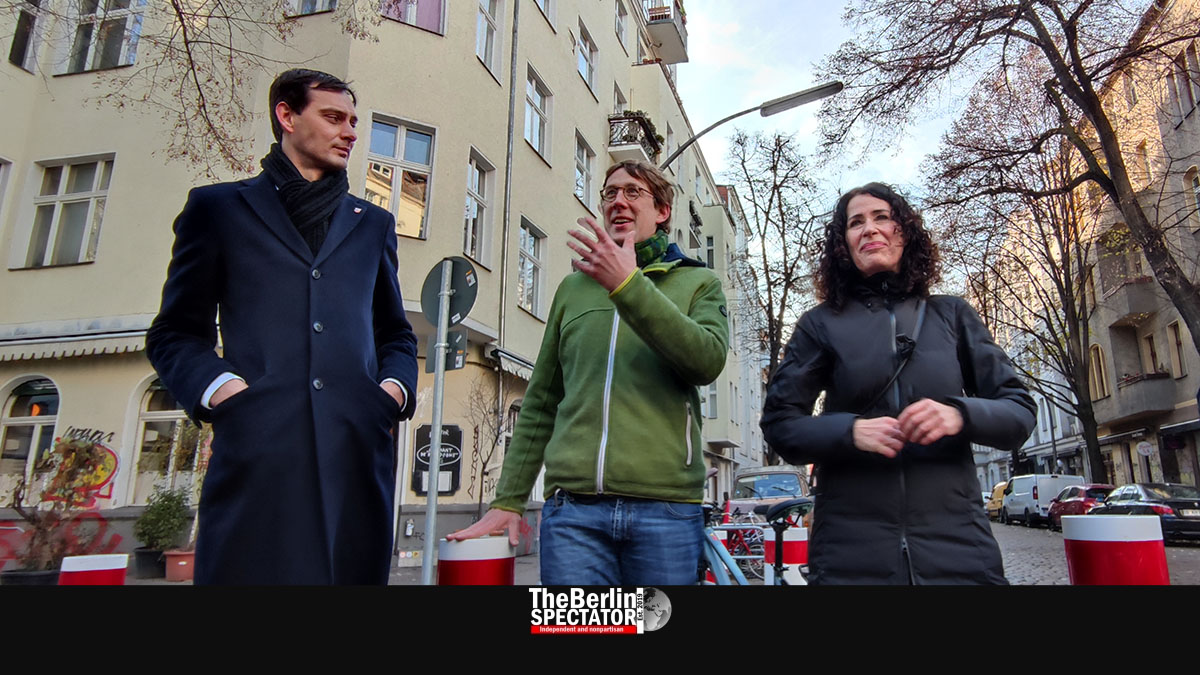 Berlin, December 12th, 2022 (The Berlin Spectator) — The Greens are outperforming themselves by converting more and more regular streets in Berlin to bicycle streets. Here, cyclists have priority and they are allowed to ride next to each other. Motorists have to adapt to their speed. Besides, only residents may enter those streets in motorized vehicles. The idea is to decrease motorized traffic.

In the case of Weserstrasse, exactly 0.495 kilometers (0.3 miles) were rededicated, the stretch between Pannierstrasse and Fuldastrasse. According to Councilman Jürgen Biedermann, it took seven years to get it all done. Many tasks had to be worked on, including all the planning, the plan approval procedure, the tender and the implementation.

Technically, there were some complicated aspects, since the old Weserstrasse had a cobblestone surface that was not compatible with bicycles. It also had very narrow 1980s bike lanes on the sidewalks. Not only did the Senate and the district have to replace the street layer, but also refurbish the sidewalks. The result would have looked nicer in spring, but the endeavor is successful.

While many residents supported the conversion, some did not, maybe because motorists have new problems on Weserstrasse. New one-way streets in opposite directions make things complicated. The next issue is the fact that the intersection of Weserstrasse and Weichselstrasse was partially closed for cars. New bollards, the Berlin Greens’ favorite weapons, were installed to decrease motorized traffic further. While cyclists can go any way they want, cars cannot. At this intersection, they can only go from the west to the south or from the north to the east.

At today’s little inauguration ceremony, between nice new bike lanes and a total of fourteen bollards, Senator Bettina Jarasch said it was important to have more room on the sidewalks as well. Pedestrians and even the trees planted there would benefit since the tree pits had been enlarged. This was important for the watering. The quality of life in the neighborhood had been improved, she stated. Bettina Jarasch is hoping to become Governing Mayor soon, after the state election rerun in February.

District Mayor Martin Hikel, the only Social Democrat at the ceremony, said it had been important to route the bicycle traffic away from nearby Sonnenallee because it was not safe there. Indeed, Sonnenallee, a major traffic artery in Neukölln, is a mess. Constant traffic jams, countless delivery vans, many buses and pedestrians who cross the street all the time create a mess. So do bad drivers. Weserstrasse is far more quiet, even more so since the conversion.