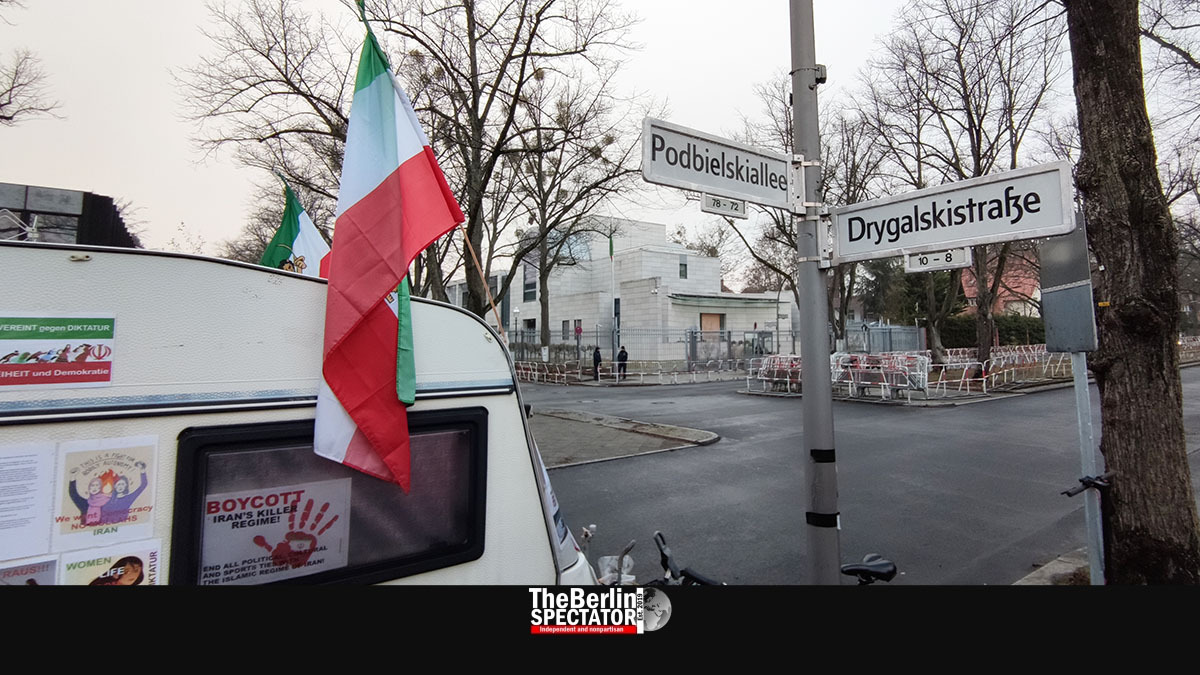 Ahead of Human Rights Day, which is observed today, Governing Mayor Franziska Giffey declared Berlin’s solidarity with those who are demonstrating for freedom in Iran. On Tuesday, their motto “woman, life freedom” will be projected onto Brandenburg Gate.

Berlin, December 10th, 2022 (The Berlin Spectator) — On Friday afternoon, a day after a young man was executed by the Iranian regime for taking part in a protest and injuring a member of a paramilitary group, the area around the Iranian Embassy in Berlin’s Steglitz borough was quiet (see photo above). A police officer said there had been two protests, including a spontaneous one, when the news had been reported on Thursday.

Across the street from the Embassy, two Iranian exiles have been living in a caravan covered with the photos of victims of the Tehran regime for two months. These protesters were attacked a few weeks ago. But the police are usually close by. Officers are guarding the Embassy 24 hours per day. While they are part of the guard service, their colleagues from the regular Berlin Police come along on a regular basis, to check whether everything is o.k..

In Iran, the country that runs the Embassy in this posh Berlin neighborhood, nothing is o.k.. The oppression of women, the brutality of the ‘morality police’ and the death of Mahsa Amini, a young woman who had been accused of not wearing her hijab properly, in police custody triggered the protests. Now, the authorities hunt down those who take part in protests against the evil regime which also keeps on threatening Israel on a regular basis. On top of it all, it is behind terror campaigns against the Jewish state and elsewhere in the Middle East.

On the occasion of Human Rights Day, Berlin’s Governing Mayor Franziska Giffey declared solidarity with the “incredibly courageous men and women in Iran who stand up for human rights, women’s rights and freedom.” Berlin would set a visible example for this solidarity by illuminating Brandenburg Gate accordingly on Tuesday evening.

After the latest execution in Iran, the Foreign Ministry in Berlin had summoned the Iranian Ambassador to Germany to hand over a protest note to him. Foreign Minister Annalena Baerbock accused the Tehran regime of “contempt for mankind”. Mohsen Shakeri, the young protester, had been sentenced in a quick trial because his opinion had differed from that of the regime. Annalena Baerbock said Iran was using executions as an instrument of terror. Hundreds to thousands of protesters were arrested. She also announced the European Union would react with tough measures.

On the eve of Human Rights Day, Governing Mayor Franziska Giffey also mentioned Ukraine. The Russian war of aggression against the country showed that human rights were abused all the time. “On a daily basis, we work to ensure that the value of every human being is respected and that people’s dignity is not violated”, Mrs. Giffey said.