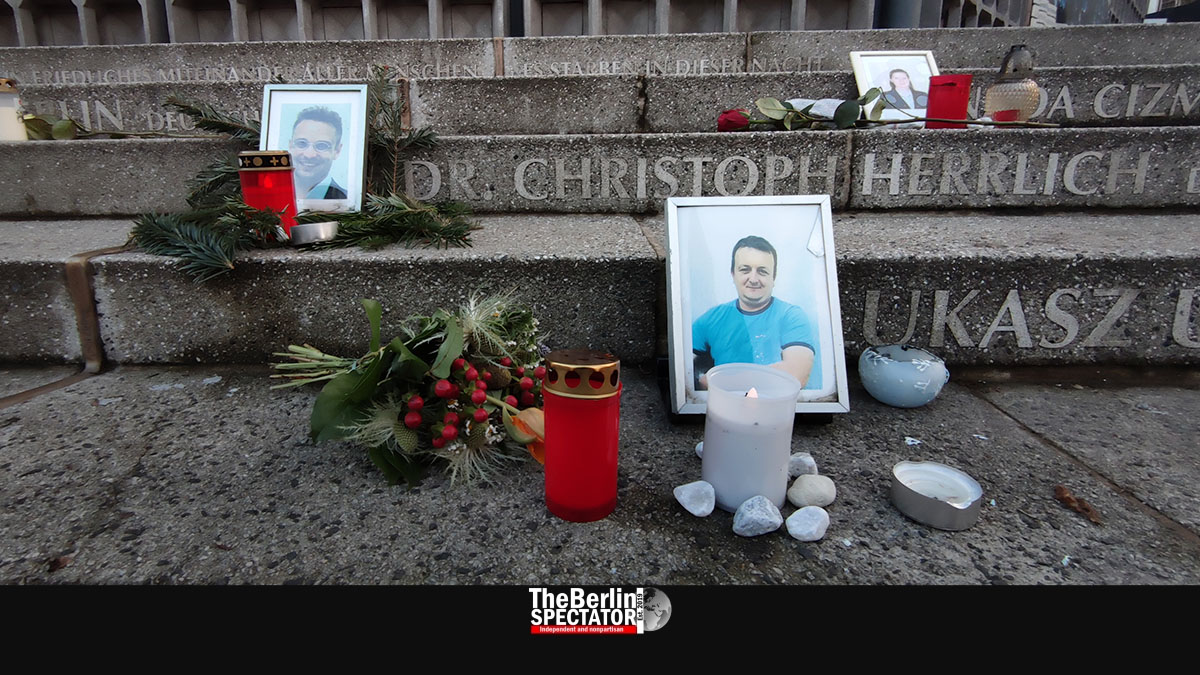 Six years ago, the Islamist Anis Amri murdered thirteen people, in a terror attack at one of Berlin’s main Christmas markets. Before and after the crime, the German authorities kept on failing.

Berlin, December 19th, 2019. Update: December 19th, 2022 (The Berlin Spectator) —  In 2014, Nada Cizmar from Czechia left her son and husband in Dresden and moved to Berlin. Whether she would have returned to her family later is a question that will never be answered because she was murdered when she visited the Christmas market at ‘Breitscheidplatz’ square on the day of the terror attack, December 19th, 2016.

She was 34 years old when she was run over by a huge truck stolen and driven by the Islamist terrorist Anis Amri. He should not have had the opportunity to murder anyone that day, because the authorities could have known he was a threat, a living time bomb, had they done their homework. But warnings were ignored.

The other victims were Anna and Georgiy Bagratuni, Sebastian Berlin, Fabrizia Di Lorenzo, Dalia Elyakim, Christoph Herrlich, Klaus Jacob, Angelika Klösters, Dorit Krebs, Peter Völker, Sascha Hüsges and Lukasz Urban. Urban, a Polish citizen, was the official driver of the truck. Amri shot him before the attack. The other casualties were Christmas market visitors from Germany, Ukraine, Israel and Italy.

It was not the first time the authorities failed in connection with a terror attack in Germany. There is a pattern. These are some cases:

There have also been cases in which the German authorities successfully ended terrorist activity or thwarted attacks. For instance, they freed all hostages from a Lufthansa jet hijacked by Palestinian terrorists in 1977, except its pilot Jürgen Schumann. He was murdered on the aircraft before the elite police unit GSG9 could become active. The GSG9 was founded because of the failures in Munich in 1972.

At the Christmas market at ‘Breitscheidplatz’ in Berlin, as many as 70 people were injured in Amri’s attack. Some of them still need care today, six years after the crime. One victim, Sascha Hüsges, who was hurt badly when he tried to help others escape the truck on that terrible day, died as a result of his injuries nearly five years later, on October 26th, 2021.

What police officers and other helpers saw at the scene on December 19th, 2016, led to traumas. Ninety-two individuals needed to be treated. On the day of the attack, Anis Amei approached the truck at a parking lot and shot the driver. Then, he drove the heavy vehicle to ‘Breitscheidplatz’ where he circled the crowded Christmas market several times while he was communicating with his friends from the Islamic State. Finally, he drove the truck straight into the crowd on the market.

Anis Amri fled the scene. At 8:02 p.m., the first call reached Berlin’s police department. Soon, a suspect was arrested but released again because he had nothing to do with the terror act. In the meantime, Anis Amri left Germany and went to Italy via the Netherlands and France.

But those in charge came to the conclusion he was just a criminal who was in the process of turning away from jihadism. That is why they refrained from arresting him. Data extracted from Amri’s phone showed he went to that same Christmas market several times before he launched his terror attack. And he spoke to an Islamic State contact more than once.

On the day after the attack, the German police asked witnesses for help, once they had noticed they had arrested the wrong man. For far too long, police assumed they had the right guy. This aspect had ramifications and did not exactly help the investigation. The authorities could have found out a lot more during the first hours after the crime.

They did not follow their own guidelines for cases like this terror attack when they assumed the culprit was behind bars. Maybe the authorities should have questioned known Islamists in the city in order to extract information about Amri. The investigation on site was not conducted the way it should have been.

A suspension of deportation document that contained the terrorist’s name was found in the truck he used as a weapon, a day after the attack. By that time, Amri had already left the country. In spite of the document they finally had found, the German authorities said it did not prove Amri had anything to do with the bloodbath at the Christmas market. This assumption is one of the weirdest aspects of them all.

Three weeks after the terror attack, Germany’s Minister of Justice Heiko Maas, who became Foreign Minister later, admitted mistakes had been made. A special investigator commissioned by the Berlin Senate came up with a report in late 2017, in which he listed several failures. A board of inquiry at the Berlin Bundestag looked into the matter. Last year, it came up with a 1,873-page report. The board came to the conclusion that misjudgement and other failures kept the authorities from stopping Amri before the terror attack.

In the first years after the attack, before Corona hit, the same Christmas market at Breitscheidplatz in Berlin’s Charlottenburg borough was crowded. Most visitors did not even notice the small memorial for the victims, located on the stairs in front of Kaiser Wilhelm Memorial Church. People were in Christmas mode, drinking hot wine punch and walking across the market with all its lights and stalls. In 2020, there was no Christmas market due to the Corona pandemic. In 2021, it was back. This year, 2022, it is as crowded as it was in pre-Corona times.

Around the Christmas market, anti-terror bollards are supposed to prevent another attack of this kind from happening there. But what about all other crowded places in Berlin?

Ahead of the sixth anniversary, Berlin’s Governing Mayor Franziska Giffey said the terror attack in 2016 had shocked Berlin to the core. Six years ago, an exuberant and peaceful mood at the Christmas market at Breitscheidplatz had turned into death and devastation within seconds. “We commemorate the 13 decreased and those who were injured in the attack.” Mrs. Giffey stated anyone could have been hit. Berlin would never forget that day. “We are mourning with the victims and their next of kin”, she said.

Germany’s Interior Minister Nancy Faeser said the fight against Islamist extremism still needed to be fought persistently because it was still a threat. December 19th was a day of shame because the needs of the victims’ families had been ignored for too long and due to the fact that the authorities had not been able to prevent the attack from happening. It was also a day of mourning for those who had been killed and people who had been. She mentioned those who were hurt physically and individuals “whose souls” had been affected.

Today, on December 19th, 2022, a memorial service was going to take place at Memorial Church located only a few steps from the location of the attack. Afterwards, the names of the victims will be read at a little shrine with photos of some of the victims, right there at Breitscheidplatz.