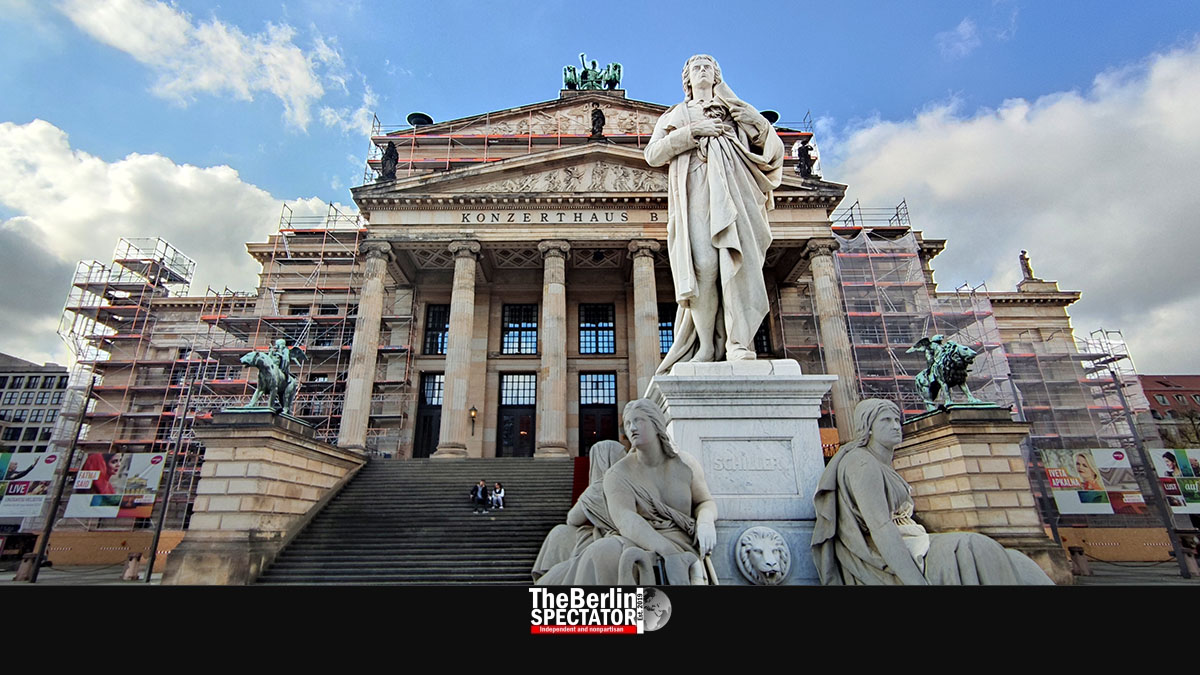 At Gendarmenmarkt, the past has passed. Now, in the present, the square will be renovated and prepared for the future. The endeavor will take two years to complete and cost a big pile of money.

Berlin, October 16th, 2022 (The Berlin Spectator) — Berlin has quite a few most beautiful spots. The most beautiful spot among those most beautiful spots is Gendarmenmarkt. At least it was, until the city started preparing it for a major renovation earlier this week. The square needs new head gaskets and brake disks. One of Berlin’s most important síghtseeing spots is turning into a chaos full of scaffoldings and construction site fences.

What are tourist guides supposed to say until the renovation is completed in 2024? “Do you see the construction site on your right? This mess is Berlin’s most beautiful location. Before they messed it up, it was really neat. Well, let’s get out of here quickly and go to Brandenburg Gate instead.”

The state-owned company Grün Berlin is responsible for the makeover. “As a state-owned company, we create sustainable infrastructures for Berlin that promote climate protection and resilience, economic performance and social cohesion”, its website reads. This politically correct, Gluten-free approach will now be taken at Gendarmenmarkt.

In 1688, a square known as Lindenmarkt was created at the location. Some 85 years later, the whole thing was reconstructed. In the 18th century, the cuirassier regiment Gens d’Armes, which the square was named after later, had stables right there. Architecture is the most important word at Gendarmenmarkt. Here, the Konzerthaus would be quite a sight if the scaffolding around it had not changed it for the worse. Flanked by the German Church and the French Church, which look the same and give the square an interesting symmetry, the concert hall used to be a theater.

Gendarmenmarkt also includes the nice structures around its center. Some of those actually are prefab buildings erected by the communist GDR, even though they do not really look that way. Friedrich Schiller got the best spot of them all. A monument for the playwright and poet dominates the Konzerthaus. It was inaugurated in 1871.

During the renovation process, the preparation for which just commenced, an underground rainwater reservoir will be built. When it rains, the water is supposed to flow right into it. From there, it will rinse into the groundwater slowly. The installation of three kilometers (1.7 miles) of cables is part of the job too. First of all, the old ones need replacement. Secondly, new sockets hidden under the square’s surface will make things easier for technicians when outdoor events take place.

All quarry tiles those hordes of tourists and concertgoers walk on are supposed to be replaced too. Twenty-seven drinking water connections all over Gendarmenmarkt are on the list. So is a general improvement of the sojourn quality and accessibility at this spot. Awesome.

One of the problems Berlin has is the fact that WWII bombs are found whenever someone starts digging holes. That is why Grün Berlin is checking the entire square for explosives beforehand. They call this process “weapons investigations”. According to the company, it includes aerial photography, drillings, excavations and abrasions. Sure, the renovation has quite a price tag. Some 20 million Euro (19.4 million U.S. Dollars or 17.4 million Pounds Sterling) will have to be wire-transferred.