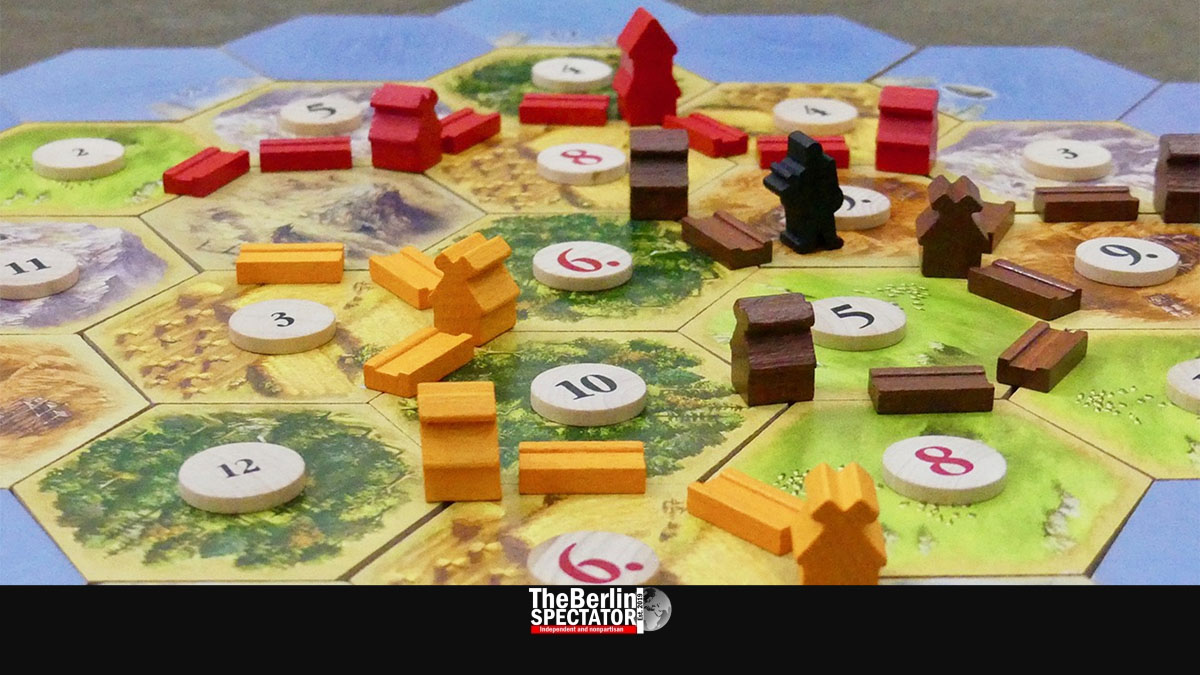 Germany is a board game country. For many decades, the Germans have been fascinated by a wide range of board games many of which they invented. Publishers also export their games to many countries.

Berlin, February 21st, 2022 (The Berlin Spectator) — People around the world rely on the ‘Made in Germany’ label when they purchase vehicles, cuckoo clocks, cheese, ice cream or machines. The same applies to board games. Board game nights would not be as enjoyable as they are if the Germans had not invented truckloads of those products.

In the information age, in which far too many people stare at far too many screens and spend their time playing far too many computer games on their own all the time, the board game has not disappeared. The opposite is the case. In Germany, the board game business is big. There is even a board game trade fair called ‘Internationale Spieltage’ which takes place in the city of Essen on an annual basis. It is the largest fair of its kind in the world. At the event, visitors view, play and purchase games.

The board game can be a lot more than just a time killer. It brings people together, as long as they are ready to leave their smart phones in their pockets for a while. It gives families the quality time they want and need. And it even educates. Children who play the right board games will learn to read better than others, they will acquire organizational skills and learn about many things including ecology or the economy.

Of course, Germans do not just play board games that were developed in their own country. ‘Monopoly’ was invented in the United States in 1904 and published in 1933. A German version was offered in fascist Nazi Germany in 1938, and later in the democratic Federal Republic, in the early 1950s. It is still being sold a lot. ‘Risk’, a big board game hit of the 1980s, was invented by the French film director Albert Lamorisse. ‘Scrabble’ is an American invention. So is ‘Pandemic’ by the American game designer Matt Leacock. He invented it in 2008. How in the hell did he know?

These are ten of the greatest or most successful German board games. Ready? Here we go:

This game the title of which could be translated as ‘Hey, Do Not Get Angry’, was a bestseller for decades. Everyone has four tokens which need to walk across the finish line. The problem is that your opponents will send them back home, depending on the number the dice shows, meaning you will have to start from scratch all the time. Just make sure you do not suffer a heart attack.

Werner Schöppner invented ‘Malefitz’ in 1959. It is similar to ‘Mensch ärgere dich nicht’, except the tokens can also be blocked by stones. It takes ages to move them out of the way. This one was very popular in the 1960s and 1970s in West Germany. As ‘Barricade’ and ‘Obstruction’, it was exported to many countries around the world.

‘Deutschlandreise’, a game in which the players take imaginary trips through Germany, was released by Ravensburger in 1962. Later, the versions ‘Europareise’ and ‘Weltreise’ were added. In all three games, children learned about the geography of Germany, Europe and the world. It was another great idea and bestseller.

In ‘Scotland Yard’, Mr. X, the bad guy, has to make sure the police in London do not catch him. On the other hand, the police officers who move around on the board have to do everything to put the man behind bars. This game for two to six players was developed by six Germans and released by Ravensburger in 1983. It sold like warm bagels. In 1983, it became Game of the Year. And it was exported.

Many board games are played on boards, which is why they are called board games in the first place. In the case of ‘Carcassonne’, which was published by Hans im Glück Verlag in the year 2000, the board grows during the game. This game is about collecting pastures, roads, towns and monasteries in the Middle Ages. In 2001, this one was honored as Game of the Year.

Steffen Bogen developed ‘Camel Up’, in which the players are supposed to bet on camels in a race. Since the animals sometimes carry each other, even the camel that lags behind can win in the end. This one was released in 2014 and became Game of the Year in both Germany (‘Spiel des Jahres’) and Spain (‘Juego del año’).

Collecting treasures is the task in this good game for children from 8 years of age. What sounds easy is actually a challenge because the ‘Labyrinth’ has moving parts that change the whole thing all the time. Introduced in 1986, this one was, and still is, very popular.

‘Azul’ is the youngest game on this list. Its developer Michael Kiesling definitely had a good idea here. The players have to add colorful tiles to a Portuguese palace. The more tiles of one color a player has, the more points she or he collects. This one is suitable for children from 8 years of age, and adults.

In the 1980s, Wolfgang Kramer came up with a genius idea. He is the developer of ‘Auf Achse’ (‘On the Road’) which is all about freight. With your truck, you are supposed to get merchandise from A to B, from B to C and all over the place. If you are a gifted entrepreneur, you will win. This German board game was drowned in awards, just like many others on this list.

1: The Settlers of Catan

The German citizen Klaus Teuber developed the idea of the 20th century in 1995. ‘The Settlers of Catan’ quickly became the second-most successful board game (behind ‘Monopoly’) in 1995. Hey! How much ore, wood and brick can you collect? Apparently a whole lot. Collecting resources is what this game is all about. Far more than 20 million copies have been sold in many countries. Especially when it was still new, people would spend their entire weekend playing ‘The Settlers of Catan’. They probably called in sick in order to be able to continue on Monday. There are quite a few versions, including one for two players which consists of cards only. We have three words for you: ‘Catan’, ‘Catan’, ‘Catan’!

The Berlin Spectator needs your support. We have tens of thousands of readers per month, but only a few regular supporters. You can donate via Paypal or Patreon. Thank you very much.
Following The Berlin Spectator is easy. You can do so on the most popular social media websites or, even better, by subscribing to its newsletter.

Germany: Number of Corona Patients at Hospitals Still on the Rise