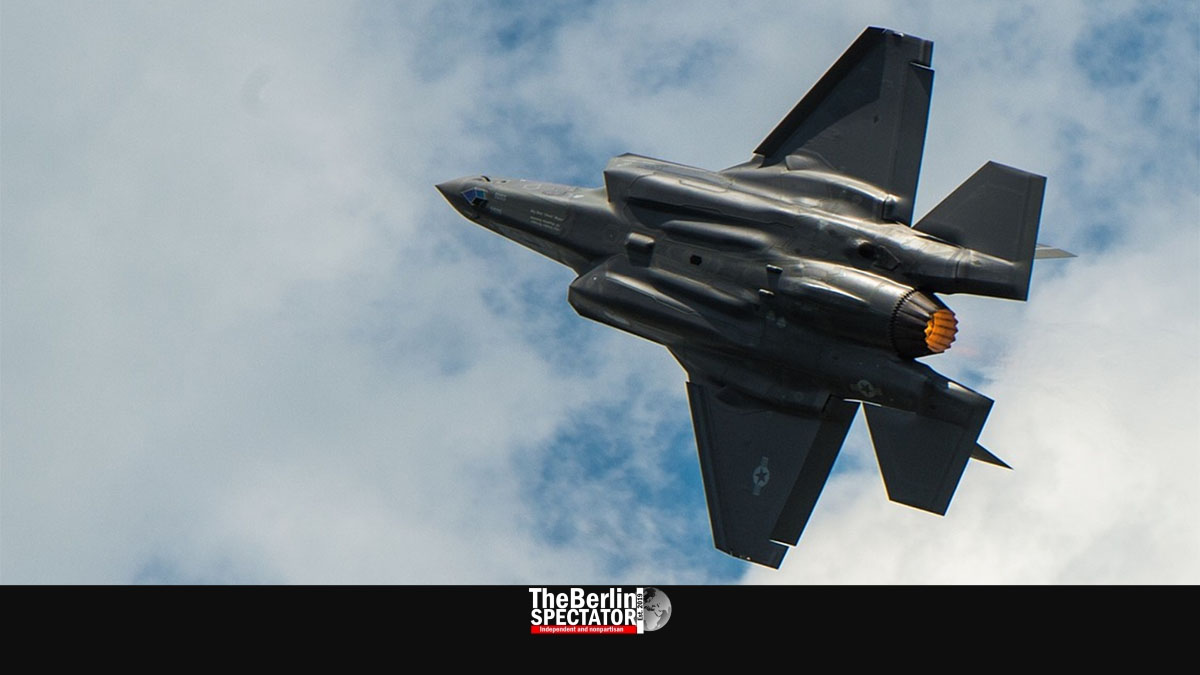 Germany is arming its Air Force. In Berlin, the Bundestag’s appropriations committee OK’d the purchase of an entire fleet of Lockheed Martin F-35 jets. The acquisition will increase Germany’s military strength substantially, at a critical time.

Berlin, December 15th, 2022 (The Berlin Spectator) — February 20th, 2022, was the day that changed everything. Russia attacked its neighbor Ukraine for the second time. Europe’s blueprint for lasting peace became obsolete, at least in part. In the case of Vladimir Putin, decades of diplomacy did not help. Military might is required now, as a deterrent. Nobody, maybe except for both far-left and far-right extremists, wants Putin in his backyard.

Its aging Tornado aircraft will not get the Luftwaffe anywhere, which is why the federal government recently allocated 100 billion Euro (106.56 billion U.S. Dollars or 85.98 Pounds Sterling) to arming the Bundeswehr, Germany’s armed forces, properly. The purchase of 35 times 35, meaning thirty-five Lockheed Martin F-35 stealth multirole combat aircraft, is part of the deal. This acquisition in the United States of America will eat up 10 percent of those 100 billion Euro.

Compared to the 2,456 F-35s the U.S. intends to purchase until 2044, the number Germany will buy looks like a joke. Still, even three dozen F-35 aircraft make a big difference. The Federal Republic wants to honor its commitment with NATO and do its part in regard to the nuclear sharing strategy. Becoming a reliable military partner is one of the goals. The times of arguments about military spending with America are over. On Wednesday, the Bundestag’s appropriations committee confirmed the purchase.

Obviously, the F-35 features an unmatched firepower. Besides, it can do everything, including reconnaissance flights, fighting other aircraft in the skies and deploying all kinds of weapons. On top of it all, the F-35 will be enabled to carry nuclear weapons after a planned upgrade in 2024. Deterrence has not been more important since the Cold War ended in 1990.

“We welcome the German government’s decision to purchase 35 F-35 aircraft”, the American Ambassador to Germany Amy Gutmann said. “The America-German defense relationship has never been stronger, and is a key pillar of NATO’s transatlantic partnership.”

According to Germany’s Defense Minister Christine Lambrecht, the decision to buy the Lockheed Martin F-35 is “a very important sign”. She also said the approval of the required funds had taken only nine months. That way, she defended her Ministry of Defense against criticism. Germany’s main opposition party, the conservative CDU, played along, also because it remembers that its own Defense Ministers did not modernize the Bundeswehr the way they should have because they did not get the required funds.

Not everyone is happy though. For the far-left ‘Die Linke’, its icon Gregor Gysi said Chancellor Olaf Scholz’s ‘traffic light coalition’ had made a grave mistake. “In case an American nuclear bomb is ever used from Germany, the response will not reach the U.S., but Germany.” Gysi called for “solutions to conflicts” instead of “military solutions”.

It will take some time until those thirty-five F-35s are airborne. In 2026, the first German Air Force pilots are supposed to be trained in the United States. The first F-35s will be delivered in 2027 in order to be operational in 2028.