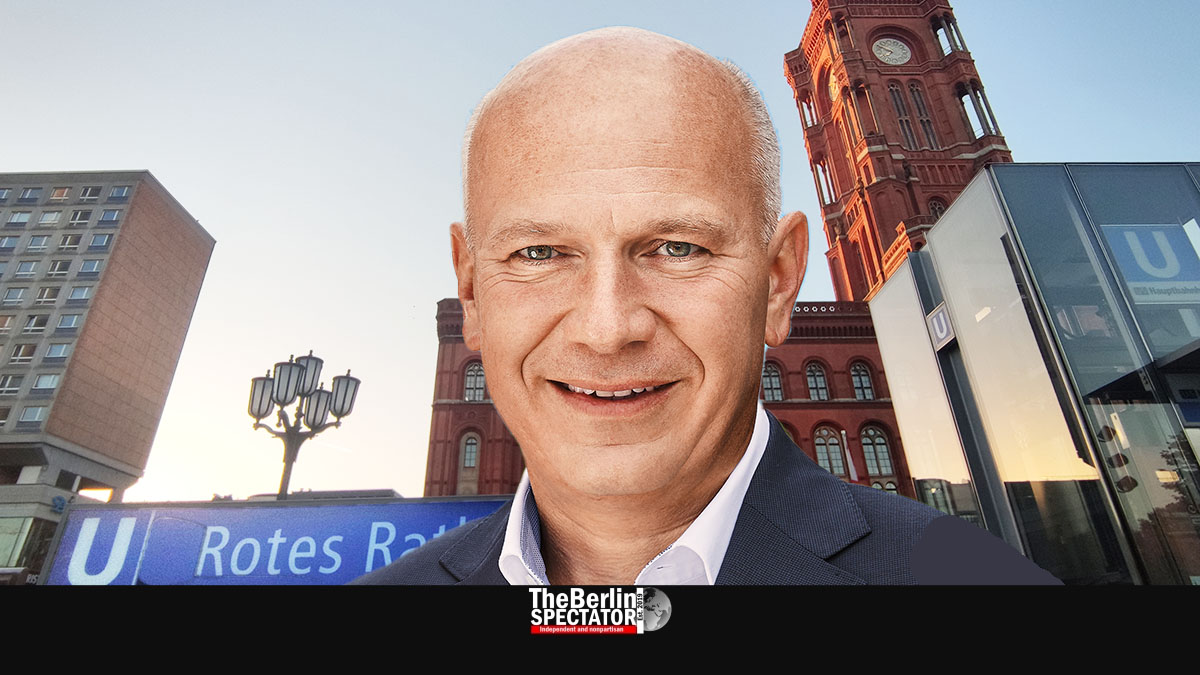 Berlin’s state elections will be repeated soon. Shortly before Christmas, the parties are in the process of switching back into campaign mode. Kai Wegner of the conservative CDU could win the elections. But, if he does, will he actually be in the position to take over Red City Hall?

Berlin, December 12th, 2022 (The Berlin Spectator) — In the city state of Berlin, Kai Wegner has a chance. He could become the first Governing Mayor of his Christian Democratic Party (CDU) since Eberhard Diepgen was unelected in a vote of no confidence at the Berlin House of Representatives 2001 because of a scandal surrounding the state-owned Bankgesellschaft Berlin, which collapsed economically and increased the city state’s debt substantially.

Only a few months ago, Wegner ran an election campaign that ended with a third place for his CDU, eleven days after his 50th birthday. Because of irregularities on Super Sunday in September of last year, the state elections are supposed to be repeated in February. Kai Wegner sees an opportunity here. The polls prove him right. According to the very latest one, which was conducted by Civey for the ‘Tagesspiegel’ daily, the CDU could become the strongest party this time, with 25 percent, while the governing Social Democrats could end up with only 18. Even the Greens might receive more votes than the SPD. In this most recent poll, they got 21 percent.

On a webpage entitled ‘Mein Berlin’, the CDU profiles its main candidate Kai Wegner with three photographs. On the first one, he is having a beverage with a multicultural bunch of Berliners at one of the city’s parks. This shot is supposed to show that Wegner is a good guy without pretension, a man people can talk to. The second photo shows him with police officers, which is not a coincidence either. Law and order is one of his party’s trade marks. The CDU sees room for improvement in this regard, especially in Berlin.

The third and last picture shows Kai Wegner standing between a motorist and a cyclist. Obviously, this photo is another signal to the voters. It says Wegner will end the Green anti-car policies, but “create mobility offers that will satisfy the needs of all Berliners”. This is what it says next to the photo. People are supposed to get through the city quickly and safely, no matter whether they walk, cycle, go by car or by public transport.

According to Kai Wegner and the CDU, Berlin needs a “fresh start”. The “magnificent metropolis” had a lot of potential, but it was underperforming, the conservatives say. Wegner and his people would “make sure Berlin functions again”. They promise “pragmatic solutions for everyone” and a usage of the city’s full potential.

Things are looking good for Kai Wegner, at least in the polls. But there are problems too. Those might keep him from ever moving into Red City Hall. First of all, he would need at least one coalition partner. The Free Democrats (FDP) are too weak, and they might not even make it into the Berlin House of Representatives with those 5 percent the latest poll gives them. Neither the far-left ‘Die Linke’ nor the extremist right-wing AfD are potential partners. Besides, they are weak too.

Imagining a coalition involving the CDU and the SPD as its junior partner is difficult. First of all, the math might rule out this constellation. Secondly, the Social Democrats would probably not want to become Mr. Wegner’s junior partner, even without today’s Governing Mayor Franziska Giffey. One potential coalition partner is left, namely the Greens. But they are a tough one too, also because the differences are too big, in the traffic policy and other areas.

There is another challenge for Kai Wegner: Winning the polls is not the same as winning the elections. He and the Greens learned this fact the hard way last September, when the SPD’s Franziska Giffey managed to turn the tide at the last moment. In the end, she was the only one who got more than 20 percent of the vote. Mrs. Giffey is a fighter with a personality that outshines everyone else.

Besides, she did deliver since she was elected by the House of Representatives 11 months and 21 days ago. Her problem is the fact that Berlin’s voters generally tend to be ungrateful. In the ‘Tagesspiegel’s poll, 59 percent of all respondents said they were dissatisfied with Mrs. Giffey’s performance. But will her problem help Kai Wegner to resolve the issues he is facing? No. By the way: There is someone else who might become Governing Mayor: Bettina Jarasch of the Greens has good chances too. The race is on.