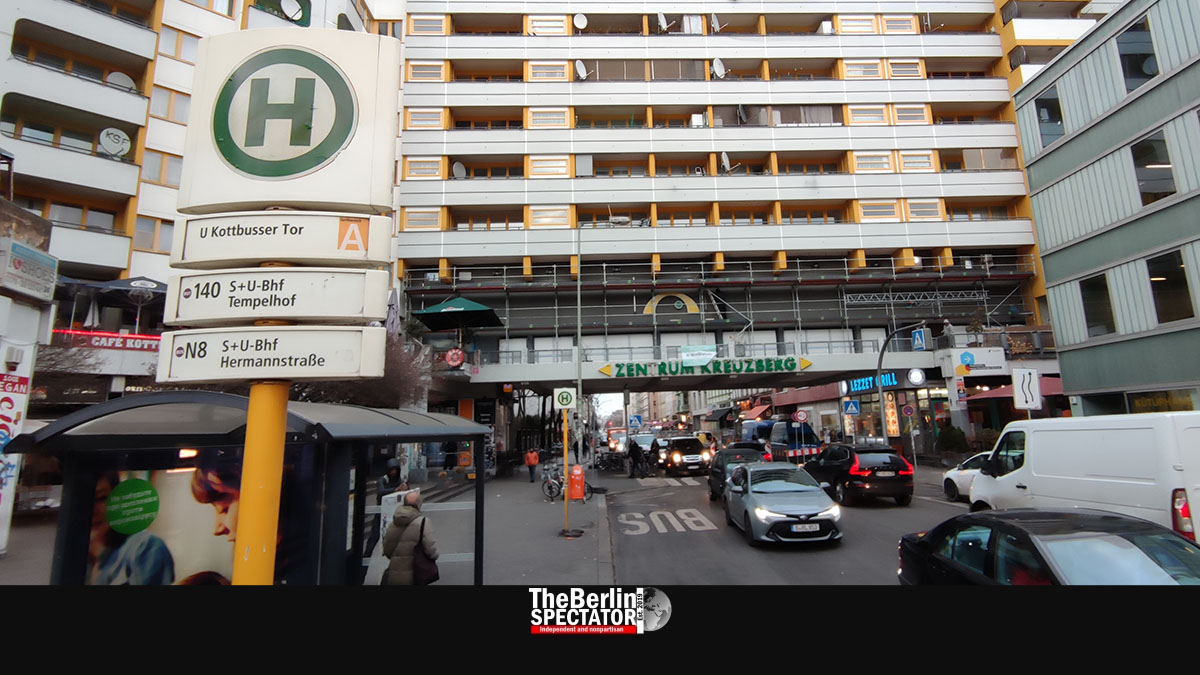 Soon, one of Berlin’s crime hotspots will receive what it should have had for a long time: a police station. The price tag attached to it is big. So are the challenges that need to be met at Kottbusser Tor.

Berlin, December 13th, 2022 (The Berlin Spectator) — A chilly wind is blowing across Kottbusser Tor square on a day in mid-December of 2022. The temperatures are below the freezing point. For this reason, less people are visible. A Turkish vegetable stand that consists of a trailer parked right on the square is on “winter break”, as it says on a little sign. The drug addicts who usually gather in front of a doner kebab place chose to stay downstairs in the much warmer metro station. (Read our separate feature entitled ‘Berlin: Problems Galore at Kottbusser Tor‘.)

On the dirty sidewalk in front of a Rewe supermarket, a young woman and her boyfriend are begging for some cash. Both of them have colorful tattoos all over their faces. In spite of the fact that their situation seems to be hopeless, they manage to make each other laugh all the time, out here in the cold. A few steps away, the owner of one of the many Turkish fast food places on ‘Kotti’ says the new police station was being prepared “up there, on the first floor”. He points towards a famous apartment block with a sign that says ‘Zentrum Kreuzberg’.

The first floor can be reached via stairs attached to the building. An employee in the ‘smoker’s pub’ next to the construction site says the new police station would keep them from setting up tables on the long terrace in front of it in the warm season. A representative of another business located in the same building says setting up a police station at ‘Kotti’ was not a good idea, “because this is the place for people the police are discriminating”.

While police scandals do pop up now and then in Germany, including in Berlin, accusing the German police of discriminating any ethnic or other groups is rather bold, to say the least. But of course there are those who never wanted any police station, including the radical left. Its members have been staging protests against it for months.

Whatever anyone thinks about the police station: It will be opening soon. According to Iris Spranger, Berlin’s Senator of the Interior, it will happen in February of 2023. She told a committee at the Berlin House of Representatives the construction work was on schedule. Some windows and the floor had already been installed.

Now, the Berlin Police Department is looking for the right officers for ‘Kotti’ station. Senator Iris Spranger says she wants cops “with knowledge of foreign languages” who know the location well too. As long as no cops are present in the station, a private security firm is watching the construction site. A few weeks ago, a butanoic acid attack was launched against it.