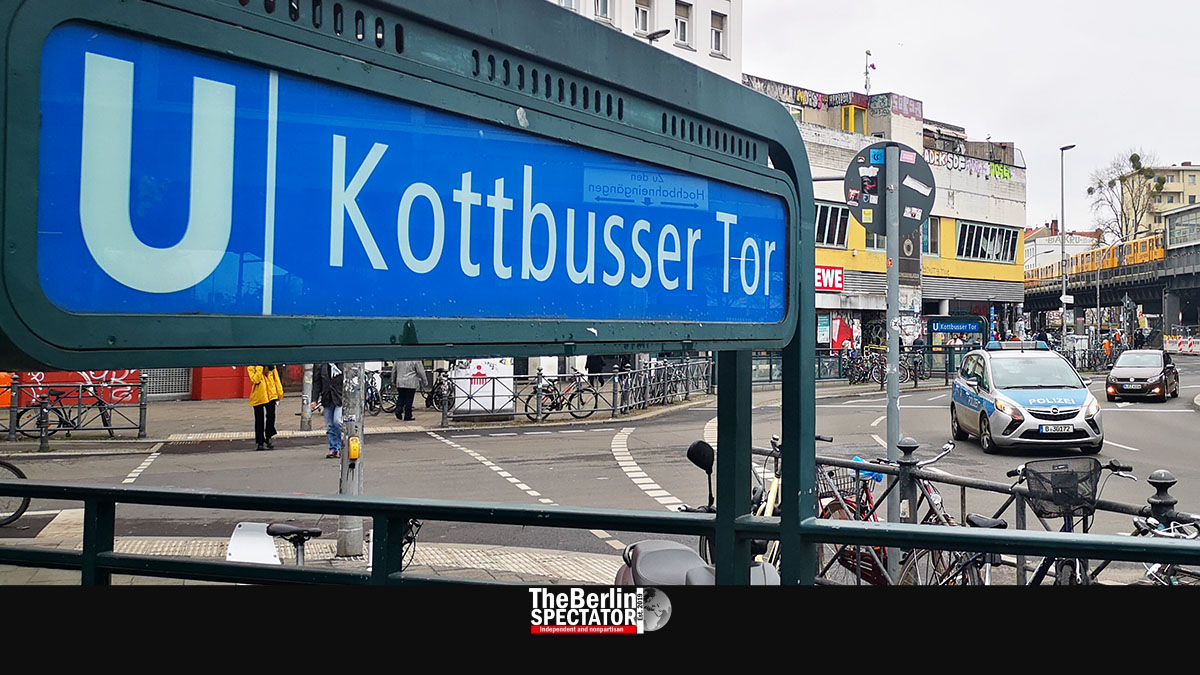 Kottbusser Tor square in Berlin’s Kreuzberg borough is a lively place, but one that is full of problems. In order to resolve some of them, the Senate is setting up a police station right there. Guess what: The endeavor creates new issues.

Berlin, August 23rd, 2022 (The Berlin Spectator) — Kottbusser Tor is a central spot in Kreuzberg. It might be the most active location in Berlin and definitely one of the most interesting ones, but it is also dirty, overcrowded and the level of crime is high. First of all, there is an interchange station. Here, the ‘U-Bahn’ (subway, metro, underground tube) lines U8, U1 and U3 meet.

The underground part of the station smells of urine. During the cold season, homeless people, drug addicts and alcoholics populate the U8’s platform in the basement. They sleep on benches, have loud discussions, throw their trash everywhere and molest passengers. Being here late at night, or even during the day, does not feel safe. The other two ‘U-Bahn’ lines are elevated. Crowds are constantly moving up and down the stairs and escalators.

Under the overhead railway, people can park and lock their bicycles. But when they return, they will have to expect them to be full of bird droppings. On another safety island under the elevated train tracks, homeless individuals spend most of their days and nights in a makeshift camp. It is sad to see the conditions they live in. Once in a while, the city cleaning department sends people with steam jet devices who get rid of the mess. But one person’s mess is another one’s home. Social workers sent by NGOs try to help drug addicts and other people with issues.

Every few days, aid groups send help. They park their vans in the dirt right next to the camp and provide soup, sandwiches and other kinds of lunch, depending on the season. During the first two years of the Corona crisis, homeless individuals were tested for infections. In fall and winter, the wind underneath the overhead railway can be chilly. When it gets too cold, those who live here move into the station.

The same applies to the crowd of drug addicts. When the sun is out, they usually stand a few steps away from the intersection of Kottbusser Tor and Reichenberger Strasse, in front of a döner kebab grill. When rain starts pouring down, they know where to go. Across the street, a large Rewe supermarket attracts alcoholics above all. They enter emptyhanded. Minutes later, they exit the building with vodka, rum or beer paid for with money they begged for on ‘U-Bahn’ trains or on the street.

A big vegetable and fruit stand in front of a Turkish supermarket located right on the square attracts residents from the entire area. Most of them are Turks. The number of Turkish fast food places in this neighborhood is high. Those who want to spend a little more in return for having the opportunity to consume the best döner kebab in the entire city can go to Adalbertstrasse, where Hasir has several restaurants.

There is a lot to see in Adalbertstrasse, no matter at what time you go there. All kinds of food, offered by Asian and Lebanese places are available. Hasir even has a hamburger restaurant, across the street from its two kebab places. The Öz Karadeniz Balıkçısı fish shop offers salmon and all kinds of fish caught in the Baltic Sea and the Mediterranean. This part is actually nice, but loud. When will those construction sites finally disappear? Probably never.

All the time, the police and ambulances show up at Kottbusser Tor. In many cases, cops and medics run down the stairs into the ‘U-Bahn’ station. Here, people get injured. In 2019, a man was pushed onto the train tracks and died. Crime is big at the square and in its vicinity. Theft, robbery and violence are daily occurrences. The severe social problems here add to the problems.

A few years ago, in 2017, the Berlin Senate Administration of the Interior opened a new police station at Alexanderplatz square, another crime hotspot where the situation has improved since, to some extent. This is also about the feeling of safety Berliners have when they see it. Now, the same is supposed to happen at Kottbusser Tor.

But the police station which is being built there is creating problems as well. First of all, the budget literally exploded. At first, the project was going to cost 250,000 Euro (today’s value would be 248,066 U.S. Dollars or 211,150 Pounds Sterling). The Senate’s answer to an official inquiry by the conservative politician Frank Balzer (CDU) at the Berlin House of Representatives shows a slight issue: The price is now 14 times as high as it was supposed to be. The fact that the new budget in the amount of 3.5 million Euro (3.47 million Dollars or 2.96 million Pounds) includes “a provision for unexpected aspects” does not really reassure anyone.

Berlin’s rather large radical left does not want the new police station. What a surprise. On several occasions, they protested against it. “All of Berlin hates the police!” they usually chant at their protests. This is a lie, but one that sounds good to left-wing extremists. Some Berliners who live in the area reject the police station too. They say it would change Kottbusser Tor square. Well, this is the whole point. There are critics who say the decision about the location should have been taken with the residents at Kottbusser Tor. But, since when do people vote for or against police stations? Elected officials do.

There are other critics who do want a police station at ‘Kotti’, but one with a much larger number of officers. While the Senate Administration of the Interior is planning to station 20 cops at the new precinct, three per shift, once it is completed, the German Police Union (GdP), demands more than three times as many.